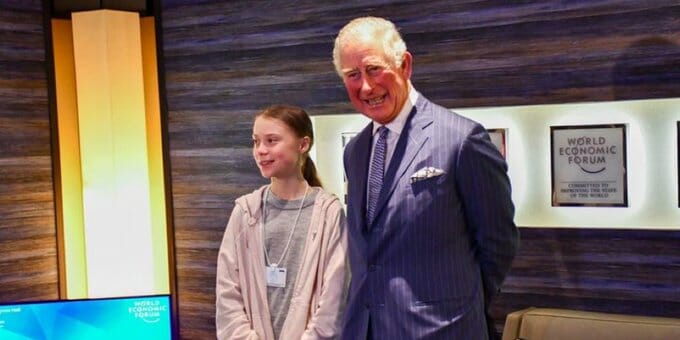 The Mail on Sunday has revealed that in the eleven days leading up to his meeting with Greta Thunberg in Davos, Prince Charles’ private jets and helicopters clocked up 16,000 miles in bringing the royal back and forth from meetings in the UK, Switzerland and Oman.

At a cost of £280,000 to the British taxpayer, and with the trips’ carbon emissions totaling eighteen times that of the average Briton annually, Prince Charles has been left red-faced following his glowing endorsement of the environmentalist cause at the Switzerland meeting of billionaires.

A spokesman for Clarence House defended the prince however, telling the Mail on Sunday that global travel is “an inescapable part” of the prince’s role, something he only does “at the request of the British government”.

At one point during his travel, a new plane had to be dispatched from Luton to Muscat in Oman because the crew of the prince’s other private jet had exceeded their flying time, with other ’empty-leg’ flights contributing to the 16,000 miles.

The prince used an electric Jaguar to arrive at Davos, posing for pictures with climate activist Greta Thunberg, and telling the elite audience that “we simply cannot waste anymore time” and to take “bold and imaginative action.”

Charles then left the World Economic Forum, claiming to have only accepted the invitation to Davos because it was on his way to Israel and thereby cut down on emissions.

Prince Charles and Greta Thunberg are all smiles as they meet for the first time in Davos pic.twitter.com/Ayac6Hu6Ye

Prince Charles flew 16,000 miles on three private jets and a helicopter to pose with @GretaThunberg at #Davos.