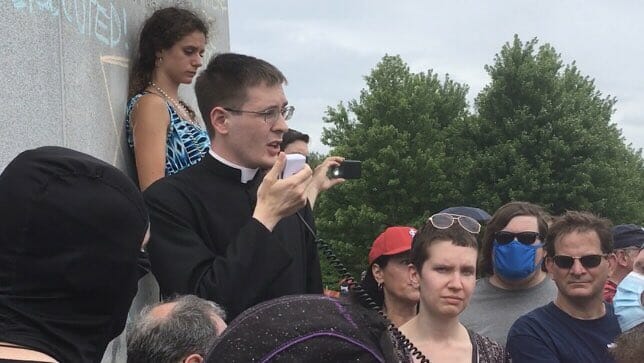 A Catholic priest who stood with members of his flock to defend a statue of a saint in St Louis, Missouri, was shouted down and told the crowd was coming for the cathedral next.

Fr. Stephen Schumacher, a priest of the Archdiocese of St. Louis, endeavoured to speak to the crowd who had come to attack a prominent statue of the city’s namesake and call for its removal last Saturday. The statue, named the Apotheosis of St. Louis, sits in the city’s Forest Park in front of the Saint Louis Art Museum.

The protestors also called for the city, named after the French King Louis IX who was canonized in 1297, to be re-named, saying the Saint and his statue represented “hate”.

The priest was standing with other people of faith who stood in a ring around the statue, with many praying the rosary and singing.

“Saint Louis was a man who willed to use his kingship to do good for his people,” Schumacher said through a megaphone to a crowd of angry protesters seeking to have the statue taken down. He said that the king had “nothing to do with Africans,” and that Arabs had “killed all the Africans in Tunisia” since during the Crusades he fought against Muslim Arabs, who themselves conquered North Africa centuries prior to that.

When the priest urged protesters to go down to the St Louis Cathedral to read his history, he was told “actually we’re taking that too”.

Moji Sidiqi of the Regional Muslim Action Network, who helped to organizer of the protest, told the St. Louis Post-Dispatch that “It’s a revolution. It’s time for change … right now, our number one mission is to take this thing down and sit down with people who want to see positive change take place and continue to heal our country.” She added that the city should be renamed.

While critics charge that St Louis led Crusades, the Archdiocese of St Louis said the saint and ruler of France during the 13th century “opened hospitals and shared his daily meals with beggars”.
“The reforms that St. Louis implemented in French government focused on impartial justice, protecting the rights of his subjects, steep penalties for royal officials abusing power, and a series of initiatives to help the poor,” the archdiocese said.
“He personally paid to feed more than 100 poor Parisians every day. His care for the sick was equally moving; St. Louis frequently ministered to lepers. He also created a number of hospitals, including one for the blind and another for ex-prostitutes,” they continued in a statement.