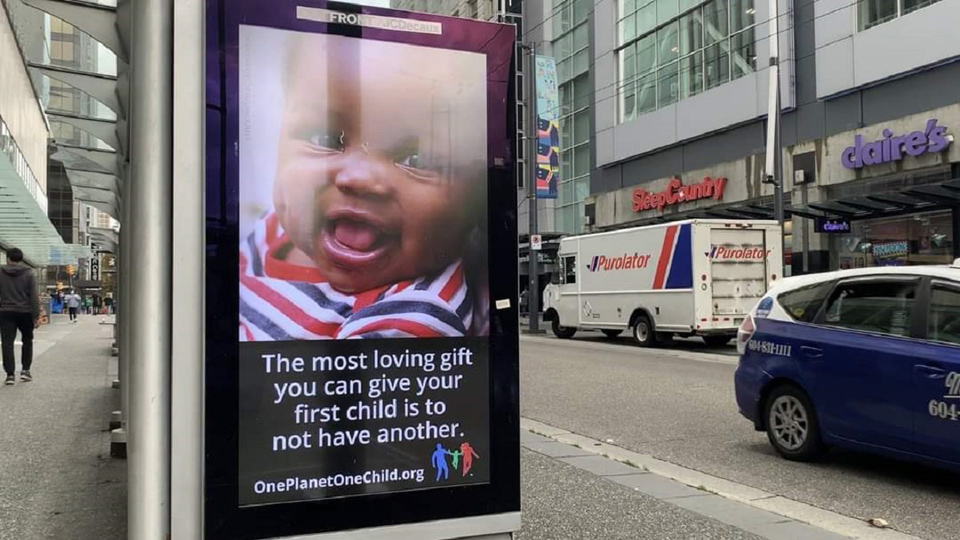 Today I thought that I’d draw your attention to a particularly repulsive ad that graces a bus stop in Vancouver. The ad features a picture of a cute baby, smiling, looking with joy out at commuters. Underneath it, the ad says: “The most loving gift you can give your first child is not to have another.”

The ad is one of a series (another notes that “conservation begins at conception”) paid for by World Population Balance, a non-profit organisation from the United States. Dave Gardner, the executive director of the group, says that it supports an “ethical, humanitarian and voluntary” solution to overpopulation. The ads are designed to bring sunlight to the overpopulation problem “that’s been brushed under the rug for so long because it’s uncomfortable for some people to talk about”.

Is it just me, or is there something comically backward about trying to encourage Canadians in 2020 to limit themselves to one child? It seems to have come straight from a population panic brochure from the 1970s when Malthusian concern was rife and before the impacts of the green revolution had been felt.

It also is less forgivable than that panic was, because in the meantime we have seen this sort of thinking lead to coercive family planning policies in many countries around the world (most notably China). But even in Canada, women were forcibly sterilised as recently as 2018.

In 2016, Canada’s total fertility rate was well below replacement at 1.5 children per woman and was falling further. There is a strong possibility that the uncertainty in the wake of the pandemic will only have pushed Canada’s fertility downwards. In short, Canada is not a country that is growing the global population.

And as has been noted before, global environmental issues like climate change are not down to population – but to consumption. Placing the emphasis on population is a way of ducking the hard stuff: having to change one’s own lifestyle. Population panic is so passé.

Aside from that, the idea that consciously choosing to withhold siblings from your first child is a “loving gift” is just grotesque. Shannon has written before about the “little emperor” phenomenon, a term that comes from China and its generations of only children. Siblings help to rub the hard edges off children, help us to work with others and to see that life is not all about our wants, desires and needs – sometimes we must defer to others, think of others. Siblings provide a perfect way to learn this from an early age. While we might think that lavishing undivided attention and money on one child is a gift to them, in reality it risks turning them into spoiled children and selfish adults.

Also, as a final observation, isn’t it interesting that the ad features a black baby? Is there any intention to stir up thoughts of overbreeding Africans? (Which is a tendency among population panic-mongers I noted a decade ago…)