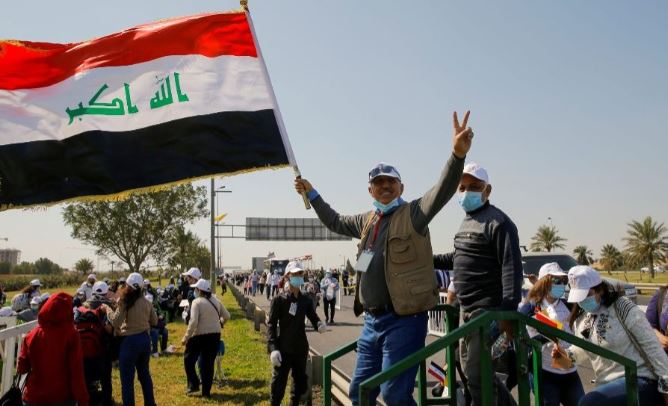 Pope Francis has urged Iraqis of all faiths to “look beyond our differences” in seeking a peaceful resolution to years of chaos and bloodshed in the war-torn country.

Calling for an end to “acts of violence and extremism, factions and intolerance”, the pope remarked on the “age-old presence of Christians in this land, and their contributions to the life of the nation.”

Francis (84) told reporters he was happy to resume travel after being “caged” in the Vatican for a year, and now came to the Middle East as a “pilgrim of peace”.

“I’m happy to resume travel, and this symbolic trip is also a duty to a land that has been martyred for years,” he said.

“Only if we learn to look beyond our differences and see each other as members of the same human family will we be able to begin an effective process of rebuilding and leave to future generations a better, more just and more humane world.”

The pope was met by Prime Minister Mustafa al-Kadhemi at Baghdad International Airport, who welcomed Francis as the first pontiff to visit Iraq.

“With love and peace, Iraq’s people and government are welcoming His Holiness Pope Francis and reaffirming the depths of this humanitarian bond,” Kadhemi said.

The pope also met with President Barham Salih, telling an audience gathered at the presidential palace that Iraqis of every faith deserve the same rights as the Shiite majority.

The pope, who was vaccinated several weeks ago against Covid-19, has pledged to shake as few hands as he can.

“I’ll try to follow directions and not shake hands with everyone, but I don’t want to stay too far,” he explained to reporters.

The four-day trip will include visits to churches and communities ravaged by war and persecution, in a country which has seen its Christian population fall from 1.5 million in 2003 to 400,000 presently.