The pope’s message offers hope to a fearful world 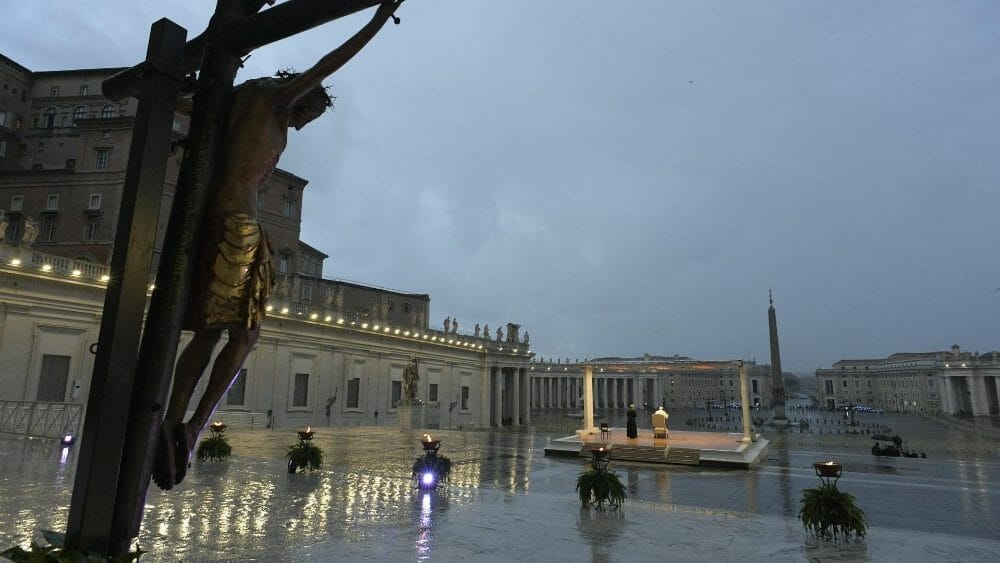 It was a eerie sight. The lone figure of the Vicar of Christ on earth standing under a canopy in the rain-drenched esplanade of St. Peter’s Basillica in Rome addressing the world, Urbi et orbi.

A little short of one year earlier he imparted the same traditional blessing to something in the region of a hundred thousand pilgrims gathered in the same esplanade. What apocalyptic event had brought this year’s blessing about? We know the answer well enough – and few will argue that the ‘A’ word is overstating reality.

For some, perhaps for many, thinking and talking about death betrays a morbid obsession. For others it is a truly liberating preoccupation, for it is an engagement with a reality, a gate through which we enter on the Way to nothing less than Truth and Life itself.

The message of that evening was about hope; hope in the face of fear – for fear is what now is predominantly in the hearts of mankind, the fear of death. But the message of hope was centred on the answer to that question asked by Christ of those fearful disciples who called out to be saved from what looked to them like certain death. Why are you afraid? Have you no faith?

The Scriptural apocalyptic vision of death describes it as coming accompanied by and through the three-fold agency of Famine, War and Pestilence. In the lifetimes of those of us present on this planet today the former two have been, sadly, familiar enough. The latter, in the terms in which it threatens us today and now – the prospect that it would bear away, as some experts estimate, 40 million of us were it to get out of control – is a new experience. But in all this there is also an invitation to each one of us to reflect on the true nature of that fourth horseman – is he friend or is he foe?

He is friend for he is the bringer of wisdom. Don’t be afraid of death. Accept it from now on, generously… when God wills it, where God wills it, as God wills it. Don’t doubt what I say: it will come in the moment, in the place and in the way that are best: sent by your Father-God. Welcome be our sister death! These are the words of St. Josemaria Escrivå. (The Way, 739)

The wisdom which the Christian life embodies encompasses both a glorious rejoicing in the gift of life and a peaceful acceptance of the inevitable moment in which we will pass from this temporary sojourn to an eternal joy. What Pope Francis reminded us of emphatically was that faith is the antidote to fear. His words were also a reminder and an encouragement to fight together those three humanly engineered real enemies of mankind, War, Famine and Pestilence. We know that Death came into the world through the willful folly of our race. But we also know that the act and witness of Christ’s death on a Cross, followed by his Resurrection, has totally changed its meaning for mankind and is now in itself a reminder to us of the true meaning and ultimate end of our existence.

Napoleon Bonaparte, approaching death on the bleak South Atlantic Island of St. Helena, reflected on his self-absorbed life and the turbulent events of his time. In doing so, with the help of his sister Death, he finally and peacefully saw the true measure of the significance of life, fame and human glory.

St. John Henry Newman recalled – in The Grammar of Assent – that in the solitude of his imprisonment, and in the view of death, Napoleon was said to have reflected on the motivations of his years in pursuit of glory.

“I have been”, he said, “accustomed to put before me the examples of Alexander and Cæsar, with the hope of rivalling their exploits, and living in the minds of men for ever. Yet, after all, in what sense does Cæsar, in what sense does Alexander live? Who knows or cares anything about them? At best, nothing but their names is known; for who among the multitude of men, who hear or who utter their names, really knows anything about their lives or their deeds, or attaches to those names any definite idea?”

“ But, on the contrary ” he is reported to have continued, “ there is just One Name in the whole world that lives; it is the Name of One who passed His years in obscurity, and who died a malefactor’s death. Eighteen hundred years have gone since that time, but still it has its hold upon the human mind. It has possessed the world, and it maintains possession.

“Amid the most varied nations, under the most diversified circumstances, in the most cultivated, in the rudest races and intellects, in all classes of society, the Owner of that great Name reigns. High and low, rich and poor, acknowledge Him. Millions of souls are conversing with Him, are venturing on His word, are looking for His presence. Palaces, sumptuous, innumerable, are raised to His honour; His image, as in the hour of his deepest humiliation, is triumphantly displayed in the proud city, in the open country, in the corners of streets, on the tops of mountains. It sanctifies the ancestral hall, the closet, and the bedchamber; it is the subject for the exercise of the highest genius in the imitative arts. It is worn next the heart in life; it is held before the failing eyes in death.

“Here, then, is One who is not a mere name, who is not a mere fiction, who is a reality. He is dead and gone, but still He lives,—lives as the living, energetic thought of successive generations, as the awful motive-power of a thousand great events. He has done without effort what others with life-long struggles have not done. Can He be less than Divine? Who is He but the Creator Himself; who is sovereign over His own works, towards whom our eyes and hearts turn instinctively, because He is our Father and our God?”

And it was to Him, two hundred years after Napoleon uttered those wise words,  that Pope Francis once again drew the city of Rome and all the cities of the world to ask for help today as we face the rampaging Third Horseman of the Apocalypse, asking for help to deal with the multiple devastations he will bring in his wake. But the miraculous crucifix which was so central in the images relayed from St. Peter’s on March 27 reminded us powerfully of the truth that death itself is not a fearful thing, but is the true beginning of all Wisdom and Life.

Hypocrites: why Leo Varadkar can break the Covid rules but Dominic Cummings can’t