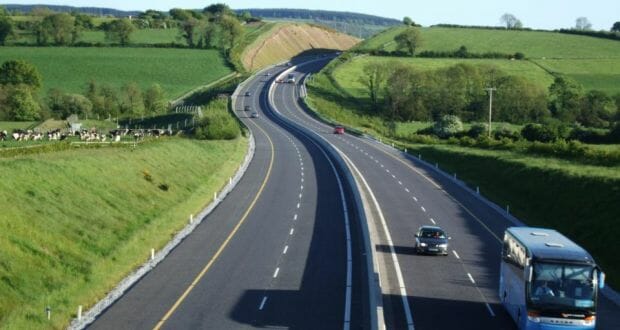 Green Party's Ossian Smyth TD says M20 will not happen within the next five years, says it is not in favour of increasing capacity between Cork and Limerick #iestaff

OH YES IT IS, says Fine Gael Minister and Limerick TD, Patrick O’Donovan, with the emphatic backing of his party:

'Limerick to Cork M20 motorway will not be side-tracked'

To be clear, there’s nothing in the programme for Government on this specific subject either way. The only commitment that’s in there is that for every penny spent on the Cork-Limerick motorway, Fine Gael and co will have to spend two pennies on bicycles and that sort of thing.

The road in question is scheduled to cost about a billion euros, so, well, that’s a lot of bikes.

Humour aside, there are a whole lot of competing political objectives bound up in this particular road. For one thing, it’s been promised, but not delivered, for years now. Those of us who drive the Limerick to Cork route occasionally know what a frustrating journey it is, with the road narrowing at points to not much more than a country by-road, and numerous very slow towns to pass through on the way. It’s a popular project in the region, and considered to be of economic importance by businesses in both cities.

For another thing, it’s a road to Cork. That wouldn’t matter in most circumstances, but remember that Micheál Martin is going to be the Taoiseach. A Cork Taoiseach who can’t deliver a road to Cork will not be fondly remembered in the City.

On the other hand, it will, no doubt, increase traffic overall, and if there’s one thing that really grinds green gears, it’s the idea of increasing traffic, and therefore, emissions. They’d be much happier with a Limerick to Cork rail connection, or, failing that, a bikeway.

Stopping the road would be a huge symbolic win for the Greens in that it would be a definitive signal that we were going to do things differently with them in charge. But it would come at a real political cost to FF and FG TDs in the region, and they’ll fight it tooth and nail. And all of this is before they even go into Government together.

This isn’t the only big green project cancellation that’s in doubt, either. Look at this, on the big Green win of cancelling the Shannon Liquid Natural Gas terminal:

The programme for government is a con. Shannon LNG is still going ahead – and nothing in the #PFG on Cork LNG either. A FF/FG/Green government would oversee the construction of fossil fuel infrastructure – Grassroots Greens should reject the deal! pic.twitter.com/uDjLLNInej

They’re not even in the door yet, and there’s FF’s Michael McGrath seeming to offer some hope to the people behind the Shannon LNG, even as the project was ceremoniously burned (in a carbon neutral fashion) on the altar of the programme for government.

Five more years of these rows to look forward to, folks.