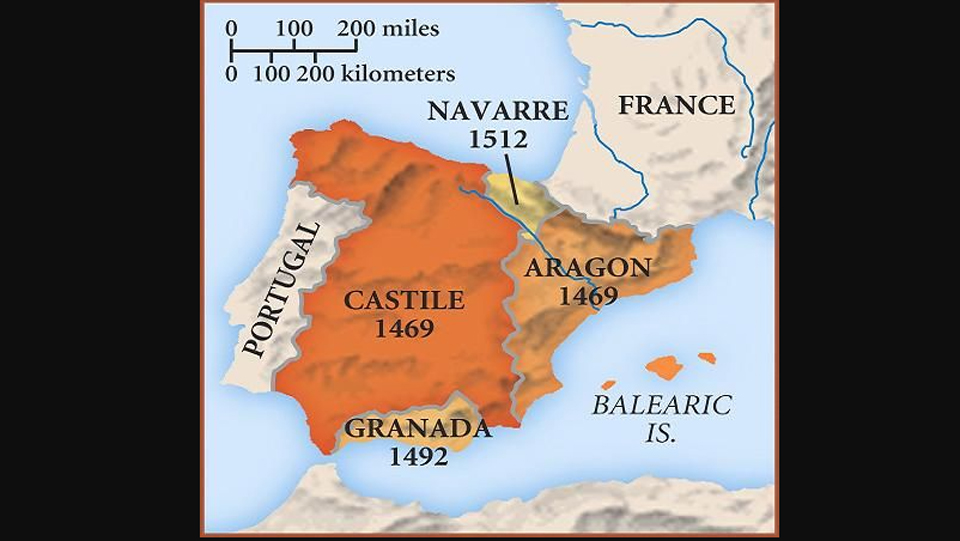 King Ferdinand II of Aragon married Queen Isabella I of Castille on this day, October 19th, 1469. The marriage unified the two Kingdoms into one, creating the Kingdom of Spain, which exists to this day.

As you can see in the map above, at the time of the the marriage, modern Spain was divided in two. The Kingdom of Castille, headquartered in Madrid, had emerged in the ninth century, and grown in size and power over hundreds of years. Aragon,

Spain had been conquered by the Umayyad muslims in the 700s. The history of the peninsula – known as the Reconquista – since that time can be summarised as a series of wars by Christian dukes and kings to re-conquer territory from the Muslims. Initially, these comprised a series of smaller Kingdoms – Asturias, Navarra, Leon, Barcelona, Aragon, and Castile. Over time, Castile and Aragon swallowed the others up by conquest and marriage.

Castile comprised most of central and western Spain. Aragon, by contrast, held most of the Catalan territories, and Barcelona. These two Kingdoms opposed the Muslims in the South and, historically, each other.

The marriage in 1469 put an end to the squabbles between them, at least for a period of time. After the death of Ferdinand and Isabella, the crowns of both Kingdoms were inherited by their only daughter, Joanna the Mad. In turn, her son, the much more sane Charles V, Holy Roman Emperor, and King of Spain.

Today, of course, much of the old Kingdom of Aragon still contains a strong separatist movement. The Catalan people have repeatedly sought independence from Spain, and the rivalry between Barcelona and Madrid – on matters ranging from politics, to culture, to football – is as strong as ever.

And it all dates back to a marriage that took place on this day, October 19th, 1469.

ON THIS DAY: 17 SEPTEMBER 1683: Report of the first existence of bacteria