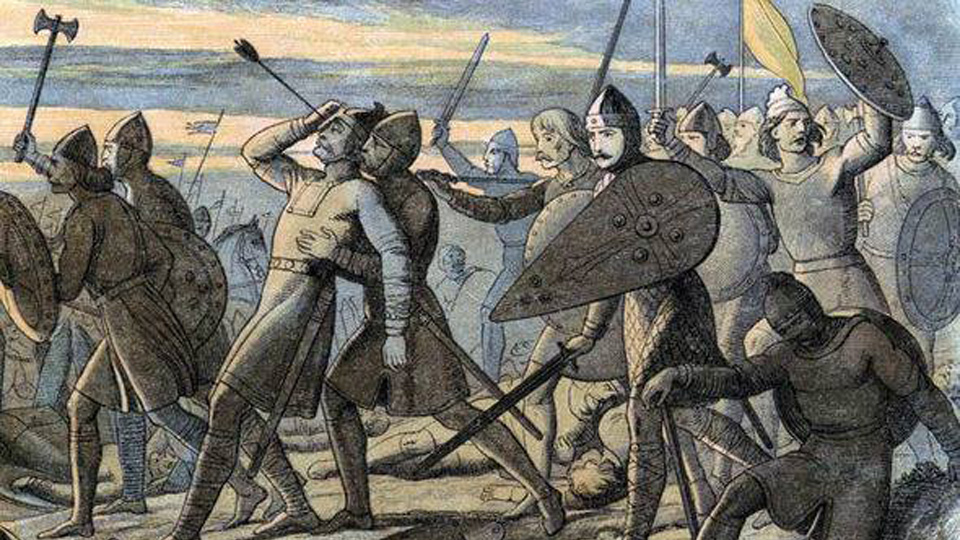 The Battle of Hastings, which decided the fate of England, was fought on this day, October 14th, 1066, between the Anglo Saxon forces of the English King Harold Godwineson, and the Norman army of the Pretender, William the Bastard, Duke of Normandy.

The battle ended with a decisive victory for William, and the death of Harold, who is said to have been killed by an arrow that pierced his eye.

The Norman forces entered the battle in a much better condidtion than their Anglo Saxon opponents. William had landed in England two weeks earlier, and his men had had time to rest and refresh themselves.

Harold’s forces, by contrast, were at the end of a long, forced march the length of England, having already won a war against another invader – Harald Hardrade, King of Norway.

While everybody knows who won the battle of Hastings, few know that it was a very close run thing, decided only by a critical mistake in the heat of battle.

In the Anglo Saxon’s favour was the terrain. Harold managed to seize for himself the high ground on the battlefield. He managed to deploy his forces at the top of a steep slope, flanked on one side by woods, and on another by marshland. William, at the bottom of the hill, would have to fight his way to the top.

For the first part of the day, William’s archers shot uphill, into the Anglo-Saxon shield wall, to little effect. The uphill angle meant that most arrows either missed, or bounced harmlessly off shields.

William then sent his spearmen forward to engage the Anglo Saxon forces. But Harold’s archers, who had stayed silent as the Normans fired, now unleashed a barrage of missiles at William’s advancing forces, coming up the hill. After bloody losses on the way up, and brutal combat at the top, William’s forces retreated in disorder.

What was worse than this was that a rumour spread through the Norman ranks that William was dead. This led to the beginning of a general rout. And it was in that moment that Harald made his fatal mistake.

Thinking that the battle was won, he – or someone close to him – ordered the Anglo Saxon force to abandon their hilltop position and charge the Normans.

But in so doing, they gave up their main advantage. And William still had one trick left – his superior cavalry.

As the Anglo Saxon’s advanced, the Duke himself appeared on horseback, in the middle of the fray, and led a charge into the advancing army of King Harold. Seeing this, his own men turned and joined him, leaving to an open battle on the bottom of the hill, where the Anglo Saxons had no chance against the superior Norman weapons and armour.

When, exactly, Harold was killed, nobody knows. But across that afternoon, his army was destroyed, and his Kingdom lost. The following day, William began his march on London, where he was crowned King of England on Christmas day. Over the following two centuries, his descendants would extend Norman rule to Wales, Ireland, and Scotland.

History might have been very different if, on this day in 1066, Harald’s men had stayed, safely, at the top of their hill.

ON THIS DAY: 15 September 1928: Discovery of Penicillin

ON THIS DAY: 13 OCTOBER 1881: Charles Stewart Parnell and other Land League activists arrested