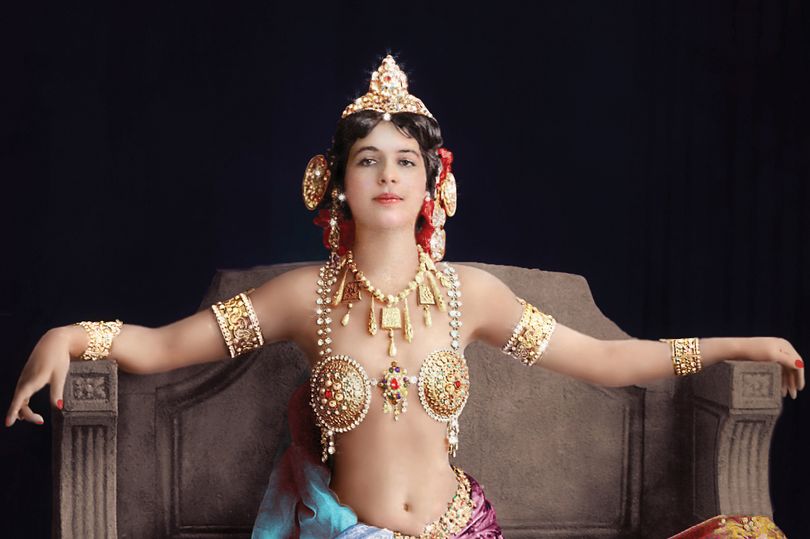 Margarethe Zelle, known to history as Mata Hari, was executed by firing squad by the French Government on this day, October 15th, 1917, after admitting to being a spy for the German Empire. She is one of history’s best known spies.

An exotic dancer and courtesan, Zelle was born in the Netherlands in 1876. She moved to Paris in 1903, where she worked as an exotic horse rider in the circus. Struggling to earn a living, she also worked as a nude model for aspiring artists.

Growing in fame in Parisian circles in the early 1900s, she became the mistress of a prominent French industrialist, Emile Guimet. This gained her fame, and access to elite circles in France. By the time of the outbreak of the war, she was one of the most famous – and controversial – entertainers in Europe, known for exotic – and usually nearly nude – dancing.

She was also, by this time, earning money for herself as a high class prostitute. She had relationships with many high-ranking military officers, politicians, and industrialists in France, and elsewhere.

In World War One, her native Netherlands remained neutral. This meant that, as a Dutch Citizen, she could cross borders freely. Before the war, she had danced for the German Crown Prince – this immediately drew French intelligence upon her. And they recruited her early in the war – giving her the mission of seducing, sleeping with, and gaining intelligence from, the Kaiser’s eldest son.

In fact, Hari decided to become a double agent. Upon meeting the Germans, she immediately began to provide them with secrets she had obtained from her liasons with French officers. But the intelligence she provided to the Germans was very poor – mainly concerned with gossip in Paris, and the sex lives of the French aristocracy.

The Germans did not like the fact that she was taking their money and giving them nothing of value in return, and so, in 1016, German General Walther Nicolai decided to end Germanys’ relationship with her by exposing her as a spy to the French. He deliberately allowed messages about her spying to be broadcast on uncoded German radio messages, alerting France to her treachery.

She was arrested in a Parisian Hotel room in February 1917. She strongly protested her innocence, including with the phrase, “Am I a whore? Yes. But a traitoress? Never!”

Hari was accused of causing the deaths of 50,000 allied soldiers through her spying for Germany – an absurd accusation, since the Germans themselves had burned her for not providing useful intelligence.

Hari admitted during her interrogation that she had accepted 20,000 francs from the Germans to spy for them, but claimed that she had only ever provided them with useless information, and had stayed loyal to France – a claim, we now know, that the Germans agreed with. But at the time, it must have sounded implausible.

She was found guilty, and sentenced to death.

Taken before the firing squad, Mata Hari refused the offer of a blindfold. In her last act, she blew a kiss to the 12 French soldiers tasked with killing her.

She was shot with ten bullets immediately thereafter, and died, on this day, October 15th, 1917.