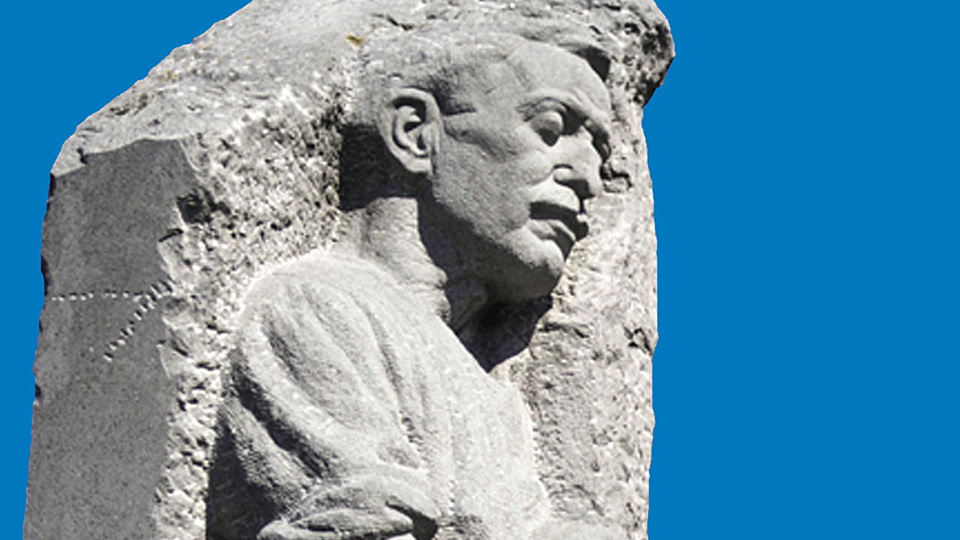 Matt Talbot died of a heart attack in Granby Lane on Trinity Sunday, 7 June 1925, whilst making his way to Mass in St. Saviour’s Church on Dominick Street.  His life would have gone unnoticed were it not for the cords and chains discovered on his body when he died suddenly that day. No one at the scene was able to identify him but his story and his penitential regime quickly filtered though the community and there were many spectators when his funeral took place at Glasnevin Cemetery on 11 June 1925.

He was buried the following Thursday on the feast of Corpus Christi, in Glasnevin Cemetery. His hidden life of exemplary holiness became apparent to those who found him and cared for him and arranged his funeral and burial. Many years later, in 1952, Matt’s remains were exhumed and placed in a double coffin and re-interred in a vault in the centre of Glasnevin Cemetery. The title ‘The Servant of God, Matt Talbot’ was inscribed on the coffin and his grave became a place of pilgrimage for people from all over Ireland and indeed the world. In 1972 Matt Talbot’s remains were removed to their present resting place in the Church of Our Lady of Lourdes, Seán McDermott Street, where pilgrims can pray and see his coffin through a glass panel. Other places of interest for those who wish to seek his intercession are of course Granby Lane, marked by a plaque, opposite where he died, on the walls of the Salvation Army hostel, demonstrating that addiction distinguishes between neither class nor religion, and by a cross on the railings near the exact spot.

Matt was born on 2 May 1856 at 13 Aldborough Court, Dublin, the second eldest of twelve children of Charles and Elizabeth Talbot, a poor family in the North Strand area. His father and all but the oldest of his brothers were heavy drinkers. Matt received only one year of schooling before he was forced to find a job, which he did, in a bottling company. In 1868 Matt left school at the age of twelve and went to work in a wine merchant’s store. He very soon began “sampling their wares”, and was considered a hopeless alcoholic by age thirteen. He then went to the Port & Docks Board where he worked in the whiskey stores. He ran up large debts; penniless one evening at the age of 28, he waited outside a pub hoping that one of his friends would buy him a drink. They did not and he went home in disgust announcing to his mother that he was going to take the pledge. It was the start of his sobriety with the help of a friend and priest, daily mass and constant prayer, he repaid all his debts and turned a new life.

He was a very hard worker and set about modelling his life on that of the Irish monks of the 6th and 7th centuries. It was and is a tough programme of prayer, fasting and almsgiving. He gave away most of his wages every week to the poor at home and abroad. He was also keenly aware of his fellow workers struggle for social justice. A loyal member of Ireland’s Transport and General Workers Union, a Union leader, Stephen McGonagle, describes him as “a beacon of light to Irish workers”. He lived a life of heroic perseverance.

The official Church began in 1931 to take an interest in Matt’s life of heroic sanctity when Archbishop Edward Byrne started a sworn enquiry, and this led to a similar Vatican enquiry in 1947, which led the humble Dublin labourer to be publicly venerated at his shrine in the heart of the poorest part of the city and honoured with the title of ‘Venerable’.

Matt needs two miracles to rise from ‘Venerable’ to ‘Sainthood’. His cause for canonisation is with the Church; his statue stands at the south end of the Liffey, by the bridge named after him. He is the patron saint of alcoholics and those suffering with addiction.

This is a man who said to his sister: ‘Never look down on a man who cannot give up drink, it is easier to get out of hell.’ This humble Dublin labourer, who in his adult life had to teach himself to read and write, has left the world the most concise and most simple and practical guide to the spiritual life and holiness, it is as follows: ‘Three things I cannot escape: the eye of God, the voice of conscience, the stroke of death. In company, guard your tongue. In your family, guard your temper. When alone guard your thoughts.’