ON THIS DAY: 4 May 1916: Poet and Revolutionary, was executed for his leadership of the Easter Rising 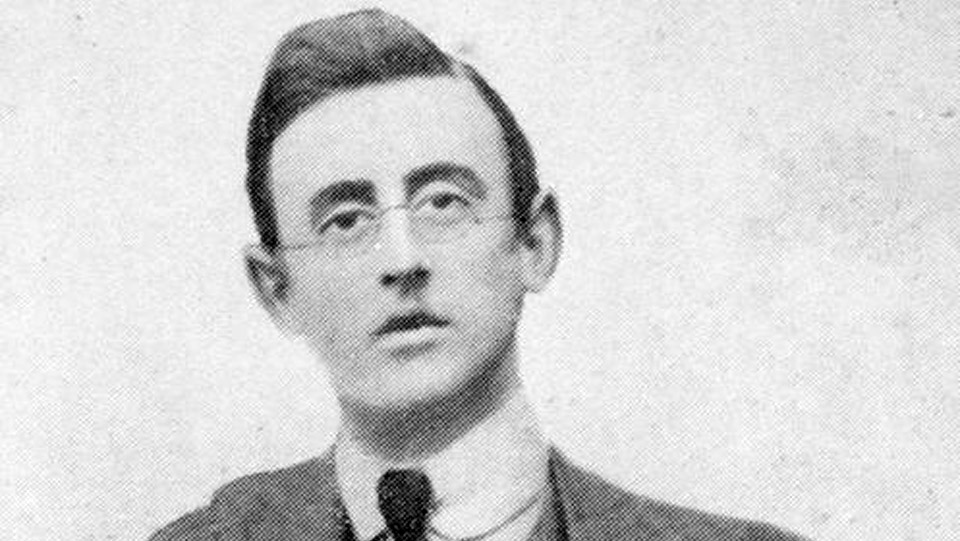 In her biography of the 1916 proclamation signatory, Joseph Plunkett, Honor O Brolchain tells a fascinating story.

A Dublin jeweller on the afternoon of May 3rd 1916 was attending to a young lady who was purchasing wedding bands. She bought two rings but seemed very upset. When he asked her what the matter was she confessed that she was about to get married but that her fiancé was condemned to execution before a firing squad at dawn.

The jeweller knew very well who the young woman was talking about and before Grace Gifford had married Joseph Plunkett in the chapel at Kilmainham at around 8pm that night their story had spread around the city. It was a sensational story which tugged at the heartstrings and was on the front page of the morning newspapers just hours after Plunkett had been shot by a firing squad.

As the story formed from the reports of witnesses over the weeks it took on mythical status. The essential facts of the story were that Grace Gifford was allowed attend the prison chapel at Kilmainham jail and Joseph Plunket was brought in in handcuffs. They were removed and the wedding ceremony was witnessed by two guards who held rifles to attention while the priest performed the sacrament. It took just ten minutes and Plunkett was returned to his cell immediately. Gifford was allowed visit him for ten minutes in his prison cell watched over by two guards with shouldered rifle and bayonet glinting in the light of a single candle.

Seven hours later Plunkett lay dead on the stones of the Stonebreaker’s yard of Kilmainham, his blood pooling beneath him.

In an atmosphere where sympathy was turning towards the revolutionaries, this tragic story no doubt created an empathic shift in the public sentiment towards the Rising.

That oft remarked upon attitude towards the Rising was a complex set of emotional reactions and loyalties. It’s understandable that some people felt betrayed that a revolution struck at home while attention was faced outwards to a common enemy in Europe. Many had relations fighting that war and many had received death notices from the trenches of France, Belgium, and Gallipoli. Many others had received the returned soldiers back to their homes broken in body and mind.

But there was also a strong sentiment that the empire was rotten to its core, and that the war effort was been paid for with the blood of the young. The poverty of the Dublin slums, and the legacy of the famine was known by all.

People could even contain both of these conflicting feelings at the same time. Pearse was correct in his assessment that England’s difficulty was Ireland’s opportunity. He was also correct in his assessment that Ireland would judge them (the Rising’s participants) differently in time. Perhaps the sentimental human tragedy of Joseph Plunkett’s marriage to Grace Gifford was the floodgate moment that changed the overwhelming colour of the public mood for good.

Joseph Plunkett was remarkable in many ways. Just days before the Rising he was told by his doctor that he would only live a matter of weeks. In a strange way he cheated his prognosis as it was not his ulcerous TB that killed him, but a firing squad.

He marched to the GPO on Easter Monday morning with a dandy scarf around his neck, hiding an ugly and terminal tubercular ulcer and, exhausted, lay down on a mattress in the Rising’s headquarters.

He had contracted TB as a young boy from infected milk and suffered for the rest of his life with recurring bouts of this terminal illness. He had a voracious appetite for learning, and when he was ill he frequently read a book a day. When he was able, he turned his learning into a prolific output of poetry, writing, and arts and cultural activity. Being disillusioned with the Abbey, he founded a theatre company along with Thomas MacDonagh which staged plays that probed more modern themes. He was familiar with the newer development in European theatre and had the likes of Ibsen performed in his theatre in Hardwicke Street.

Perhaps because of his severe and regular remissions of TB his poetry was informed by a spiritual outlook. He was known as a mystical poet, and his poetry frequently undertakes the search for the transcendent in elegantly visual imagery. ‘I see His Blood upon the Rose’ gives us the majestic and naturalist comprehension of the ever present creator

“All pathways by his feet are worn,
His strong heart stirs the ever-beating sea,
His crown of thorns is twined with every thorn,
His cross is every tree.”

His poetry is very popular in India where it is examined for this spiritual outlook.

He spent some time in North Africa and was very interested in Egyptology. Egyptology at the time was the semi-structured scientific phase that bridged antiquarianism to modern archaeology, and it was in this time that we (in western society) started getting an evidence based understanding of the society and beliefs of ancient Egypt.

In this context the imaginative and mythical imagery of Plunkett’s epic poem ‘Lex in Tenebris’ makes a lot of sense, for it seems to draw heavily on the mythological imagery of The Egyptian Book of the Dead.

The Egyptian Book of the Dead is an ancient Egyptian hieroglyphical scroll which was ceremoniously buried with Egyptian of means. It contains a set of instructions for how to navigate the trials which the Egyptians believed preceded entry into the afterlife. It describes a journey where the dead soul must account for itself and is faced by many moments of truth. At each of the trials a deity stands in the way of the seeking soul and will only let it pass upon a satisfactory response or completion of the trial. The Book of the Dead contained spells and incantations that the soul would use at these moments.

Plunkett used this idea of a trial to achieve transcendence, to portray a euphoric triumph of love.

I fought unknown inhuman foes
And left them in their battle-throes,
Hacked a way through them and advanced
To where the stars of morning danced
In your high honour, there I stood
To see you, till the morning-flood
Burst from the sky—but your sunrise
Striking my unaccustomed eyes

It may be less spiritual than his Blood upon the Rose, but it has a brilliant portrayal of the swell of possibility that comes with daring action. A bit like his Easter rebellion.

In heart and eyes a drunken flame
That sang and clamoured out your name,
And woke a madness in my head.
The enemies I had left for dead
Surrounded me with gibbering cries
And mocked me for my blinded eyes.
I curst them till they rose in rage
And flung me down a battle-gage

Joseph Plunkett was executed on May 4th 1916,  with William Pearse, Edward Daly and Michael O’Hanrahan,  for their role in the Easter Rising.