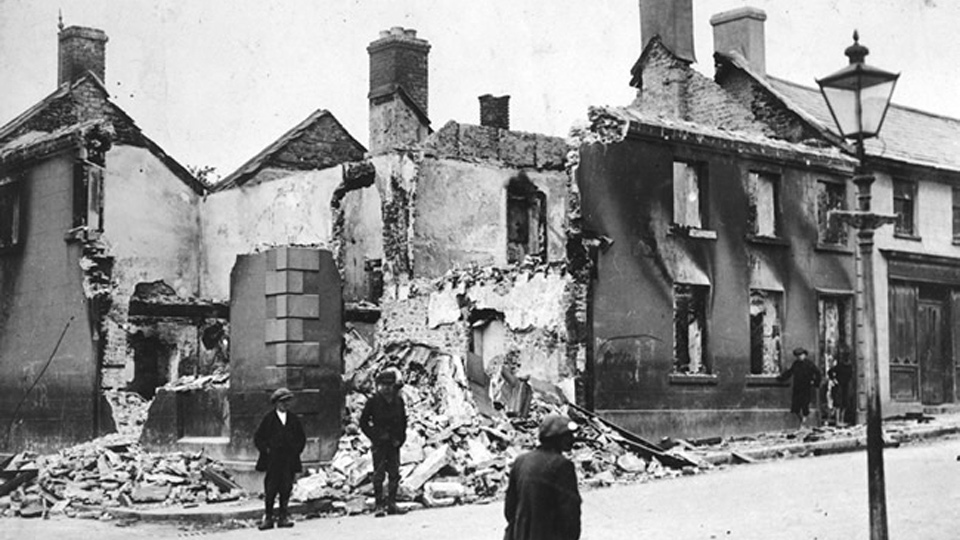 “The town of Balbriggan they’ve burned to the ground
While bullets Like hailstones were whizzing around;
And women left homeless by this evil clan.
They’ve waged war on the children, the bold Black and Tan.”

(From the ‘Bold Black and Tans, Irish Songs of Resistance, Galvin, 1950)

The sack of the north Dublin town of Balbriggan by the British forces known as the Black and Tans took place 100 years ago today. The atrocity, and the rampant nature of the violence, killing, looting and burning,  drew international condemnation.

On the evening of September 20, 1920, Constable Peter Burke and his brother, Sergeant Michael Burke, stopped off for a drink with several of the Black and Tans in Smyth’s pub in Balbriggan, then a quiet fishing village. A brawl broke out, and an IRA unit arrived. Eyewitnesses claimed that the RIC charged the IRA men who then shot Peter Burke dead, injuring his brother badly.

At 11pm that night some 150 of the Black and Tans, many of whom appeared to have been heavily drinking, descended on Balbriggan from nearby Gormanstown army camp. They proceeded to “shoot, burn and loot the town in a systematic spree of horrifying violence”, according to the Drogheda Independent.

Forty homes were burned out or badly damaged, including almost all of the main street of the town. The terrified townspeople fled into the dark countryside, with many being forced to sleep outdoors for several nights in fear of their lives.

Four pubs were also looted and burnt down. One was owned by John Derham, a Sinn Féin town commissioner, who was beaten as he was arrested, His son Michael was beaten unconscious and left in the burning pub, but he survived.

A local factory which employed almost 200 people, Deeds and Templar Hosiers, was also burnt down and would take two-and-a-half years to rebuild.

Two local men, Seán Gibbons and Seamus Lawless, were arrested and taken to the local RIC barracks for questioning. They were viciously beaten and bayoneted to death over a period of hours, and their bodies were then dumped out on the street. The brutal nature of the murders caused widespread revulsion A plaque on Quay Street in Balbriggan commemorates both men.

This week, President Michael D. Higgins described the sack of Balbriggan as an “atrocity” and an “an act of collective punishment, a reprisal, a term that would become the mark of a policy aimed at subjugation, installation of fear in a public that had in its midst those that sought independence”.

“Such arson attacks punished the civilian population by destroying a cherished public utility or key employer in many communities,” he wrote, adding that “reprisal-based violence was a key element of the British military imperialist strategy in the Irish War of Independence.”

He said that British governments used reprisals as a tool of repression.

“There can be little doubt that collective punishments were already an established strategic tool of imperialist military strategy by the time they occurred in Ireland during the War of Independence. Their use is rooted in ideological assumptions, of superiority and inferiority in terms of race, culture or capacity, in the notion of the collective as a disloyal, hopeless or threatening version of the ‘Other’. The othering of particular cultures, particular nationalities, particular attributes and particular ideologies served as an insidious rationalisation of, and distorted logic behind, acts of violence such as collective punishments and reprisals. Standing behind this was a supportive intellectual tradition. Pejorative attitudes towards the Irish by the British are well-documented, and had been well-formed by this period.”

The sack of Balbriggan was one of many reprisals carried out in the War of Independence which left towns devastated by arson, looting and murder. Reprisals also terrorised the citizens of Tuam, Mallow, Trim, Trale, and Cork city amongst others.

In addition, it was claimed that a total of 48,474 raids by armed British forces took place on Irish homes in 1920.

The atrocities galvanised support for the rebels at home and abroad, and led some within the British military hierarchy to question the government’s strategy. Field Marshal Sir Henry Wilson said that he had cautioned Winston Churchill: “I warned him again that those Black and Tans who are committing very indiscriminate reprisals will play the devil in Ireland, but he won’t listen or agree.”

ON THIS DAY: 1 OCTOBER 1843: Monster Meeting hosted by Daniel O’Connell in Kildare