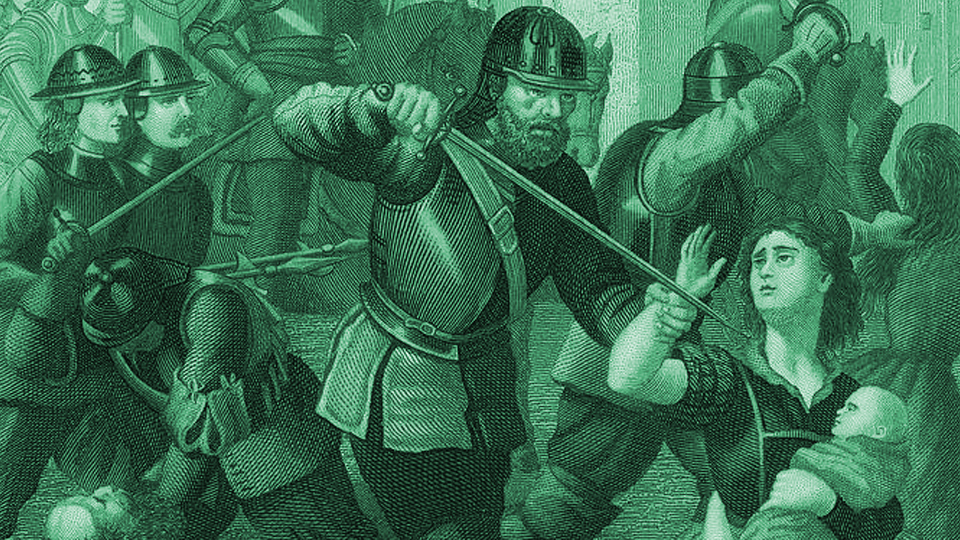 On the 10th of September, in 1649, Oliver Cromwell sat encamped outside the city of Drogheda with his 12,000-strong army and 11 siege cannons. They had already opened two large breaches in the town’s walls, as they were thin medieval structures and not designed to withstand cannon fire.

Poised to attack the city, Cromwell wrote a letter to the Royalist commander inside, Arthur Aston, calling on him and his forces to surrender, and making a thinly-veiled threat of bloodshed:

Sir, having brought the army of the Parliament of England before this place, to reduce it to obedience, to the end that the effusion of blood may be prevented, I thought fit to summon you to deliver the same into my hands to their use. If this be refused, you will have no cause to blame me. I expect your answer and remain your servant,

The rules of war at the time were clear: if one party refused to surrender, and then was defeated, they could be lawfully slaughtered by the victors.

Aston, however, refused to stand down. His garrison of 3,000 troops was comprised of both Irish Catholics and English Royalists alike, and they prepared to face Cromwell’s forces in battle. Though they were outnumbered 4 to 1, and running low on ammunition and gunpowder, they held out hope that a group of 4,000 of their fellow Royalists nearby at Tircroghan, Co. Westmeath, would come to their aid.

No such help came, however, and the following day, on Tuesday the 11th, Cromwell launched simultaneous assaults on the two breached segments of wall. Though many of his troops were killed in the assault, with subsequent waves climbing over “a heaped pile of their comrades’ corpses”, the defenders were ultimately defeated. Cromwell, enraged at his army’s losses, said “In the heat of the action, I forbade (my soldiers) to spare any that were in arms in the town…and, that night they put to the sword about two thousand men”. His troops began marching through the streets, looting buildings and sacking churches.

Aston and around 200 of his men had taken up defensive positions in Millmount Fort, but one of Cromwell’s colonels, Daniel Axtell, offered to spare their lives if they surrendered. However, Axtell later said as soon as they surrendered they were disarmed, taken to a nearby windmill and killed. Aston, in particular, was clubbed to death with his own wooden leg.  Any Catholic clergy, such as priests or friars, were beaten to death, and the heads of 16 defending officers were severed and placed on pikes outside Dublin as a warning to those leaving and entering the city.

One of Cromwell’s military chaplains named Hugh Peters estimated that between 700 and 800 civilians were killed in the siege. Irish Catholic sources at the time claimed that the figure was as many as 4,000, and denounced Cromwell’s actions as “unparalleled savagery and treachery beyond any slaughterhouse.”

Cromwell wrote following the battle: “I believe we put to the sword the whole number of the defendants. I do not think thirty of the whole number escaped with their lives. Those that did, are in safe custody for the Barbadoes” – referring to indentured servitude on the Caribbean island of Barbados.