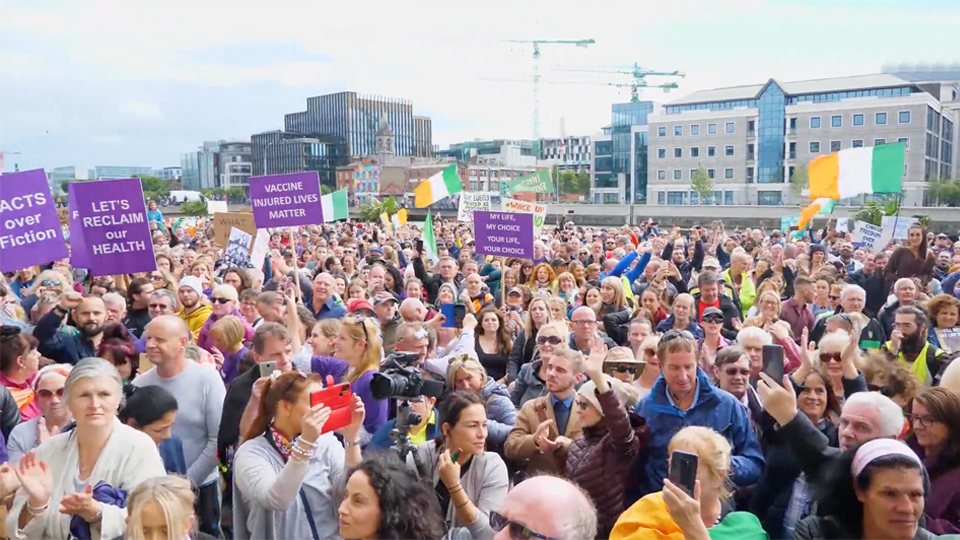 Last Saturday, thousands of people took part in a rally calling for many of the Covid-19 restrictions to be lifted, and arguing that mask-wearing and vaccinations should not be mandatory.

Whatever your feelings on the aims of the rally, it’s safe to say that the demonstration was much bigger than the media had expected it to be, and that a current of unease and upset about the continuation of the increasingly rudderless lockdown is being underestimated by the political establishment.

The blatant flouting of the supposedly crucially important lockdown rules by a 80-strong posse of the elites – including a judge, a Minister, the leas Cathaoirleach of the Senate and an EU Commissioner – at #Golfgate no doubt boosted the crowd and the feeling that the Covid rules don’t seem to apply to everyone.

How the media, and the establishment, decided to react to the size of the crowd was in sharp contrast to their coverage of the black lives matter protest which took place in June in Dublin and which attracted favourable tweets from then Taoiseach Leo Varadkar and tacit approval from almost every media platform.

Clearly, that approval did not extend to the public gathering on Saturday, but the media’s reporting on the anti-lockdown rally was damaging to their own credibility in three ways.

1. People could see they were untruthful about the size of the crowd

The media decided to underreport the size of the crowd by a factor of ten. RTÉ led the charge reporting that “hundreds” had attended the rally, and most of the national papers followed suit. The problem with this attempt to diminish public support by pretending it doesn’t exist, is that while it would have worked very ten years ago, every now has a smart phone and access to social media. Hundreds of videos, shot on phones and posted to Twitter and Facebook, showed that there were thousands of people in attendance.

Great turn out at the protest in Dublin 🇮🇪 pic.twitter.com/rINh934EeE

This video from Jim Corr already has a million views. It was easy for people to see that the media weren’t being truthful, and to believe the evidence of their own eyes. That leads people to wonder why the media misreported the numbers in the first place.

2. The speakers at the Rally weren’t interviewed, but they were attacked and their jobs targeted.

Normally when a large public event occurs it’s the job of news reporters to report the news: what was the rally about, who spoke, what did they say – and, often but not always, to look for an opposite view to balance the report.

That didn’t happen on Saturday.

Instead we read that there were clashes at a rally, that the event was being investigated by the Gardai for breaching covid restrictions, and, of course, there were lots of articles ratcheting up calls for barrister Úna McGurk to lose her job for speaking at the demonstration,

The media mostly confined itself to calling people at the rally ‘far-right’, while doses like the Movement for Asylum Seekers in Ireland described them as “white supremacists”, despite a notable lack of any evidence that this was, in fact, the case.

I wasn’t at the rally, and I don’t have an objection to wearing masks, but from the footage those attending seemed like a cross section of Irish society, including many who are deeply upset at how elderly people were left to die by the government’s mishandling of the Covid-19 crisis.

While many people might disagree with what speakers like Prof Dolores Cahill, Dr Marcus de Brún, and barrister Úna McGurk have to say, they are medically and legally qualified, and have a right to put forward a contrarian opinion. That’s the basis of a free society, and if editors feel the speakers at the rally are talking nonsense, then they should have them on the air to robustly debate the issues.

I’d not argue with the contention that terrible mistakes were made during the lockdown, and that the government doesn’t seem to have a plan going forward. That doesn’t mean I think the virus is a ‘scam’, or that people shouldn’t wear masks, but I do think this trend to describe everyone who disagrees with the establishment as ‘far right’ is ridiculous and is often just a cover for an attack on free speech. The media should have no part in supporting that.

3. Much of the reporting concentrated on ‘scuffles’ without saying the aggressors were those opposing the rally.

Most of the media’s coverage of the rally led with reports (and headlines) about ‘scuffles’ that had taken place. The reporting would lead to the casual reader assuming that there had been some sort of fistfight between those attending the rally and those protesting it, with the implication that both sides were equally to blame.

In fact, as the Gardai have now confirmed, it was the left-wing counter-protesters who had planned a “group attack” and who came “armed with sticks or batons” and wearing “black caps and scarves covering their faces, as well as PPE-type latex gloves”.

Ógra Shinn Féin claimed that their members had been party to the counter demonstration, but most of that crew was of course made up the violent left wing group Antifa, whose numbers have recently been bolstered by members of Saoradh, the group linked to the killing of the journalist Lyra McKee. Not much about that in the Irish media reports, amid all the scare-mongering about ‘far right’ rallies.

The media in Ireland, as in the rest of the world, is in serious trouble, and platforms like RTÉ are really only surviving because of massive funding from the taxpayer. Surveys have shown that trust in the media has fallen significantly, and the evident bias in reporting as evidenced in coverage of events like last Saturday’s only serves to further damage their own credibility.

The fall of Catherine Noone