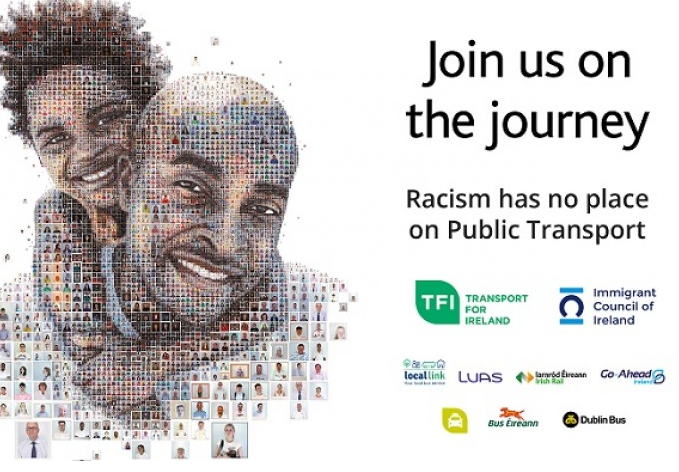 I asked this question on twitter, and I’ll ask it again here:

Is there any racist out there who will see this and think “oh goodness, I was totally wrong, and going forward I will not think anything racist again”? I have to say, I’m sceptical.

But then again, I suppose that’s not really the point here. The point is to get you, the public transport using public, to stand up to any racist abuse when you see it.

The campaign will feature 2,400 posters, according to the organisers, and will run for a whole week. After which time, presumably, Ireland will be significantly less racist.

“Hundreds of selfies donated by passengers have been amalgamated to create a large montage representing diversity on the Transport for Ireland (TFI) public transport network.

From Tuesday 13th August to Thursday 15th August, commuters at Heuston Station are being invited to show their solidarity and take a stand against racism by donating a selfie to feature in the campaign and sharing on social media.”

Look, tackling racist abuse is a worthy cause. Whatever your views on immigration, or any other policy for that matter, it’s just not okay to not like someone, or to have a go at them, because of the colour of their skin or where they’re originally from or anything else that they have no control over. In fact, you’ll do better in life if you’re just polite to people in general. Most of us instinctively know this and don’t need the Immigrant Council or Dublin Bus to remind us.

What’s funny here though is that this campaign is being presented as something new and fresh – with the collages, the “join us on a journey” slogan, and the 2,400 posters.

But isn’t it just the exact same campaign they ran at the exact same time last year? Look at this report in the Irish Independent from August 2018. Same collage. Same slogan. Almost the same number of posters. In fact, the article is almost identical in every way to today’s announcement.

I suppose it’s just one of those stories we get, and forget about, every single year. We all see the posters, feel a bit better about the country for being tolerant and inclusive, and nothing much changes. It’s just another way to spend the public’s cash, and an easy bit of content for the newspapers on a slow news day.