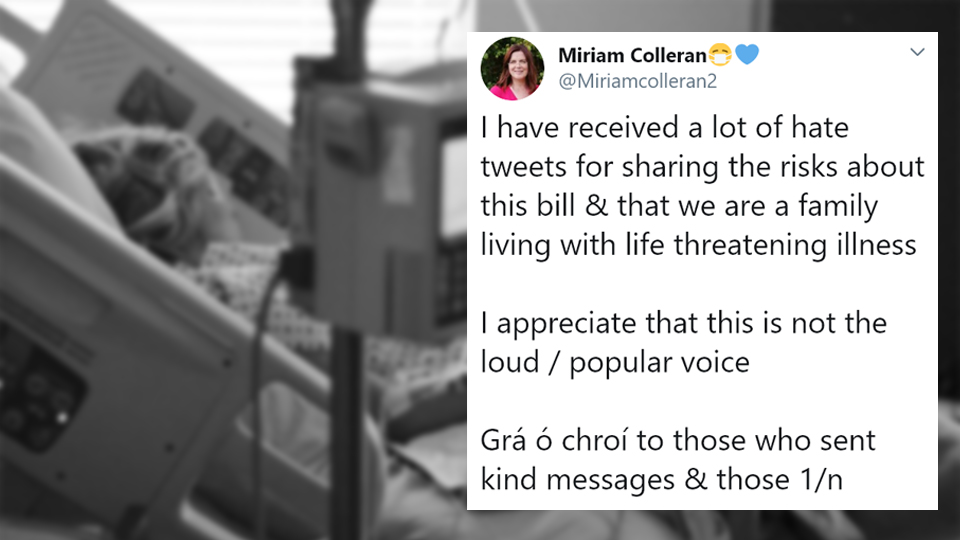 A mother of a child with a life-threatening illness says she has received “a lot of hate tweets” after speaking out with concern about the assisted suicide bill.

Miriam Colleran, a doctor who works in palliative care,  posted previously that “as the mother of a daughter with a life threatening illness,” she was “very sad to see the assisted suicide/dying & euthanasia bill pass this second stage.”

She explained that as a doctor working in palliative care she knew a lot can be done to alleviate symptoms and manage distress at end of life for most people.

She called for a “proper discussion” of the issues, and said that Ireland needed to look at what had happened in jurisdictions where assisted suicide was already legal.

Now she says she has received a “lot of hate tweets” for expressing her opinion.

“I have received a lot of hate tweets for sharing the risks about this bill & that we are a family living with life threatening illness,” she wrote. “I appreciate that this is not the loud / popular voice.”

I appreciate that this is not the loud / popular voice

Last week, a terminally ill man was described as a “f**ker” for objecting to the Bill.

You are a stupid insensitive fuc#ker.

But Ms. Colleran also sent a big thank you to those who had sent support when she was under fire.

“Grá ó chroí to those who sent kind messages,” she wrote.

Your posts have given a much needed perspective to this debate.
The hate mail will continue and it will come from those with closed minds and an inherent anger inside ,but it will never diminish your valuable and appreciated clarity of thought , integrity and courage . Thank you

It's unfortunate that there can't be a respectful debate on this. It is very complex and not something to be rushed through. Thank you for sharing your experience. It's important that all voices are heard but I think your experience shows that this may be difficult ♥️