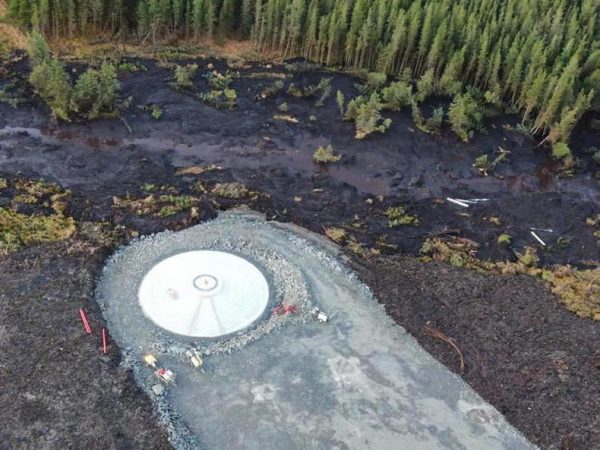 Donegal residents living near the scene of a major peat landslide have expressed disappointment that another windmill development is being planned in the area.

A major peat landslide reportedly caused by the ongoing development of a wind farm near Ballybofey, Co. Donegal has resulted in significant pollution extending into two Co. Tyrone rivers, with residents raising the alarm that another proposed wind farm near the area must be denied planning permission.

Local residents have said they are devastated by the damage, with one person telling Gript.ie that there are “no excuses” for allowing the other nearby windfarm to proceed.

“We received a letter about the new wind farm just one day before the landslide, and I can tell you that no one wants any of this to happen again,” she said.

It is thought that uprooting trees, digging down for roads in wet weather and pouring large amounts of concrete in preparation for the wind turbines all combined to cause the peat slippage last Friday at Meenbog, Ballybofey. Work on the site, which is to power an Amazon data centre, has been suspended.

Sludge however continues to pollute the Mourne Beg and Derg rivers, where salmon spawn and eventually make their way to the River Foyle before passing through Derry.

The Ulster Angling Federation has said it expects the Mourne Beg river will have a “complete fish kill”, whilst the Derg is black in colour and being monitored by members who are waiting for the water to clear in order to count the dead fish.

Invis Energy, the company constructing the windfarm at the site of the peat slippage, has claimed there is “no risk to public health.” The other proposed wind farm only a few miles away is being planned by Enerco Energy.

Donegal TD Thomas Pringle told the Dáil on Wednesday that there should be a comprehensive review of wind farm regulations following the landslide.

“The potential for a disaster such as this has been well flagged by campaigners, due to the inadequacy of the governance of the industry. A narrow review was started by the Fine Gael/Labour government in 2013 but it still hasn’t concluded,” he said.

Taoiseach Micheál Martin said he was aware of the incident and wanted to finalise guidelines for future wind farms, whilst Sinn Féin’s Pearse Doherty called for all works at the site of the windfarm to stop until a full investigation was completed.

The Environmental Protection Agency has said they will meet with all those investigating the landslide to co-ordinate any further action.