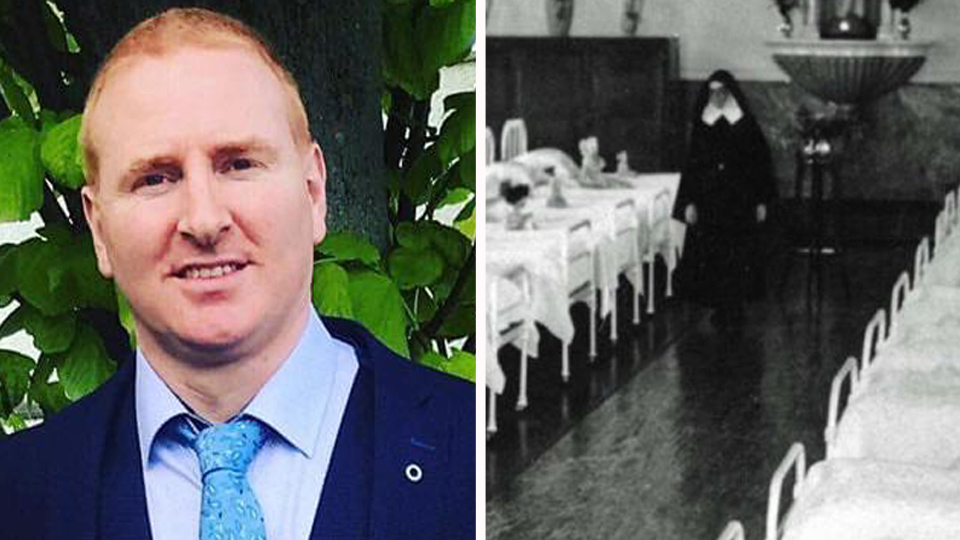 Graham Doyle was handed over to the Sisters of Charity as a baby, but the adoptee says one day modern Ireland will also have to face up to its own treatment of babies.

Doyle, now in his 40s, never had the privilege of meeting his birth mother, a Co. Kilkenny woman who lived near the banks of the River Nore. She had passed away before he approached the adoption agency as an 18-year-old trying to find his biological parents.

He did get to meet her family however, and takes solace in the fact he can keep in touch with them. They are a cherished link to his own past, a window through which he can know and hold onto the bond he still feels with the woman who gave him life.

There was greater success however in finding his biological father. Doyle, from Artane, has recently connected with him through DNA testing and Ancestry Online, in a breakthrough made just before Christmas.

He has already met his half-brother because of the connection, and plans on meeting his biological father and half-sisters very soon, something that brings a beaming smile to his face.

As a newborn, Graham was brought to St. Patrick’s Infant Hospital in Blackrock, an institution run by the Sisters of Charity that acted less as a hospital and more as a home for the babies of unmarried mothers that were to be adopted.

When his mother brought him there a week after his birth, it would be the last time she held him, something he knows much have been hugely painful for her.

“I can only imagine how immensely difficult that was for my biological mother,” he explains.

“She was 20 at the time, and I heard she was never the same after that and that she always thought about me and talked about me to her older sister.”

Doyle is full of praise for the Sisters of Charity who looked after him, insisting his research shows he and other babies at St. Patrick’s got the very best of treatment, clothing and food that was possible at the time.

“I’m eternally grateful for the great care I received there before I was adopted. It’s known that the Sisters of Mercy nuns in Temple Hill made sure that the babies there had the best of everything.”

“They gave us good food and had a constant supply of new clothes for the babies. When my parents collected me I had new clothes on. The facilities at Temple Hill were excellent. I was born with clicky hips and during the month that I stayed at Temple Hill I was brought out to Cappagh Hospital for an X-ray and then when I was returned to Temple Hill I had constant physiotherapy done on my hips to make them right.”

The father of three says he is not very religious, but that “the good the Catholic Church did for people is constantly overlooked today.”

His views are more nuanced, he says, than those commentators who paint the history of institutional homes as being black and white.

“There are many people who suffered at the hands of the Catholic Church when they were in their care and those people need to be listened to, respected, acknowledged and compensated properly. But the kind of coverage it is given by RTÉ and Newstalk is the usual anti-Catholic rhetoric that is unfortunately expected from most Irish media sources nowadays.”

Major question marks remain about how the Sisters of Charity handled adoption records, with evidence indicating babies were swapped and the identities of their biological parents omitted on certain occasions, but, by his own admission, Doyle says he was blessed to be adopted by a wonderful couple, “the best mam and dad that anyone could ever have.”

“My mam and dad then adopted my brother Keith when I was 4. I describe my upbringing in Artane as magical memories that I cherish forever. Sadly my mam and dad are not with us anymore. My mam was tragically killed in a road accident when I was just 12 and my dad died of sarcoma cancer a year and a half ago.”

His thoughts on modern Ireland are a little less positive, making clear his view that we have even bigger skeletons in our closet than our ancestors.

“The way we treat unwanted babies today is so cruel. We just snuff out their lives before birth, not even giving them a grave, and it’s often the same media figures who campaigned for abortion that tell us how cruel the old Ireland was.”

“I’m well aware that, if it were today, I would have been a perfect candidate for abortion during my mother’s crisis pregnancy, in the eyes of those campaigners and journalists.”

“Modern Ireland is an even crueler place because the state will just pay a doctor to kill the babies that are unwanted.”

Although such opinions don’t have a home among today’s chattering classes, perhaps as an adoptee he has a greater appreciation for life than those who didn’t experience that longing for their parents, their history and their identity which he inevitably felt.

His perspective mightn’t have been uniformly experienced back then, but there is much to mull over in the reflections of someone who has tasted two sides of Ireland’s recent past.