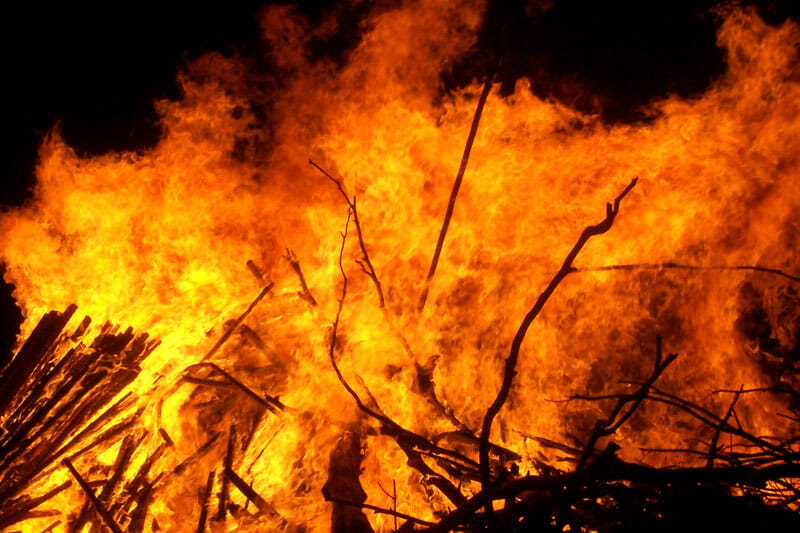 And just like that, politicians were outraged, upset and angry about the forest fires in Brazil and surrounding countries.

It’s heartening that rabid deforestation, and in this case, slash and burn is making news and causing politicians to feign interest- for a few days at least until something else comes along. With the world watching, UK Prime Minister Boris Johnson called the fires “not only heartbreaking” but “an international crisis”.

‘Our house is on Fire,’ Macron said, German Chancellor Angela Merkel has called the fire an “acute emergency, while Donald Trump offered to ‘help out.’

Leo Varadkar said Ireland will not vote for the EU-Mercosur Free Trade Agreement if Brazil does not honour its environmental commitments.He said that the Mercosur deal is two years away from a vote on approval in Europe and that during this time Brazil’s environmental actions will be monitored “closely”.

‘Closely?” We get encouraged to live more sustainably, but whats the point in buying electric cars, when the Amazon is being burnt to a crisp to facilitate a beef industry in Europe?

If you really cared about the Amazon, why was the deal agreed in the first place? The Mercosur free-trade deal paves the way for a significant increase of imports of cheaper beef and other goods from South America. The EU’s beef consumption is directly responsible for the cutting down of the Amazon.

The hypocrisy is sickening.

In 1989, Time magazine featured a photo of the burning Amazon on its front page, stating . “The burning of the Amazon could have dramatic effects on global weather patterns—for example, heightening the warming trend that may result from the greenhouse effect … the Amazon region stores at least 75 billion tons of carbon in its trees, which when burned spew carbon dioxide into the atmosphere.”

“No one knows just what impact the buildup of CO2 will have, but some scientists fear that the globe will begin to warm up, bringing on wrenching climate changes.”

Since then, damn all has been done to stop deforestation within Brazil and outside of it. We need a policy of zero deforestation if the Amazon is to survive, and yet people have invested more time on line about whether the photos used of a burning forest are real as conspiracy theories abound.

The fires have been raging for three weeks, and notably deforestation and ubiquitous corruption isn’t new in Brazil.

Disastrous former Brazilian president, Lula engaged in and enabled corruption, ransacking the Brazilian economy and allowing violent crime to grow. His legacy leaves a lot to be desired, then Bolsanaro comes along and puts the nail in the coffin. Our leaders should be appalled – for eternity, not just this week.

Burning down the house

The fires are burning at the highest rate since the National Institute for Space Research began tracking them in 2013.

Dramatic images and videos on social media show giant plumes of smoke rising from the greenery, indigenous tribes being made homeless and black rain falling on Sao Paolo, which had been blanketed by smoke and ash.

Humanity needs this like a hole in the head.

The Amazon is often referred to as the planet’s lungs, producing 20 percent of the oxygen in the Earth’s atmosphere.

72,843 fires raged in Brazil in total this year, with more than half in the Amazon region. An 80 percent increase on last year. It couldn’t be any worse. You don’t have to be a treehugger to be offended and scared by this. It affects everyone.

Our lungs are on fire

“Our lungs are on fire.” Irish agroforester Paul Soden, who owns the Green Man farm, two hours outside Rio de Janeiro informed me. “Literally. People are coughing and complaining of sore eyes, hundreds of kilometers from the fires.”

Like the wildfires that plague California, most are started by humans, but then spiral out of control.

He explains that In Brazil every year during the latter stages of winter many farmers burn their pasture in anticipation of the coming rains, many of whom want to use it for agriculture, soy beans and cattle farming as its more lucrative in the short term than a piece of dense forest. “Even though it is illegal to do so, politicians rarely lift a finger to do anything about it because in general they are more interested in retaining the support of those same farmers come election time than tackling the issue,” he says.

“Brazil is a huge country and difficult to manage at the best of times. Couple that with corruption and we have the perfect storm.”

Since Bolsonaro took office, there has been the withdrawal of protection for independent tribes throughout the Amazon, an exponential increase in illegal and legal logging, mining and farming and violence against communities living there, Soden adds.

A point of no return

Even though it’s a long way from the sea, the key mechanism that keeps the Amazon and rainforests in South America moist, is the evaporation. It’s like a water pump. Rain falls, gets absorbed by trees, then they transpire. When you fell or burn trees, it stops this process.

“It’s difficult to know when a tipping point will occur,” president of the European Agroforestry Federation, Patrick Worms who is based in Brussels says. The Amazon is considered vital in slowing global warming, whatever about the uncountable species of fauna and flora, and the native people who are being displaced.

“But when it does it will happen quickly. There used to be lakes and forests on the Sahara. Now it’s the driest place on earth.”

What we’re facing is that 1.5 billion people will be displaced. 500,000 people will starve. Less than a third of the species on the planet will become extinct.

So what can we do?

Well we can sit there and do nothing. Or we can take the piss out of Greta Thunberg.

Flying less and getting the train once in a while isn’t going to cut it, Worms insists.

“Ultimately if you want to live a more sustainable life, that’s great. Don’t use straws, or plastic cups, and fly less, but if it stops you from doing something more meaningful, it has the opposite effect,” he says.

“Share the information about the forest fires on social media. It helps, but get in contact with your government if you really want to make a change. Then encourage other people to do the same.”

This means getting out pen and paper and putting aside five minutes for our planet. “Governments react to voter pressure, so email your government. If you really care. Everything else, is a waste of time.”

Its all about money after all. “There is a lack of urgency about how media reacts to stories such as this one,” Worms says. It’s as though they’re fatigued with the amount of man made destruction occurring.

Things like Brexit, cat fights between left and right, offence culture, gender wars and identity politics seem to get more headlines, but who cares? They are so unimportant compared to this. “Even a nuclear attack would be a dent compared to what’s happening right now with climate change,” Worms warns.

The only thing that will work is if demand decreases. Collectively not eating beef will also help.

Rather than twiddle our thumbs, send an email

In reaction to the fires that are burning in the Amazon, and our governments care little, I have just sent this email to [email protected]

As most individual actions are pointless and time consuming, pressure on governments is the only thing that has proven to work. Feel free to copy and paste and send to relevant leaders. A list of European leaders who will need to be reminded next week exists below.

(byline in subject matter – Concerned citizen call to BAN ALL AGRICULTURAL IMPORTS FROM BRAZIL and vote AGAINST THE EU-Mercosur Free Trade Agreement.

As a concerned citizen I am contacting you in relation to the burning of the Amazon rainforest and believe we need to react immediately in the interest of our planet and people.

The fires are burning at the highest rate since the National Institute for Space Research began tracking them in 2013. 72,843 man made fires have burnt in Brazil in total this year -an 80 percent increase on last year. The Amazon is often referred to as the planet’s lungs, producing 20 percent of the oxygen in the Earth’s atmosphere.

Uncountable species of fauna and flora will be lost, native people are being displaced and if left go on, the fires coupled with rampant deforestation will have cataclysmic effects and could turn the South American continent into a desert. So out of fear and humanity, I call upon you and the Irish government to BAN ALL AGRICULTURAL IMPORTS FROM BRAZIL until this issue is addressed and vote AGAINST THE EU-MERCOSUR FREE TRADE AGREEMENT.

It may not seem like much, but if we mobilise people, it will be effective. Like, share and post. Use your social justice warrior status for good use and at least try to save the world. The alternative doesn’t bare thinking about. We need to forest, but right now, it needs us.