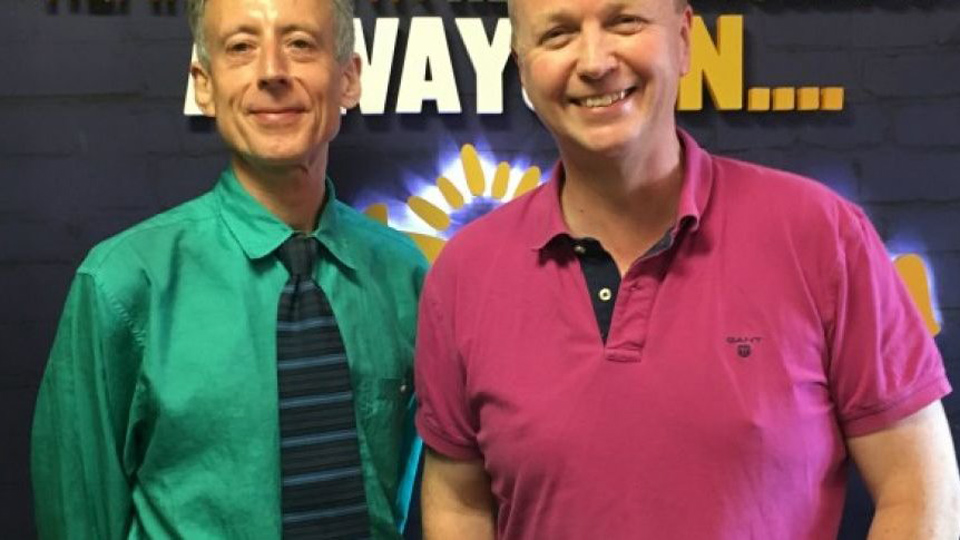 Today FM presenter Matt Cooper has come under fire for his softball interview with controversial activist Peter Tatchell, whose comments on paedophila and sex with children have come under the spotlight again after photos of the campaigner emerged with the Minister for Children and other people of influence in Irish society.

Cooper opened the sympathetic segment on The Last Word by relaying the statement of the Minister who accused those concerned about his association with Tatchell of being ‘far-right’ and motivated by homophobia, before introducing Tatchell as a LGBT campaigner who had previously been a guest on the programme.

The presenter asked Tatchell to outline his views on paedophila, and Tatchell replied that he categorically condemned child sex abuse, and condemned adults having sex with children  saying “that is my view now and it has always been my view.”

In 1997, Tatchell wrote a letter to the Guardian newspaper defending a book called ‘Dares To Speak’ which, in Tatchell’s words, “challenges the assumption that all sex involving children and adults is abusive.”

He described the book as “courageous”, and added:

“The positive nature of some child–adult sexual relationships is not confined to non-Western cultures. Several of my friends – gay and straight, male and female – had sex with adults from the ages of nine to 13. None feel they were abused. All say it was their conscious choice and gave them great joy.”

“While it may be impossible to condone paedophilia, it is time society acknowledged the truth that not all sex involving children is unwanted, abusive and harmful,” Tatchell added.

Matt Cooper directed one careful question to Tatchell about the letter. “How come that people have been able to misrepresent [your view] based on a letter that you wrote to the Guardian newspaper back in 1997?” he asked.

Tatchell responded saying; “That letter was edited, but even so, it still said, and I quote, paedophilia is impossible to condone – that means I don’t condone it and I condemn it.”

No other questions were asked by Cooper about the obvious contradictions in the letter and Tatchell’s claim that adults having sex with nine year olds could give the child ‘great joy’ – fact, just 40 seconds of an 11 minute segment of The Last Word focused on the disturbing letter which had led to decades of controversy.  Cooper later confirmed on Twitter that he had read the Guardian piece.

Tatchell has never sued the Guardian for ‘editing’ the letter’. He has also campaigned to lower the age of consent.

The Today FM interview met with an instant backlash response on social media.

The interview was “just teed .. up to downplay controversy and smear people,” wrote Robert Burke.

Matt Cooper is one of the most influential journalists in Ireland. I’d encourage everyone to listen to the interview below and see what passes for journalism in Ireland. Didn’t even bother reading the letter from Tachell, just teed him up to downplay controversy and smear people. https://t.co/ebIv8kExou pic.twitter.com/XhJXHky460

It was described as a “whitewash” by one commentator: “I’d say Prince Andrew would love a handy interview like that. Ask him a single question about his infamous photo with virgina Roberts. Let him give the answer you want and then move on to how it’s purely republicans/anarchists out to get him.. very disappointing #whitewash.”

I'd say Prince Andrew would love a handy interview like that. Ask him a single question about his infamous photo with virgina Roberts. Let him give the answer you want and then move on to how its purely republicans/anarchists out to get him.. very disappointing #whitewash

“This shameful interview illustrates how we need some real objective journalism in Ireland more than ever,” said Brian Ward.

This shameful interview illustrates how we need some real objective journalism in Ireland more than ever.

One listener who said they normally loved the programme described the interview as “stomach-churning”.

I love listening to @cooper_m . I have no time for the far right looney. Have no issue with a man being minister for children who is also gay….
But that interview was stomach churning. I'm sorry. Big fan normally. Gone now.

Another said it was “awful journalism” just “circling the waggons”.

It was awful journalism, just people in influence circling the wagons of support.

Some commentators described it as a “PR exercise” with “no serious questions asked” and an “easy interview” with an “agreed format” – and that Tatchell’s own words in the letter to the Guardian remained undisputed.

@cooper_m
What an easy interview. Basically it was an agreed format. Matt would ask a question which would gentle lead Peter Tatchell onto his reply, and then Matt Cooper would sum up PTs response.

Who am I homophobic against Matt?
Is child protection 'right-wing' these days?

Of course he's going to back track but his letter to the Guardian is undisputed. Where is the unedited version if he claims bits were left out? Has it been obtained from the Guardian? He also claimed elsewhere it was valid for a 9 year old to say they enjoyed sex. That's abuse!

One mum pointed to a recent video where Tatchell said that, while most sex with young people was wrong, if children who were sexually abused looked back on the experience and said they consented to it and were not harmed by it, their view should not be dismissed.

In 2019 Tatchell was still pushing the notion that a child of 9 can "consent" to sex with an adult and we should be just fine with that, if, as an adult, the ABUSED (my term) child considers it to have been a +ve experience.
Was @cooper_m aware of this when he had T on @lstwrd? https://t.co/36KglJuITi

Others posted videos of Tatchell’s campaign to make it almost impossible for parents to keep their children out of explicit sex-edcuation classes.

#GreenParty activist & paedophilia apologist #PeterTatchell, who the new #MinisterforChildren #RodericOGorman describes as “legendary”, brags about devious tactics designed to make it difficult for parents to opt their kids out of radical sex ed classes he wants in schools pic.twitter.com/6SslqaN68A

While many questioned why Tatchell was involved in any campaign relating to children or to sex-education for schools, given his comments on child abuse.

There is no homophobia involved in criticism of @RodericOGormantd but grave concern at his association with @PeterTatchell and what that man stands for. Furthermore, parents are concerned at any involvement by Tatchell with sex education of THEIR children in Irish schools.

Matt Cooper, who responded to the concerns expressed on social media with by saying his interview had driven people to “near derangement”.

Who can blame Dara Murphy? Being a TD is a terrible job