Mary McAleese should apologise for slur on John Paul II 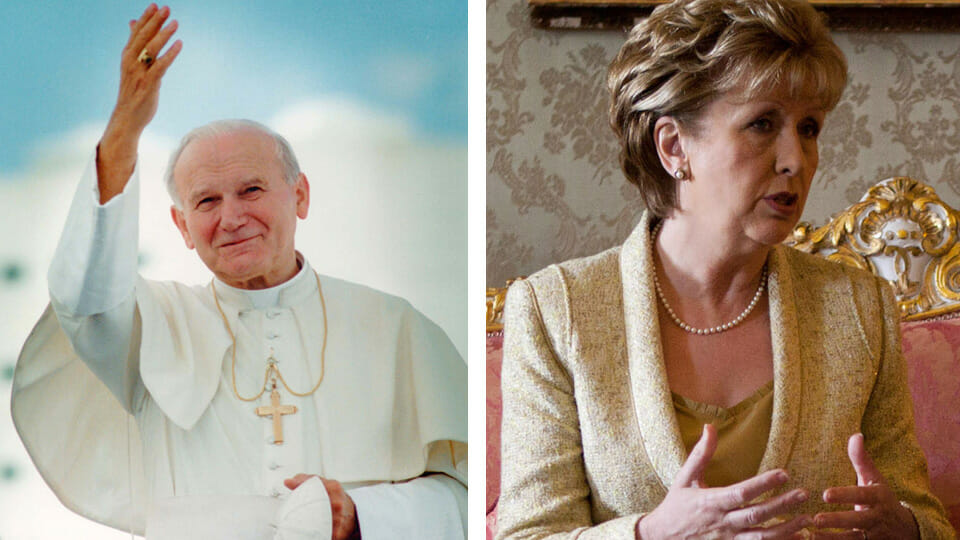 Mary McAleese in her contribution to a Trinity College conference entitled ‘Women the Vatican Couldn’t Silence’ read from a book by Pope John Paul II, ‘Love and Responsibility’. The book was written by the late Pope in 1960, and was a lengthy treatise on the nature of spousal love that focused on mutual self-giving, consideration and sensitivity . It proved to be one of the big teaching themes of his papacy which he would go on to develop in his homilies and future writings under the title,’Theology of the Body,’

The quotation she selected stated: ‘ for the performance of the sexual act, it is enough for a woman to be passive and receptive’. It can even take place while ‘she is asleep or unconscious’. Mary McAleese follows the quotation by saying,’ that is how we are treated by our Church.’ The Church wants women who are passive, receptive and of course silent. But she did not leave it at that. She went on to recall how the late moral theologian, Fr Sean Fagan, ‘called out’ John Paul on on those words. ‘Can this really be the Catholic Church’s teaching ?’ he asked, ‘It sounds like rape’.  We do not have a reference for Fr Fagan’s comment or where he made the remark attributed to him. However, according to McAleese, it was for such ‘calling  out’ of misogyny he was silenced while John Paul was canonized’. ‘That’s our Church,’ she quipped.

Not surprisingly, the conference responded with gasps of shock and horror. Moderator Ursula Halligan uttered the word ‘shocking’. No one thought to challenge this most unlikely take on John Paul II’s views on marriage.  One might have expected someone to ask for the context of the quotation, what did he say before and after? No one at the event which was hosted by the lay Catholic organization, ‘We are Church’, thought it appropriate to say or ask anything. Perhaps they did not know how divergent his views really were from those McAleese imputed to him?

The words of John Paul quoted by McAleese describe an ethics-free understanding of sex based on biology and physiology, the precise opposite of the understanding he was advocating in the book. That understanding is based on ‘a reciprocal relation of persons, not merely bodies’. He sets out his view of human sexuality immediately after rejecting the reductionist view the McAleese quote describes.  ‘A man’, he says, ‘ should be aware that ‘ the curve of sexual arousal in a woman differs from that of a man. It rises more slowly and subsides more slowly’. He should be aware ‘ not because of hedonistic but because of altruistic motives’.  He writes that  ‘a rhythm should be sought and found by both spouses so that the climax of  sexual arousal takes place in both a man and a woman and that it occurs, in as much as possible, at the same time.’

That doesn’t sound like anyone’s notion of misogyny.  In fact it sounds very enlightened and modern. John Paul developed a holistic understanding of sexual relations of which the above is just one expression. Because he continued to write and preach on the subject throughout his long pontificate it is very difficult to understand how any informed Catholic could believe he would condone rape or any form of sexual exploitation.

However, the point to be emphasized is that he made the above comments side by side with the words quoted by McAleese. Not in a different book from a different time.  Not just in the same book but on the same page.  It is beyond comprehension that Mary McAleese could misread him in this way. It is frankly beyond belief that a moral theologian like Fr. Sean Fagan could do so. If he did really make the comment attributed to him he deserved to be silenced.

Pope John Paul II was canonized for the holiness of his life and the strong and fearless witness of his long pontificate. Calls for his canonization were first heard from the congregation at his funeral Mass in St Peter’s Square in 2005. That Mass was also attended by heads of state from some 120 countries around the globe. Over 200 countries sought to send delegations. The US delegation consisted of its current president, George W. Bush, and two former presidents. Former President Gérard Ford at 91 was too frail to travel. A sour note was struck when it was disclosed that former president, Jimmy Carter, who had been the incumbent when John Paul visited the White House in 2000, was passed over for Secretary of State, Condoleezza Rice, on the American delegation.  The devout southern baptist was disappointed not to attend the obsequies of the head of the Catholic Church.

Many others attending that momentous ceremony were of no faith. They didn’t come because of John Paul”s sanctity but because of his immense and defining contribution to the peaceful  liberation of people in his native Poland and the dismantling of communism across that part of the globe previously hidden by the Iron Curtain. His efforts came close to costing him his life.

In the words of the last and reforming communist era leader of Russia, Mikhail Gorbachev, John Paul II was ‘ an extraordinary man who did a lot to prepare for the end of the Cold War’. He was an epochal figure, an intellectual and spiritual Colossus of our time and of the faith he served at such personal cost during a long life and pontificate.. He deserves better than to be taken down and traduced by false, self-serving comments and mischaracterization.

The provost of Trinity College, Patrick Prendergast, needs to address this extraordinary abuse of the public platform the college provided  to Mary McAleese and ”We are Church’ for this event.  If he cares for its reputation as a defender of both natural and academic justice he must take appropriate action.