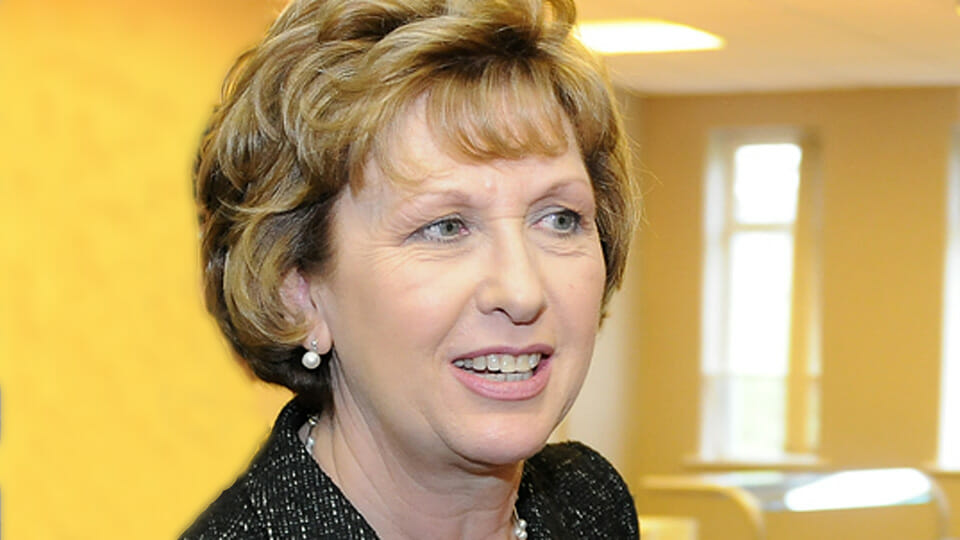 Speaking during a discussion as part of the Jonathan Swift Festival at St. Patrick’s Cathedral last Saturday, former President Mary McAleese told the Irish people that they had no right to be questioning the rapidly changing demographics of our society.

Celebrating this, McAleese declared that “today, 17 per cent of our population comes from somewhere else. The last time that happened was probably the Plantation [of Ulster]. But this has been a different kind of absorption, and I think in general we have done a really, really wonderful job.”

Any problems there might be, are of course attributable to the natives. Everyone else is welcome to come here, and any questioning as to whether all of this is positive is of course racist.

That she should mention the Ulster Plantation is interesting, and indicates that she is well aware that large scale shifts in population over a short period are seldom beneficial to those who were in the planted place before. The previous plantations certainly were not, and we are still dealing with their legacy. Why ought the current situation not also have radical implications?

Those implications will not necessarily be violent or malign, but to pretend that they will not have a profound impact on Irish society and culture is to be either naïve or dishonest. Indeed, it is not that long past that anyone who suggested that the non Irish segment of the population of the southern state would be close to 20% was accused of being an hysterical fear-monger. Under Project 2040 that proportion will expand towards one third.

Large scale movements of people are seldom voluntary. The current mass migration into western Europe and into the United States is driven by the desire on the part of the migrants to improve their own lives, but this would never have happened without the imperative of capital to have access to low-cost labour.

Significantly, other EU states are becoming much less enthusiastic in the face of domestic opposition and are even resisting the demands of race to the bottom neo-liberalism. In Ireland we remain the slowest boys and girls in the class. Heedless of growing disquiet, access to labour and more rack-rented tenants remains the sole driver behind Project 2040.

What is more, there has been nothing like the same public debate as in other states, especially when it comes to considering the importation of large numbers who may become a net burden on existing resources as they have a poor record of economic integration.

People like Peadar Toibín who refer to the need for sustainable immigration are “called out”, while the likes of failed soccer manager Brian Kerr are lauded for infantile statements that Ireland is “too white.”  So is Lagos “too black?” Stick to the wendyball Brian.

The last major population movements within Europe took place in the aftermath of World War II and were largely centred on eastern and central Europe where the allied powers sought to move large numbers of people as a means to avert the type of ethnic conflicts and revanchist nationalism that had been a contributory factor in both the 1914 – 18 and the 1939 – 45 conflicts.

Stalin was given carte blanche to launch what was in effect ethnic cleansing in the Soviet Union, amounting to genocide against the Crimean Tatars whose population had already been reduced by a third by 1933, and the entire population being murdered or deported to virtual death camps in 1944. Other national groups like the Chechens and Ukrainians suffered a similar fate, if not on the same scale, and Stalin was planning to decimate the Jewish population at the time of his death.

The Potsdam agreement of July 1945 underpinned the traumatic demographic upheavals. Of Potsdam, historian Anne Applebaum wrote: “A later generation of European leaders would react with horror at the notion of ‘ethnic cleansing.’ But Stalin, Truman and Attlee positively encouraged the mass transfer of populations.”

Is the mass transfer of populations now also being encouraged by some European leaders, restrained solely by the resistance of the peoples of Europe as increasingly expressed in the ballot box?

While millions of Poles and Ukrainians were transported, many of them to Stalin’s camps rather than to a new home, the real object of the exercise was to remove millions of people of German ethnicity to the west from Poland, Czechoslovakia and Hungary. Of course many Germans moved voluntarily to escape the vengeance of local populations, but more so the advancing Red Army which was responsible for the rape of up to two million German women and children over several years. The Yugoslav Communist Milovan said that when Stalin was informed of the atrocities he replied: “We lecture our soldiers too much; let them have some initiative.”

When socialism collapsed after 1989, some of the old conflicts re-emerged just like the “dreary steeples of Fermanagh and Tyrone,” the enduring legacy of the attempt to liquidate the Gaels of Ulster. The ethnic tensions led to in some cases to armed conflict, most notably in the former Yugoslavia where naïfs had assured the world that it was “self management socialism” – itself an absurd oxymoron – rather than a brutal police state that fostered peace and goodwill between the constituent parts of Tito’s state.

A Latvian woman once told me that we Irish had mostly evaded the horrors of the past hundred years. She was aware of course of what had happened here, but it does really pale in comparison. Three of her grandparents disappeared into the killing fields of the 1930s and 40s; two to the camps in the east, one to west as a prisoner of the Nazis.

She is an actual Latvian. From the time of the Stalin Hitler Pact until the mid 1950s the Latvian population was reduced to 60% of those living in the so-called Latvian Socialist Republic. The rest were Russian colonists who came with the NKVD and red carpetbaggers and stole the homes and the jobs of the Latvians who were murdered and sent to the gulag. This still causes tensions although the proportion of the population describing themselves as Russian has fallen to 25%.

She, obviously, has moved here, and is a valuable member of society, as most people who come here are. History proves, however, that there is a considerable difference between a rational intake of genuine immigrants and the headless chicken approach that dictates policy here.

For every scheme to destroy a nation’s sense of being in the interests of a quick buck, there are the useful idiots who will justify it in the name of diversity and the workers being united and all that nonsense.