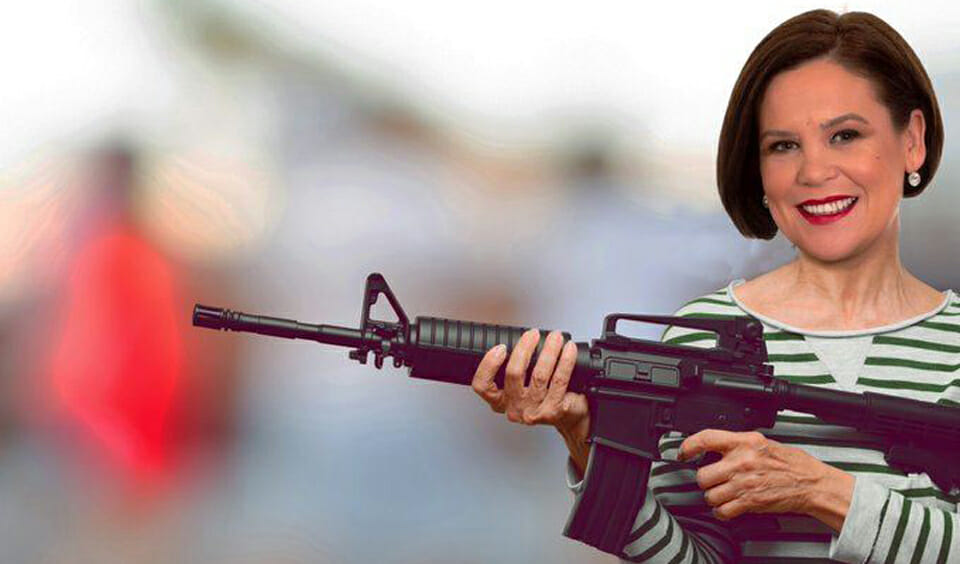 There are probably two things one might say about Mary Lou McDonald’s claim to the Sunday Independent that given the chance, she’d have been in the IRA, armed to the teeth and taking potshots at lads from Bolton who were unlucky enough to get posted to Northern Ireland. If you’re the anti-SF type, there’s the relatively predictable disgust at the idea of a potential Taoiseach retroactively endorsing the cold-blooded murder of children. More on that in a moment.

But more importantly, our collective reaction should be a simple come off it.

Mary Lou is 51 years of age. She was 18 years old in 1987. She was eligible for more than a decade of active service before the IRA’s unilateral surrender in 1997. The IRA carried out 47 terrorist attacks on the British mainland in 1992 alone. And where was Mary Lou when the brave soldiers of the revolution were over in the UK, carrying out military operations against shopping centres and the like? At home in her bed, is where she was, sleeping soundly.

Here’s her exchange with Hugh O’Connell on the subject:

HOC: You must have thought about it (joining the IRA), in all the years since then?

MLMcD: Not hugely – you live the life that you live.

HOC: I am putting it to you now. What do you think?

MLMcD: Yeah, I think there’d be every chance, every possibility. I grew up in Dublin so the Troubles and the conflict were the background noise of my generation.

When we were growing up, we were at a distance from it in one sense […] but it was the framing narrative of news broadcasts, night in, night out, the political debate. So growing up in Belfast, growing up in Derry, growing up in Tyrone – they weren’t at a distance, they were right in the middle of the conflict. But you can only live the life that you have lived and I don’t think you can second guess yourself on what you might and what you might not have done. What doesn’t change is the politics that I have and my beliefs in terms of Irish freedom.

It’s a good question from O’Connell, but it slightly misses the mark. The real question for McDonald isn’t “did you think of joining the IRA”, it’s “why didn’t you join the IRA”?

She asserts, obviously, that the “armed struggle” was just and righteous, which poses the obvious question of why she, as an able-bodied patriot, didn’t join it. The IRA weren’t exactly overflowing with volunteers at that stage, and most of the books written on the subject would leave anyone with the impression that if it wasn’t for British agents in their ranks, they’d have struggled to field a single brigade. They could have used her help.

Getting away from the absurdity of her position, and onto the morality of it, Independent columnist and all-around good-guy Jason O’Mahony makes an important point:

Let's be clear: it could very well soon be the official position of the nation of Ireland that the murders committed in Enniskillen, Warrington, etc were legitimate and are endorsed by the Irish people today through their Taoiseach. That she now claims them in our name.

Plenty of people, as the recent election made clear, consider the events in Northern Ireland to be old news, and not worth basing their votes on. That’s reasonable, and one could make the same criticism of people who voted for Fianna Fáil on the basis that they apparently don’t care about the national humiliation inflicted in 2008. But the difference is this: Fianna Fáil at least profess to admit that 2008 was a national humiliation, and the result of mistakes.

With Mary Lou, on the other hand, we’d have a position where the policy of the Irish government is that killing kids in Warrington and Enniskillen was grand because there was a political context to it. An Irish Government, in other words, that retroactively legitimised the actions of that bunch of defeated thugs and proclaimed that they were right all along. That’s a very different proposition. It’s one thing for Sinn Fein to have that policy, it’s quite another for it to be the official position of the Irish Government.

Anyway, this is one of those things that either bothers you, or it doesn’t. There’s not really much point in saying “it should bother you” because that just provokes lengthy whataboutery arguments from people who are dead set on voting for Sinn Fein anyway.

But then again, it’s also true. It should bother you.