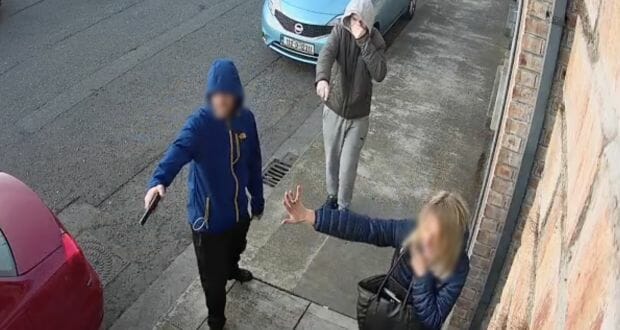 Yesterday, two thugs attacked and robbed a woman at gunpoint in broad daylight in the centre of Dublin.

It’s a far too regular occurrence. You go online or read the paper and there’s an article about yet another random act of violence where someone was stabbed or beaten up on a night out, at a party, outside a pub, at a friend’s house.

The story is the same, as is the outcome. There was a moment of anger, of stupidity, someone got killed or badly injured for no reason. Lives were destroyed forever. The end.

And all for what? Some angry idiot or idiots did something stupid.

This week, I was reading about of twenty-year-old Luke O’Reilly, who died tragically on Halloween night in 2017 after a ‘one punch attack.’

Janet O’Brien, Luke’s mother told Independent.ie how the family was plunged into a nightmare following the tragic death of her ‘gentle and lovable son.’ She fears that too many cheap alcohol offers, can increase the number of such attacks and urged young people to think twice when they are out drinking as “you can ruin your life and others.”

That’s exactly what apprentice carpenter Jack Hall Ellis (21) did to her family, when, acting in “drunkenness and anger,” he punched Luke once from behind without warning as they left a pub on that fateful night.

You often read that the perpetrator was ‘angry.’ Angry at what? Angry that the world owes them? Angry someone was in their way? So angry that they have to punch someone so hard, they died after?

That’s almost like it was someone else’ fault. Blaming cheap booze? Sorry but no, it’s not alcohol’s fault that scumbags can’t control their anger. Cheap alcohol doesn’t turn you into a thug. Lots of us drink cheap booze from time to time, young or not. We need to stop blaming alcohol and drugs, socio-economic backgrounds, parents, teachers, the government, the gaming industry, the church, school, unemployment, pub opening times or TV shows for gratuitous violence.

Perpetrators of violence aren’t victims. The victims are the families, who not only had to go through not only the torture of losing a loved one, but also losing them so flagrantly to someone who was ‘angry.’

Actor Darren Healy says he has to forgive himself every day for killing Philip Bryan after a night out in June 2005. Healy was in Eamonn Doran’s pub in Temple Bar when he was involved in a violent incident that left Bryan with such serious injuries, he died three years later.  “I just hit him and he tripped over a chair and hit his head,” he said.

He didn’t spend any time inside but spent the next “10 years in hell.” Bryan’s family will spend the rest of their lives in hell.

No doubt, Healy didn’t set out to kill someone, but very often people don’t. Others do and they get away with lots before they finally go to jail. There seems to be a misconception that people who go through stuff have a free pass to behave badly. So, it’s OK to destroy lives, because you had a hard time. No, its not.

You leave childhood, become an adult take responsibility for your own life.

But some men don’t. I know men who never get in fights- most of them obviously. Then I know a few, who do and it’s never their fault. They can’t fathom that an innocent person could get killed because of them. How stupid are they?

Most victims of violence are men

According to the Garda Analysis Service, most assaults come from men between the ages of 18 and 39 in public places between 8pm and 5am at the weekend. 25 percent of the time, they’re intoxicated to some degree, while 83 percent of offenders in assault cases are male. Only 55 percent of assaults are reported. So, every night in every town in Ireland sucker punches, fights outside pubs, general scumbag behaviour occurs and doesn’t get reported. I’ve seen it happen.

The perpetrator will say things like, ‘I drank on an empty stomach,’ I was having a bad day.’ “it’s not my fault, ‘he fell on my fist,’ ‘he must have done something to annoy me.’

No you’re just a thug, a menace to society and a danger to yourself and others. There needs to be a system where people who get in fights regularly, just go to jail quicker or if they’re not working, be forced to work or have their social welfare taken off them, so they can’t afford cheap drink.

So how do I keep safe?

Men are more likely to be the victim of assault than women.

There is a massive difference to how men and women experience violence, and yet men are never warmed of walking home alone, even though they are more likely to be attacked by scumbags.

Last year, ‘Use Your Brain Not Your Fists’ the public safety campaign by An Garda Síochána aimed to reduce the number of assaults carried out by males between 18 and 39 years of age.

The vast majority of assaults that occur are needless and avoidable. There is little you can do to stop a violent thug, so it’s important for men, especially young men to try not to be a hero.

Never attempt to reason with drunk or aggressive people. Walk away and look for help. It’s not worth your life.

There are no winners. If you know men who are prone to getting in fights, don’t hang out with them. It’s only a matter of time before something goes horribly wrong, and never drink with them. Look after yourselves walking home. Stay with friends. Women are conditioned into staying in groups, men wander off. There needs to be more dialogue about men’s safety at night.

Men have more testosterone, and upper body strength. A woman would have to be built like an East German shot put olympian to cause harm, so even if we do lash out, it’s a smack, not a death sentence.

With Halloween and Christmas coming up, talk to men about their anger issues. It’s hard to do, but report fights and random violence.

Life’s too short to spend in jail and ruining lives. Pretty much every single thing in the world, is better than getting in a fight. Let it go. Join a gym. Have fun instead.