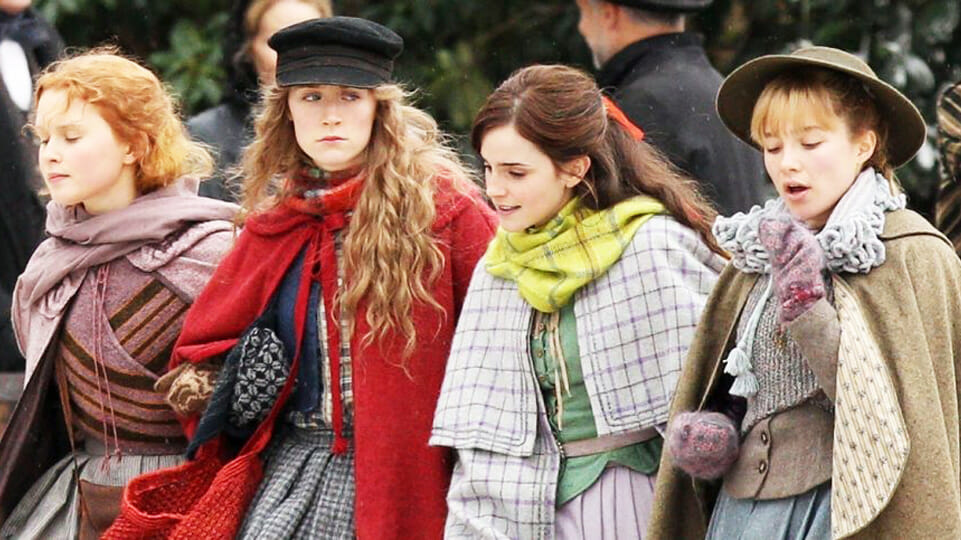 I was reluctant to see Greta Gerwig’s film production of Louisa May Alcott’s Little Women. Hints of overplayed feminism permeated reviews, and surely no one could play a better Jo than Katharine Hepburn. I was glad I did. Gerwig’s original film adaptation brought this children’s classic to life in ways earlier movie versions did not.

Those who have not read the book may need time to adjust to Gerwig’s intermingling of the plots from the two parts of Alcott’s novel, which were published separately in 1868 and 1869 respectively. This technique enables the viewer to delve more deeply into the characters of each of the four March sisters, Meg. Jo, Beth and Amy, who form the focal point of the story.

The film begins when the girls are grown. Jo (Saorise Ronan) is already working as an author in New York City to earn money to help support her family. Meg (Emma Watson) is married with twins and still struggling with her attraction to beautiful, expensive things. Amy (Florence Pugh) is studying art on a European tour with wealthy Aunt March (Meryl Streep), though in Alcott’s book it is another relative who takes Amy. And the ailing Beth (Eliza Scanlon) is still able to play her beloved piano.

As Jo remembers her life in Concord, Massachusetts, the movie tells the story of these sisters as they move from childhood to womanhood; but rather than follow a traditional timeline Gerwig juxtaposes scenes from each of their lives, highlighting their strengths and weaknesses. The result is an enthralling presentation of each of Alcott’s characters. While Jo is the protagonist of the story, the other three sisters are given a fair showing, and the casting is impeccable. Even Laurie (Timothée Chalamet) looks like he stepped right out of the pages of the old illustrated version I remember reading as a child. I said to my husband, who accompanied me to the theater in spite of never having read the book, “They were exactly as I imagined them.”

Most touching is the manner in which Gerwig captures relationships among the March girls themselves and with their mother. Marmee (Laura Dern) is soft spoken yet morally demanding of her daughters in keeping with Alcott’s depiction. She is no stranger to interior conflict and admits to hot-tempered Jo that she too struggles with anger, validating her efforts to mold her children’s characters. The four girls are clearly best friends and fight, defend and love each other as sisters close in age will.

Many reviewers have focused on feminist elements in the plot. Louisa May Alcott modeled the March sisters after her own family and Jo after herself. She never married and negotiated her own contract with her publisher, as does Jo in Gerwig’s film. Alcott wanted Jo to follow in her footsteps and remain single, but the dialogue between Jo and her publisher once again reflects Alcott’s own experience. Both writers revise their stories to please their publishers who insist the public will want a married heroine.

At first glance the movie appears to define marriage as a financial necessity for women. Aunt March tells both Jo (and Amy for that matter) that she must marry rich in order to support their family, though she understands why Jo does not wish to marry at all. Aunt March is presented as a wealthy spinster, but anyone who has read the book knows she is the widow of Jo’s paternal uncle. Jo does not want to succumb to this convention and at one point even expresses grief and frustration over feeling caught between her ambition and societal expectations:

Women have minds and they have souls as well as just hearts. They’ve got ambition and they’ve got talent as well as just beauty. I am so sick of people saying that love is just all a woman is fit for. I’m so sick of it! But—I am so lonely.
Gerwig explains in an interview that while those lines are not in Little Women, most of them appear in another of Alcott’s books. Be that as it may, they are not completely surprising coming from Jo, who has always sworn she will not marry. As an adult, however, she discovers that her fierce love for her nuclear family is not enough to satisfy the longings of her heart.

In the end, the movie pays homage to humble family life, hard work and loyalty. On the morning of Meg’s wedding, as Jo begs her to run away with her rather than leave their close-knit family, Meg responds, “Just because my dreams are different than yours doesn’t mean they’re unimportant,” words that many women who have chosen child-rearing and domestic work over careers will appreciate. Each of the surviving March sisters marries for love, not money. Aunt March may not be happy, but movie goers will be satisfied.

MICHAEL COOK: A life lived on the move