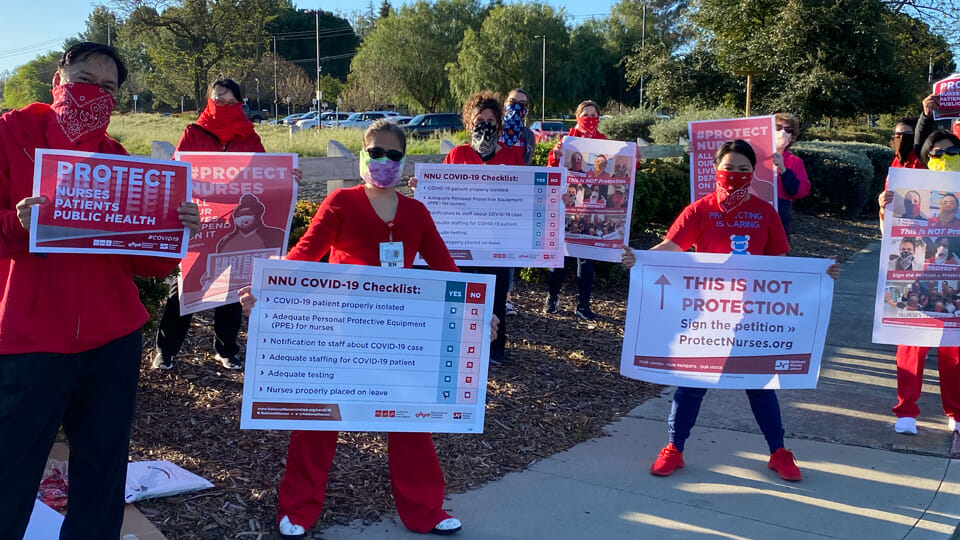 Nurses across the United States are protesting at the lack of protective clothing and equipment available to frontline workers in the fight against the Coronavirus.

Similar shortages in Ireland has led to anger and upset being expressed on social media by healthcare professionals, and appeals online for supplies of safety clothing.

Compounding the difficult situation for healthcare professionals in the U.S. is the fact that many hospital chains are privately owned in the country.

One such chain is HCA Healthcare, a major hospital chain which was the target of many protests over the past few days.

National Nurses United (NNU), is one of the largest nurse’s unions in the U.S.. They say nurses are being exposed and left unprotected. One nurse compared the dire situation with protective clothing as being like “sheep going to slaughter”.

“When we are infected, no one is safe,” Kim Smith, a intensive care unit nurse in Texas now working almost exclusively with COVID-19 patients, said in a NNU press release from the protests. “When we are infected, we become a real danger of infecting everyone else around us, patients, hospital staff, and a risk to our own families.”

Jean Ross, co-president of NNU said nurses at various HCA Healthcare hospitals have reported that they have had to work without the personal protective equipment required.

“Nurses say they are not informed when they (are) exposed to an infected patient,” she said in the press  release. “They are told to unsafely reuse masks and at one hospital they are even being told not to wear masks because it ‘scared the patients.'”

Protests were held a hospitals in California, Florida, Missouri, Texas, Nevada and North Carolina, and follow similar demonstrations in New York, Georgia, Illinois and California cities on the same issue.

The NNU says that HCA “can well afford to be properly prepared for the pandemic” having made $23 billion in profits in the past decade. “For the wealthiest hospital corporation in the United States to show such disregard for the health and safety of its caregivers, is disgraceful and unconscionable,” said Jean Ross.

Wow #Bronx Nurses spoke out big time!!!! "Feel like sheep going to slaughter at work" "you wouldn't send police out without bullet proof vest why are we refusing #PPE" "I wrote my will I am 28 years old"

Protests were also held right across the US with these nurses in San Francisco saying they were scared and angry about the lack of protective equipment.

They’re scared and angry about the lack of PPE for people on the front lines of this pandemic.

It’s a disgrace that we’re not protecting those who fight to save our lives. #COVIDー19 #COVID19 #coronavirus pic.twitter.com/whqDs8lG4c