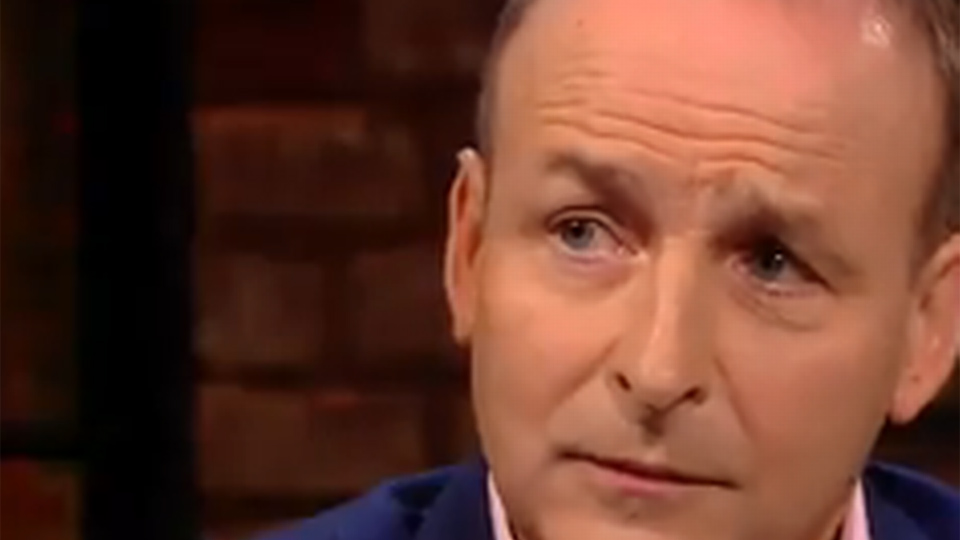 It is important, generally, to try and not get personal when it comes to the people who govern us. For the most part, they are doing their best. Being wrong, as they regularly are is a human fault, not one that is specific to one party, or one person. Politicians want to be remembered well, for another thing. Hardly anybody goes into politics desiring to be remembered in history as useless and ineffective. In Ireland’s case, they all want to be the next Sean Lemass, or the next Michael Collins. Few of them succeed, but ego usually makes them at least try.

So, when you read the headline up there, know that it is not saying that Micheál Martin is a bad man, or anything like that. He has many admirable qualities. He rose from abject poverty as a youngster. He’s experienced more than his fair share of personal tragedy. He seems very genuinely to care about improving the lot of children from poor backgrounds. He is very committed to education – and civil servants in that department would tell you that they’ve not had a better Minister since he left.

But he can’t lead.

We knew he couldn’t lead when he got the job. Three times he has led his party into an election, and three times the Irish voters have said “no thanks”. The voters are many things – few enough of them good – but they do instinctively recognise strength and clarity.

Micheál Martin lacks both. At a time when the country has rarely needed them more.

Witness, if you doubt me, the mess this morning. Thomas Byrne, the Minister for Europe, called on Phil Hogan, the EU commissioner, to resign. A few minutes later, the Taoiseach went on the radio and declined to back either his Minister, or the commissioner. All that this did, of course, was guarantee another day or two of stories about the golf dinner from hell.

If Hogan does not resign (and he won’t, he’ll have to be sacked) Mr. Martin will look as if he failed to lead. If Hogan is sacked, it will look like the EU Commission stepped in when the Irish Government was unwilling to make its position clear.

But the Hogan mess is just politics. Aside from the entertainment of it, it has very little practical impact on how the governance of the country impacts your life. The real problem with Mr. Martin is that he is unwilling to lead, properly, on the big issues of the day.

Ask yourself, genuinely, this question: What is the objective of the Government’s coronavirus policy?

Is it to eliminate the virus? Clearly it is not, because the schools are re-opening and the Tánaiste says this will lead to new clusters and outbreaks.

At most, we can discern a policy that seems to react to the positive test numbers on a given day. 200 new cases? Better shut down Cork. 60 new cases? The plan is working.

And who is in charge of policy? Is it the Government, or is it NPHET, the team of doctors who have worked so hard, and served us well, but who were never elected by anybody?

The Government is pursuing a policy which, it says, will lead to more outbreaks. But it is then responding to each new outbreak with another painful shutdown. Can we scream it loud enough that this makes no sense? If your reaction to each outbreak is more painful restrictions, why would you pursue a policy that by your own admission will lead to more outbreaks? It’s like a fella who promises himself he’s going to run fifteen miles up a mountain every time he uses bad language, and then curses himself the whole way up the hillside.

The Government looks frazzled and leaderless. Is Mr. Martin in charge, or is Mr. Varadkar pulling the strings? It is also allowing itself to be made look weak and pointless: Witness the protest on Saturday. Many Gript readers will have cheered the protest, as have many of our writers: But if the regulations meant anything, then the protest should never have been allowed to take place. What’s the point in telling everyone to wear masks when you allow three thousand people to stand on top of each other in public not wearing a mask? If Mr. Martin had sent in the Gardai and broken it up with force, our readers might have cried tyranny, but at least the Government might have looked consistent, for once.

Contrast Mr. Martin, if you will, with his counterparts in London. Both have had their fair share of Coronavirus disasters, many of them self-inflicted, but there’s no doubt, at this stage, that the British are many miles ahead of us in terms of coming out the other side.

He’d better up his game, and quickly.