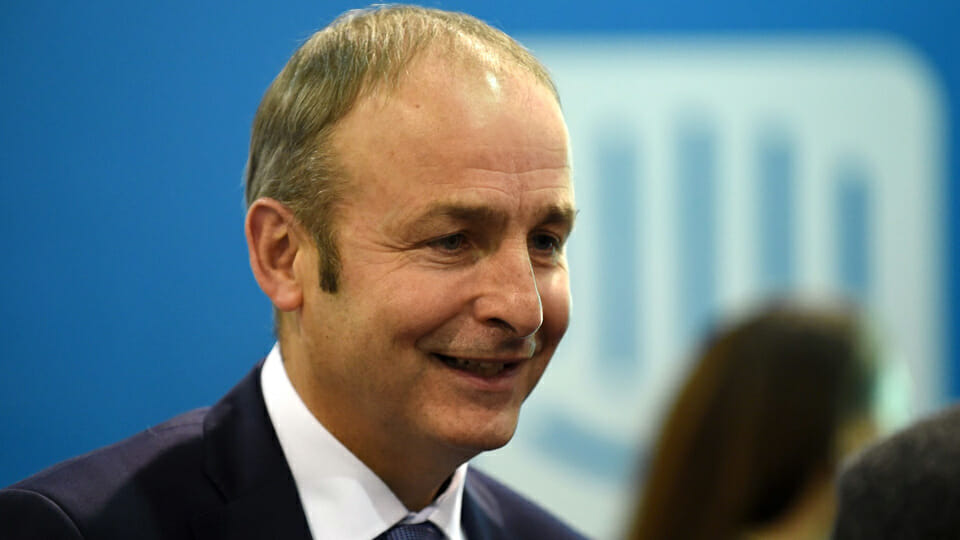 A poll at the weekend was very clear: The public, given the choice, would really rather not have Micheál Martin as Taoiseach. By a 48% to 18% margin, given the choice between the two men, they want Leo Varadkar, not the Fianna Fáil leader.

In recent opinion polls, Fianna Fáil have the support of between 15 and 20 per cent of the voters. In the three general elections into which he has led the party, Micheál Martin’s Fianna Fáil has failed to emerge as the largest party. In fact, in the history of Fianna Fáil, Mr. Martin is the only leader of that party not to have won the most seats in an Irish election, and he has done it three times.

In any case, this is the state of Fianna Fáil as they propose to enter, and lead, a Government: By some distance, the third largest party in the state, and virtually non-existent in the capital. An aging, and atrophying membership. No obvious successor to Mr. Martin, which is the only reason he’s still there.

Fianna Fáil is now entering a Government which it proposes, nominally, to lead. But it is doing so without any sense from either the public or the press that this is going to be a Fianna Fáil government. The media, by and large, are clear, and exultant, that this is going to be a Green Government. By standing aside and allowing Mr. Martin to become Taoiseach, Leo Varadkar gets the advantage of being able to clearly lead his own party in the Government, and publicly wielding, where he sees fit, a veto on behalf of Fine Gael. Martin, as Taoiseach, will have to endorse every Government decision.

In this Government, Fine Gael and the Greens will be able to preserve their identities. Fianna Fáil will find it much more difficult to do so.

If you read the coverage this morning, that’s already evident. While the Greens dominate proceedings, there’s also repeated reference to Fine Gael guarantees on income taxes. If you can identify a single obviously Fianna Fáil policy, then you’d have to be working very hard, and command exceptional knowledge of the exceedingly bland Fianna Fáil manifesto.

The challenges in health and housing have not gone away, and will not go away if politicians cuddle up to each other and play nice, as seems to be the thinking. The Coronavirus crisis is on the verge of tilting from a net positive for politicians to a net negative – if, for example, schools can not re-open fully in September, who will get the blame?

The Carbon Tax has never been popular, and it won’t become popular overnight. In rural constituencies where there’s no Green TD to throw out, who will be thrown out in vengeance at the next election?

At the centre of this will be Micheál Martin, a politician whose entire career has been spent vacillating from one committee to another, constantly postponing hard decisions in favour of another commission. In almost forty years in politics, the best thing that can be said of him is that he introduced bans on smoking in pubs, and on plastic bags – but neither of those were his ideas, in truth, and besides, both fall into the category of courageously taking a popular decision.

Mr. Martin will not pay the price for the record of the next Government, personally, of course. His seat in Cork is safe, and besides, once he’s been Taoiseach for a while he can retire and have someone write a biography of him in twenty years called “the reluctant statesman”, or something. No, the price for it will be paid by Fianna Fáil TDs and councillors up and down the country. If there was an election tomorrow, lots of them would lose their seats. It’s foolish for them to delude themselves into thinking that five years in Government will make them more popular.

This is a Government, and a Taoiseach, that nobody wants, coming into office for the express purpose of making decisions and doing things that are not popular. It enters office with no political capital, and no margin for error. It will be divided down the middle between its Green and Fine Gael wings, with Fianna Fáil playing piggy in the middle, taking the blame for the excesses of both sides.

All of this – and this is something everybody knows to be true, whether they admit it or not – for the purpose of fulfilling Mr. Martin’s sociopathic urge to become Taoiseach of Ireland at any cost.

Fianna Fáil TDs and Ministers would want to enjoy this spell in power. It may be their last. It will, in all certainty, be the last time that they lead a Government.

Lisa Smith is not one of us, no matter how much she wants to “come home”

The Gardai should have no right to your phone password