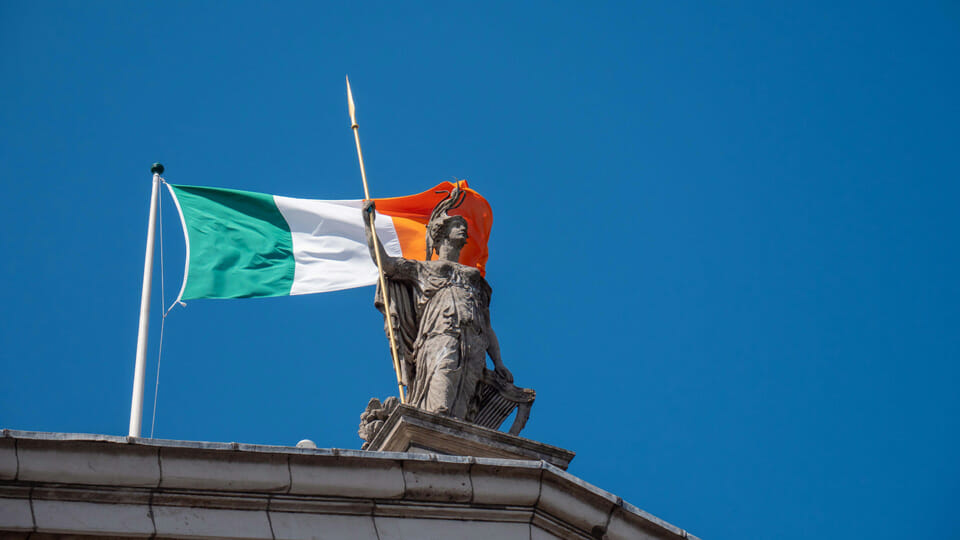 After a long career as one of Ireland’s most well-known, admired and provocative writers, John Waters announced last week that it was his intention to run for Election in Dun Laoghaire. The views expressed here are John’s alone; Gript.ie does not endorse candidates in elections.

Back in the early 1950s, before I was born, a book called The Vanishing Irish was published in the United States. It contained 18 essays by 15 contributors, all describing the demographic catastrophe then believed to be threatening the very survival of the Irish people, the main factors being late marriages and emigration. Among the contributors were the writer Seán Ó Faolain and the great essayist John D. Sheridan. In a contribution entitled We’re Not Dead Yet, the latter wrote of the “racial despair” then afflicting Ireland, a despair he traced back to the “Great Famines” of the 1840s, which he believed had instilled in the Irish a belief that “the race could not survive”.

“Despair of this kind is deeper and more lasting than any personal despair,” he wrote, and had “left a stain of pessimism on the Irish character.” Even a century later, we had not recovered from the shock of near obliteration. “The memory of it is still somewhere in the whorls of our minds. Without being conscious of it many Irish people are afraid to marry and have children without an assurance of material prosperity which more buoyant peoples do not require.”

Yet, records indicate that Ireland’s fertility at that time was 3.4 — twice what it is now, when we appear not even to consider the possibility that we may be facing a crisis of demographics or survival. Ireland’s fertility rate of 1.7 last year follows a decade of continuous decline, from a recent high of 2.06 in 2009.

The current figure has yet to reflect the full effects of the introduction of abortion in 2018, which (at a rate of approximately 10,000 per annum thus far) will almost certainly take us to the demographically significant figure of 1.6, beyond which populations are prone to falling off a cliff within a couple of generations.

In The Vanishing Irish, the writer Seán O’Casey was quoted in his fear that Ireland in 1953 was “withering”: “We’ve spread ourselves over the wide world, and left our own sweet land thin.” The warnings were heeded, and within two decades the fertility rate had climbed to nearly 4.

Still, traces of the conditions that O’Casey, Sheridan and the others adverted to may still be with us, albeit manifesting in different ways. The zeal for abortion must surely be regarded as one such manifestation, but also the silence that has met the inundation of Ireland over the past two decades with what are insultingly termed “the new Irish” — alleged refugees, asylum seekers and others who have come here as part of a wave of displacement now occurring on a global basis. Without consultation with the people, the political class, under instructions from elsewhere, threw open the gates. The media refused to lead any kind of discussion on the topic, but instead ensured that anyone daring to speak about it was immediately drowned out by a wave of vitriol.

The English writer Douglas Murray, in his 2018 book The Strange Death of Europe — in a remarkable echo of the rumination of John D. Sheridan —writes of his belief that “Europe is committing suicide.”

“Or at least,” he continues, “its leaders have decided to commit suicide. Whether the European people choose to go along with this is, naturally, another matter … I mean that the civilisation we know as Europe is in the process of committing suicide and that neither Britain nor any other Western European country can avoid that fate because we all appear to suffer from the same symptoms and maladies. As a result, by the end of the lifespans of most people currently alive Europe will not be Europe and the peoples of Europe will have lost the only place in the world we had to call home.”

This is the core of it: the loss of our home. Whereas the vast majority of those who come here will continue to have another place — their home country — to go back to should they wish, we, the native Irish, will have nowhere to go in the event that our country becomes unliveable in. The symptoms that in the 1950s were, in comparative terms, somewhat mysteriously attributed to a country with a fertility rate of 3.4, are now afflicting the entire continent.

Murray goes on: “Europe today has little desire to reproduce itself, fight for itself or even take its own side in an argument. Those in power seem persuaded that it would not matter if the people and culture of Europe were lost to the world. Some have clearly decided (as Bertolt Brecht wrote in his 1953 poem ‘The Solution’) to dissolve the people and elect another …”

Murray identifies two main causes for Europe’s drastic situation. One is mass migration into Europe, which he says turned Europe from “a home for the European peoples” to “a home for the entire world.” The lack of integration and assimilation turned innumerable places in Europe into places that were not European in the least. Whereas those we somewhat laughably call “our” leaders insist that we treat the newcomers — the “new Irish” with forbearance, respecting their different cultures, rights and demands — we, the host culture, must stand down our beliefs, culture, traditions and allegiances. Crucifixes must be removed from public spaces; prayers must be replaced with mindfulness sessions.

Meanwhile, back “home” in Ireland, there has been zero integration, and zero attempts at integration. We have imported, in effect, a motley collection of ethnicities, which have been led to believe that they can continue in our country as if they had never left their own. They are being taught — by Irish NGO operatives — to regard themselves as Irish and to reject as “racist” even a simple question as to where they come from. As Murray points out, no European can go to China and begin calling himself Chinese: only Europe extends this as an unquestionable entitlement.

Murray sombrely describes this complicity by Europeans in the destruction of their own beliefs, traditions and legitimacy. We Europeans have forgotten that everything we love — “even the greatest and most cultured civilisations in history, can be swept away by people who are unworthy of them.” He has in mind those among us who insist that European culture must roll over to give space to the incoming cultures. The myth of progress is used, he says, to blinker the people of Europe to the calamity unfolding in their midst. Europe is weighed down with guilt about its past, which paralyses us even when we are not guilty. And there is also, he says, a problem in Europe of “existential tiredness and a feeling that perhaps for Europe the story has run out and a new story must be allowed to begin.” In other words, “racial despair”.

We have destroyed a culture of string beliefs in transcendent ideas and ideals, an ancient tradition based on philosophy, ethics and the rule of law, with a shallow anti-culture based on spurious strains of “respect”, “tolerance” and “diversity” — trite concepts with no effective meaning in this context other than a denial of the right of members of the host cultures to speak their minds in the face of their potential obliteration.

The loss of unifying stories, says Murray, “about our past and ideas about what to do with our present or future” would be a serious conundrum at any time. During a time of momentous societal change and upheaval, such a loss is likely to prove fatal. “The world is coming into Europe at a time when Europe has lost sight of what it is. And while the movement of millions of people from other cultures into a strong and assertive culture might have worked, the movement of millions of people into a guilty, jaded and dying culture cannot.”

We stand, then, to lose our home, the home of our children, the Irish generations as yet unborn. Already weakened by a history of occupation, genocide and forcible cultural reconstruction, we have lacked the clarity and courage to defend our sweet land, its ways, laws and culture. We are allowing ourselves to be bullied into self-destruction by people who clearly have no love for Ireland or its people, who do not care if we survive or not, or about who lives in Ireland or calls it home — provided they can ensure their own immediate futures and the success of their ideological projects. Seventy years ago, the Irish were afraid to marry; now they are afraid to open their beaks. Irishness is already the hole in the doughnut in Ireland, as self-assertive “new Irish” move in to take the prizes promised them by people without a mandate to do so, the same bully-boys and bully-girls who seek to drown out or intimidate into silence those who dare to stand and ask a question about what is happening.