James Annan is a climate scientist involved in climate prediction, who has made a number of well-known bets against people who disagree with him around climate predictions. In March, he and his associate Julia Hargreaves were looking at the pandemic modelling and predictions that the government in the UK were relying on. Even though it is a different domain, the statistical, mathematical and modelling skills involved are similar and he put his skills to building a relatively simple model that allows the data to estimate model parameters as is done in his climate modelling.

He built and tested, and has now published, his model and found it consistently has predicted deaths from COVID-19 far more accurately than the official models the UK government is using. He is also extremely critical of the manner in which epidemiologists are modelling the pandemic claiming they are not using modern best-practice methods. Whether or not his criticisms are valid, his model clearly has shown better predictive skill.

The model takes as input data only the daily death numbers as the positive test cases are too unreliable due to different countries having completely different approaches to COVID testing (some in hospitals only, some generally in population etc.) However, the daily death data isn’t without its own problems as there is a time lag between deaths and the reporting of deaths and also whether or not all those deaths are actually deaths caused by COVID or only death with COVID. He has published the summary graph for the UK and other major European countries but not Ireland so I set to modelling Ireland’s performance. The graph below is the output from the model for Ireland using Worldometer data which is based on the date deaths were reported. The data up to April 17th was used to estimate the model parameters and it predicts the weeks into the future with the actual data for the following 2 weeks (up to April 29th in blue) plotted against the forecast. This is shown in the figure below: 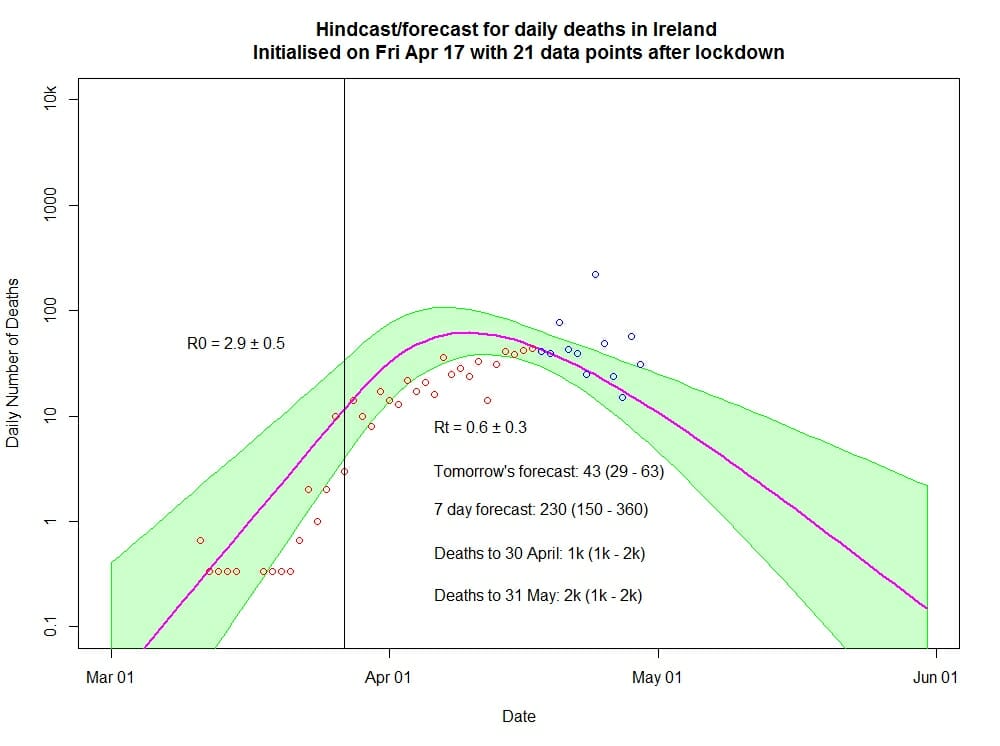 The output shows that the COVID Basic Reproduction Number R0 was around 3 before social distancing and/or lockdown measures were introduced. The date for the change in social norms for the above was March 27th, however, and earlier date can be chosen as clearly the early social distancing was also reducing the R0 value but there are too few data points for a reliable estimate at an earlier date. The model shows that the R0 number in this phase after the lockdown (called Rt in the graph) is well below one and very unlikely to be over 1. It is important to point out that this is from the data that was available in mid–April and when the model is re-run for all data up to April 29th the reproduction number is again 0.6 but this time with error bars of +/-0.1 which means there is little to no possibility it is above one. Some of the blue data points are well above the forecast estimates but that is a problem with the data not being corrected for date-of-death and not date-of-reporting as there is no way there was 220 deaths due to COVID in Ireland on April 24th which is in the Worldometer dataset. In summary, the data shows robustly for at least 3 weeks now that the reproduction number is below one, and if our Government have any competence at all, this should be clearly known to them.

From March 18th onwards, I tracked daily reported positive test cases in Ireland and by March 22nd it was very clear to me that Varadkar’s figure of 15,000 by the end of March was way off. I predicted around March 23rd between 3,000 to 5,000 by the end of the month and was barely right with the number being just above 3,000. When the lockdown was imposed on March 27th I couldn’t believe the Government had imposed it as the situation then was so much better than the experts had predicted in mid-March. Clearly, the closing of schools and some businesses and social distancing was already having an impact but it is hard to tell from the data due to the scarcity of data in early March. Sweden has proven to be an outlier in how it has approached the pandemic and has introduced only mild measures to limit the growth where it hasn’t closed schools, businesses, restaurants etc. but has limited large gatherings and encouraged general social distancing in social and business settings. Insofar as Sweden is reported in the media in Ireland, it is generally pointed out that Sweden has a higher mortality rate and spread of the disease that either of its Scandinavian neighbours which is true – but it is only a partial truth.

The Swedish government, unlike in Ireland, is publishing daily infection and death data which is being corrected for date errors as they receive the information. This data was used in the pandemic model to see what impact has Sweden’s measures had on their reproduction number. The output of the model is shown below (calibrated for data to April 15th): 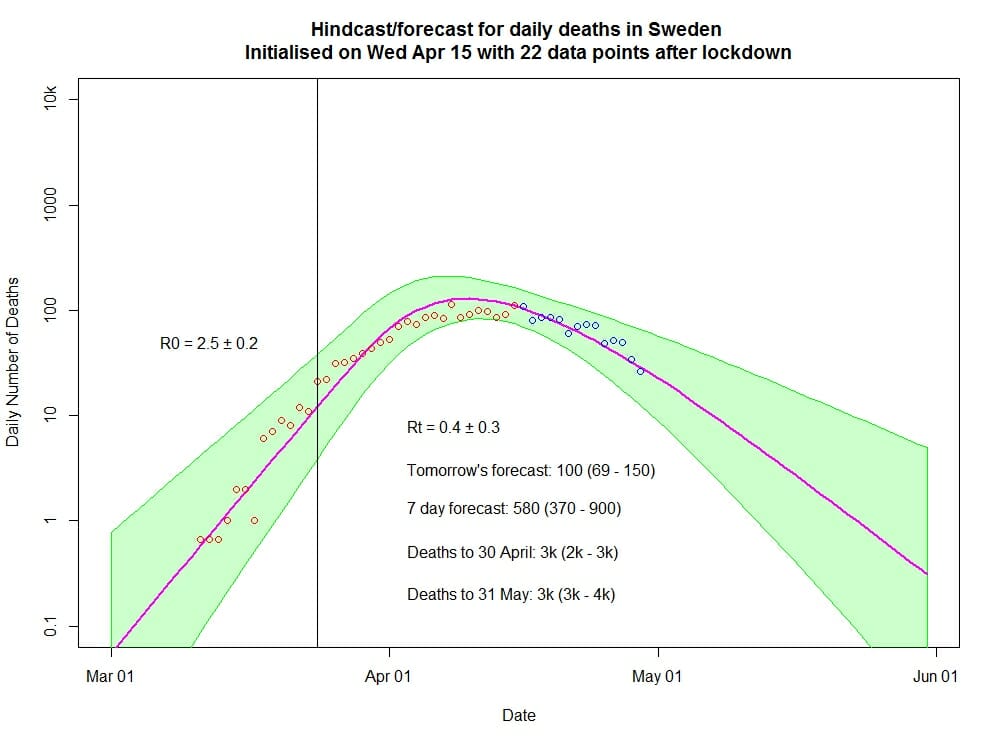 As can be seen the reproduction number for Sweden is lower than Ireland albeit with larger uncertainty. Remodelling with all of the data up to April 29th and the reproduction is lower again at 0.3 and with lower uncertainty of +/- 0.2. The cleaner Swedish data is also evident as the large daily jumps in the Irish data is mainly a reporting problem and not a large variability in daily deaths.

There is plenty of data based evidence, for at least a few weeks now, that Ireland’s basic reproduction number (R0) is well below one and also that countries that adopted much milder social controls to limit the spread of the disease also have reduced that number to well below one (e.g. Germany didn’t confine people to within 2km of their homes but also has dramatically reduced its R0). Checking the gov.ie website the official government modellers do indeed report a reproduction number well below one but that modelling (at least in terms of what they have publicly published) is dated April 23rd and nothing since then. For a Government that claims to be science-based in their decision making there is a complete lack of openness and accountability of what data or models are being used to make the decision to continue the draconian lockdown here. It’s not as if the stakes are low: continuing the lockdown has major implications on people’s physical and mental health as well as the economic cost in terms of lost output and social welfare increases.

The Government need to get real and scale back the lockdown this coming weekend and publish the phased plan to return the economy to normality with targets for the activation of each phase. Continuing this lockdown for another 1 to 3 weeks beyond this coming weekend will do immense harm and almost no good whatsoever. Let’s all hope that Irish democracy isn’t one of the victims of this pandemic!

Liberal Catholics are the useful idiots of woke ideologues

A second election is starting to look very likely indeed.