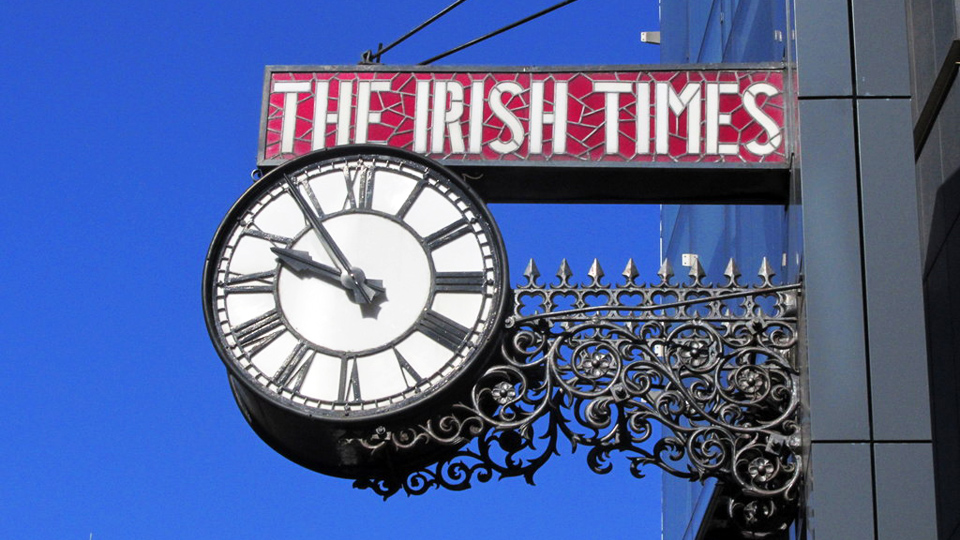 To be fair, “put us on the payroll” isn’t quite how the Irish Times Group phrased their submission to the Government’s “future of media” commission. But make no mistake, that’s exactly what the paper is asking for.

Its submission, which can be read here, on the Irish Times website, calls for “a framework of financial assistance (from the taxpayer) to support employment in journalism”, including funding for “specific public service oriented journalistic roles”, and “support for newspaper distribution, costs, and postage”, and “transitional funding to support investment in technology”.

In other words, they want financial support for all the biggest cost items in their business: Employing journalists, investing in technology to produce their newspapers, and subsidies for the cost of distributing them and (hilariously) posting them. In other words, if you subscribe to the Irish Times, and request a daily copy, the paper wants the Government to fund the cost of posting it to you.

“Home delivery has been a successful initiative for The Irish Times in the greater Dublin area and has been extended to Cork. But it is expensive to provide and is another area of potential state assistance”, proclaims the submission.

Has there ever been a more wasteful proposal about how to spend public money than this? The Irish Times is supposed, remember, to be a watchdog for the public. Their job is to report on instances of wasteful public spending, and the mis-use of taxpayer funding.

And yet, here are the watchdogs themselves, whimpering for the Government to pay the costs of sending a newspaper through the post in the age of the internet. In any sensible country, they’d be laughed out of the public square for that one.

Ireland, of course, is not such a country. So, this nonsense may well be taken seriously. And the chances are, you won’t read why it’s a terrible idea in any of the major newspapers – since they’re all seeking taxpayer funding, ironically enough, to facilitate debate.

It’s a terrible idea, though, for a number of reasons.

First, a subsidised press simply is not a free press. When Denis O’Brien was the main proprietor of Independent News and Media, it was not especially surprising that bad news about Denis O’Brien rarely made the front pages of the group’s titles. It’s not a good idea, after all, to irritate the people who pay your wages.

All media, to some extent, are compromised by those who fund it. It’s a very rare media proprietor who would allow the outlet whose funding they control to launch extensive investigations into their own conduct. The same is true, to some extent, of advertisers: It’s an open secret in this country, for example, that in some newspapers, (not, to be fair, The Irish Times) purchasing a full-page ad will be re-paid at some point in the future with a nice fluffy news piece.

But that’s not where the problems end.

This measure, if adopted, also closes down the market by giving the incumbent papers massive advantages. Let’s say, for example, that some madman replaced yours truly here at Gript, and decided that our future lay in posting out physical newspapers to people in Dublin Six. We’d then have to compete, on cost, with the Irish Times, who were having their postage paid by the Government. The same would be true of any new entrant into the market.

These organisations would be conferred with massive, anti-competitive advantages over any new market entrants. The salaries of their staff, and their production costs, would be subsidised by the taxpayer.

Simply to be allowed to compete with them, a new entrant would have to be approved by the Government for funding. And why would the Government do that? New entrants, by definition, tend to be disruptive and unruly, and bring change and instability to the marketplace. Governments hate that sort of thing. And this measure makes that harder. That’s good news for the incumbent papers, and horrible news for anyone who would like to see an alternative.

But the rubbish nature of the idea doesn’t end there: Who even decides what “media” is, anymore? You can be sure, for example, that Gript won’t be getting a penny of this funding (not, mind you, that we’re minded to apply, since we value our independence). Online platforms have a right to compete in this marketplace, as well. The Irish Times website, for example, is just that: A website. There’s no reason why they should be privileged over anybody else with a website, and the desire or willingness to report news.

All of those are media outlets. And all of them are competing with the Irish Times, and the Independent, and the rest of them, for eyeballs. How does the Government propose to allocate funding between them, if it proposes to do so at all? Why should, for example, the Irish Times get taxpayer funding when Dublinlive does not? Why should the Independent get funding, when Joe.ie has a better website?

This proposal is not a bailout for the media: It is a power grab by Government. When you fund things, you control them. The Government funds a lot of Irish NGOs. Not coincidentally, very few of those NGOs are vocally critical of Government. Many of them spend more time criticising people who oppose the Government than they spend criticising Government themselves.

The Irish Times is free to advocate turning itself into a Government mouthpiece. They’re also free to publish an op-ed telling you why that’s a terrible idea. Notably, they have not done so, yet.

Perhaps the self-censorship has already started.