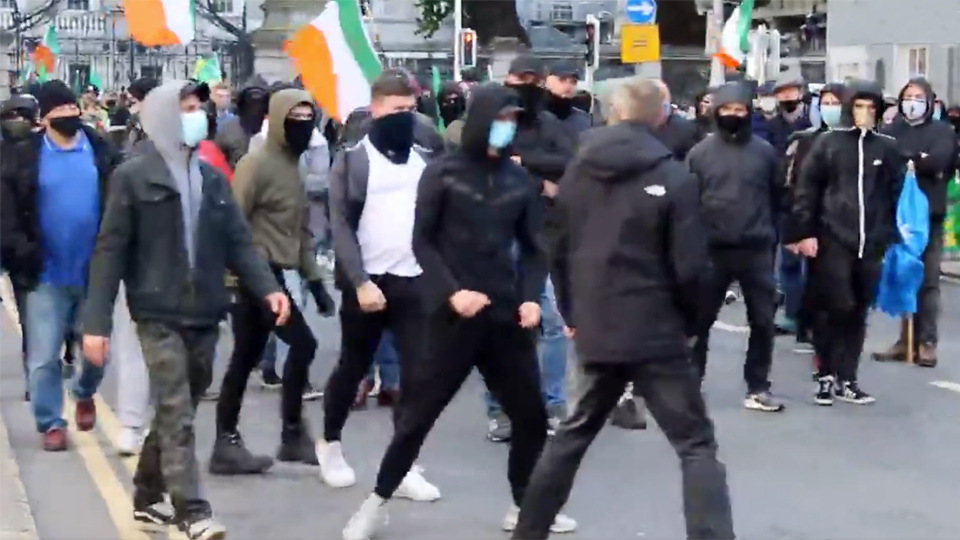 After all the media frenzy over the threat of the “far right” lately, it was a self-appointed lockdown far-left militia who were responsible for the violence in Dublin on Saturday. A group consisting of mostly it seems supporters of a deeply penetrated aspirational republican organisation, along with the usual ragtag of soccer casuals and ageing communists, took it upon themselves to attack a small group who were conducting a protest outside Leinster House.

Not only that, but they decided that they had been given some authority to demand credentials from journalists and assaulted at least one chap who just going about his business. Journalists, including one Irish Times reporter, were approached and when refused to comply with orders from the Dublin branch of the NKVD to “identify” themselves were threatened or asked to “move on.”

Who exactly do these people think they are? Whatever anyone thinks of the group that was holding the meeting, they were not breaking any laws and were entitled to protest, just as the ultra leftists who held a small rally at the GPO the Saturday previously were likewise well within their rights to do so.

But of course, the “anti fascists” don’t comply with that. Their contempt for democracy does not allow for anyone else to voice an opinion. Their supporters have posted threats to Aontú as “far right scum,” presumably for no other reason than Aontú opposes abortion.

The right of all democratic parties of left and right to voice their opinions and compete for political support was what the fight against fascism in the west was about. It was successful. No thanks to the communist saboteurs who only took the anti-Nazi side after their beloved Soviet Union was invaded when Stalin had almost crippled the country through terror and handed victory to Hitler through his alliance with Germany from 1939 to 1941.

So let’s nail all this bullshit about ‘No Pasaran’ and all the crap about being part of some mythical “anti-fascist” Dublin working class history. If there was a threat of a coup orchestrated by the Blueshirts, then it was the Fianna Fáil government which faced it down, not the tiny far left.

And let’s have some real history as opposed to myths. In 1940, eighty years ago when the German armies in Europe came within an ace of victory, the political antecedents of the groups who comprise ‘Anti Facist Action’ were all on the same side as the Nazis.

The oldtimey Stalinists, still represented by the pathetic old Communist Party were cheerleading the Stalin/Hitler pact, and their mothership in Britain was organising strikes and sabotage against the war effort. The May 1940 issue of the Communist Party of Ireland newspaper celebrated the defeat of the British by the Germans in Norway.

The Irish Trotskyist movement was founded by members of the Workers International League who left Britain rather than take the opportunity to fight real Nazis. And of course the pre-eminent hero of the Irish republican far left is Frank Ryan who in 1940 was under the care of the Abwehr.

So, spare us all the lectures comrades. People who question the current state policy on the virus, or who oppose abortion and euthanasia, or who lampoon your pretensions and the murderous ideology and made up history that inspire them do not need your permission for anything. As someone once said about the Weather Underground in the States, your existence saves the bother of the state having to invent you. Although the jury is out on that …