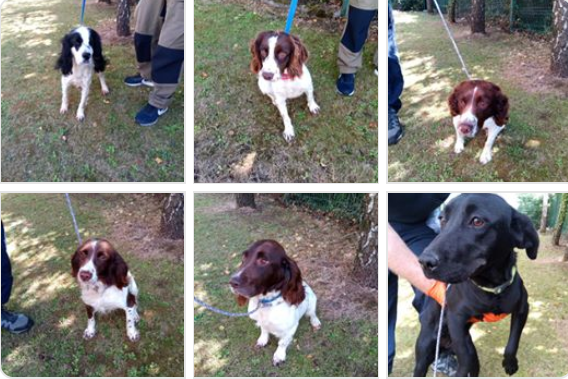 Kudos to the Gardai, who have responded to an apparent wave of dog thefts in recent weeks by raiding a property in Rathkeale, Co. Limerick, where they recovered ten very good boys who had been stolen from their owners by thieves. Gardai are now seeking the public’s assistance in re-uniting the poor doggies with their owners:

Gardaí have seized 10 dogs that are believed to be stolen following a search in Rathkeale, Co. Limerick on August 1, 2020.

Gardaí are now appealing to help trace the owners of the other 9 dogs.

It’s not the first recent bit of good news on the dog front, either. A few weeks ago, a farmer in County Meath issued a heartbreaking appeal to find his pet springer spaniel, who was stolen:

AN ELDERLY Irish man has appealed to the public for information in a desperate attempt to find his stolen dog.

85-year-old Mr Garrigan took to his Son Aidan’s Facebook page to ask for help after his 12-year-old springer spaniel “Brandy” was taken by thieves from his home in Trim, Co. Meath.

The elderly farmer described Brandy as his “best friend” and said that he is “more than just a dog – he is my reason to get up in the morning.”

Brandy has been missing since July 8, and Aidan admitted that his father “wasn’t doing well” and was sick with worry.

The day before the dog was taken, there was an attempted break-in to the farm and it’s thought the thieves spotted the dog and returned the following night to take him.

“All that matters is that I get him back,” said the pensioner.

Well, just a day or two ago, Brandy and Mr. Garrigan were re-united:

An 85 year old farmer has been reunited with his much loved dog, which was stolen from his home in Meath last month.

The pensioner had pledged to never stop searching for the 12 year old.

Brandy is believed to have been stolen from  his home in Brannoxtown, Trim on July eighth.

In an appeal two weeks ago for his return, his owner said the Springer Spaniel was “more than just a dog”  as he is his reason to get up in the morning.

Gardaí have confirmed that Brandy was located in Ballyfermot yesterday evening.

Here they are, the happy pair:

You can see photos of the dogs recovered in Rathkeale here.