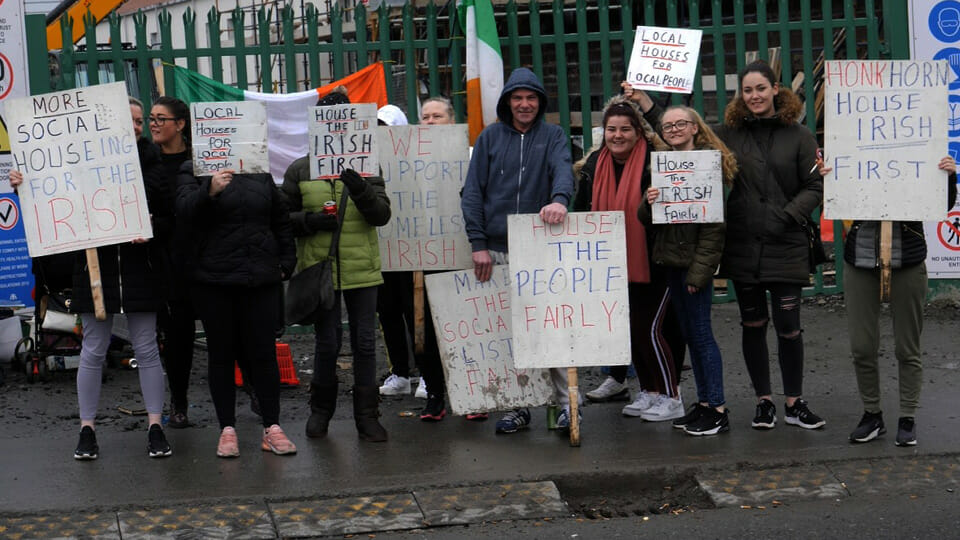 A group of protesters are gathering daily outside a social housing development site in Mulhuddart village for what they describe a “House The Irish First” protest. They believe the houses on site, though still under construction, have already been earmarked for foreign-nationals, despite the fact that many locals still remained on the housing list.

Protesters alleged that only a small amount of the social housing will be made available to Irish families, and that locals are being required to wait longer than foreign nationals.

“We’re out here today for fair housing for the Irish, and also for immigrants as well. Fifty-fifty we’re looking for, which we think is fair, because in every establishment that’s been put up around the area, there are more foreign nationals getting them than there are Irish people”, one protester told Gript. “We just want to talk to someone from Fingal County Council and Clúid and we’ll be on our way. Just someone from the State that’ll give us 50/50 – fair housing, you know?”

They said that political parties were ignoring the concerns of local people. Earlier this week a spokesman for the protest told RTÉ’s Drivetime that traditionally left-wing parties such as Sinn Féin and the Socialist Party were not being helpful.

BEAUTIFUL: meet the tiny premature baby who fought off Covid-19