Habeas Corpus [ hey-bee-uhs -kawr-puhs ] late Middle English: Latin, literally ‘you shall have the body’ – a writ requiring a person to be brought before a judge or court, especially for investigation of a restraint of the person’s liberty, used as a protection against illegal imprisonment.

The official death figures for Ireland this year, so far, have shown that there has not been a rash of deaths in excess of the normal level of mortality. In short, we have not seen the high number of excess death – or above average number of deaths – that we would expect from a continued pandemic or a plague.

However, next year, and in years thereafter, we will see excess (and entirely unnecessary) deaths because of the effects of lock-down on our society. This is according to projections based on the measured effects of lock-down on the health system by Dr. Scott Atlas in the USA, and by other figures coming from specialists around the world. Although there has not been a similar audit of the impact of the shutdown on the Irish health system, there have been warnings from health management experts and medical consultants that lives will be lost because of the shutdown. Illnesses that are not being diagnosed because of the shutdown include the big killers of cancer and heart disease.

The fear-driven paralysis of society we are currently experiencing is unnecessary and counterproductive. We will be seeing excess deaths in the coming years not because of the virus, but because of the response.

It doesn’t seem to be about to stop anytime soon as the government frantically push buttons and pull levers based on pure fear and stupidity.

The response to the question posed by the Covid crisis was never one of a good and bad response –the economy versus health choice. Whatever we did we would have consequences, it was a matter of which consequences were worse.

The following table, obtained from the General Register Office of the CSO by Financial Analyst, Graham Neary, shows the official figures of registered deaths in the state over the period January – August for the past six years. There are figures for September too but the low figure for September 2020 is a reflection of the delay in registering deaths.

What these figures clearly show is that we have not had excessive deaths in Ireland this year. We have had a mild winter followed by a spike of deaths in April (coinciding with the epidemic) 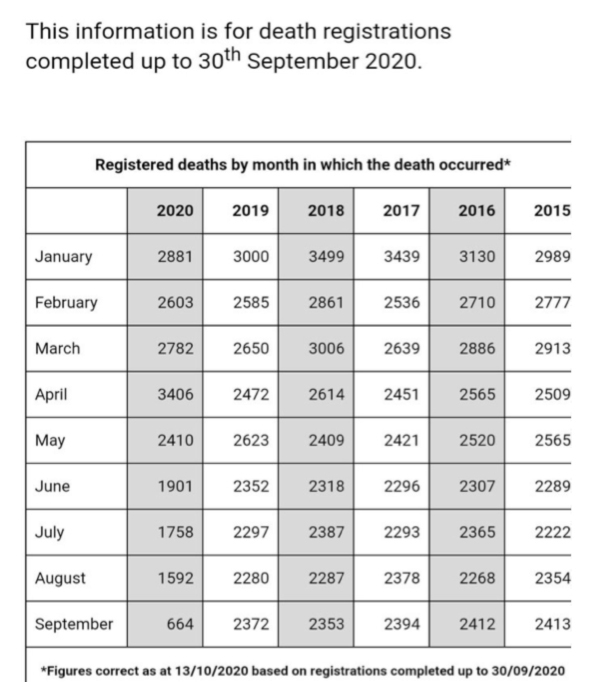 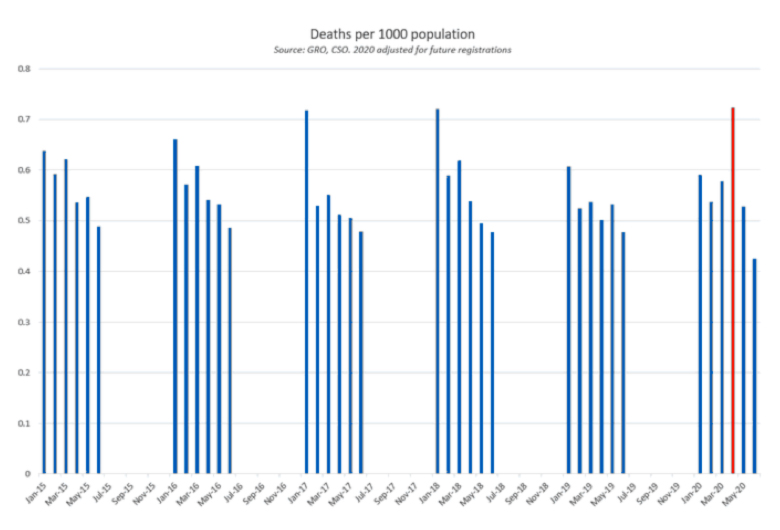 Again, these figures are abundantly clear. Apart from April, we are not experiencing above average numbers of deaths in Ireland. The continued lockdown is unjustified.

There is mounting evidence that the lockdown will have a higher death toll than Covid will. There will also be a massive collateral cost to the lives of children and adults who have suffered the unnecessary curtailment of social and economic life due to the lockdown.  Because of the lockdown (not just the present level 5 lockdown but the combined experience of the past 7 months) we are beginning to see frightening figures of rises in: domestic abuse, substance abuse, and mental health crises; and a massive fall off in operations, diagnosis, and treatments which inevitably lead to death.

Although we have not had published figures from Ireland we know that in the USA and the UK the effects of the curtailment of health services has led to frightening consequences. On October 20th Whitehouse covid taskforce advisor, Dr. Scott Atlas said that:

“In the US, 46% of the six most common cancers were not diagnosed during the shutdown… These are people who will present to the hospital or their doctor with later stage disease — many of these people will die. 650,000 Americans are on chemotherapy ­— half of them didn’t come in for their chemo because they were afraid.”

“Two-thirds of screenings for cancer were not done; half of childhood immunisations did not get done. 85% of living organ transplants did not get done. 200,000 cases plus of child abuse in the US during the two months of spring school closures were not reported because schools are the number one agency where abuse is noticed. One out of four American young adults, college age, thought of killing themselves in the month of June,” he warned.

“This is the reason to open up [the economy]” he said.

In the UK, the Mail reported that “2,300 cancer diagnoses are being missed each week because patients are not going to see their GP, or because they are not being referred for urgent tests and scans at hospital.”

Oncologist, Dr. Karol Sikora, a signatory of the Great Barrington declaration, reported that he was seeing 75% less cancer referrals since the covid outbreak. In April, he estimated that, because of missed diagnoses, there would be 50,000 excess cancer deaths in the coming years in Britain.

The costs of the simple-minded dichotomy that was forced on us – a choice to protect either health or wealth – are coming home to roost, and we will be paying this bill for years to come.

Similarly the enormous costs of shutting down the economy will dawn on people eventually as it becomes apparent that they have no jobs to return to, and the furlough payments can’t keep coming when there are no tax payers to pay them. The health versus wealth question will be moot if there is no money to fund a health service.

The worst thing is this may all be for nothing. What the death tolls in Ireland are telling us now is that there has been no more deaths than expected this year. That might sound counterintuitive as we have a death count of 1865 deaths with Covid, but the plain fact is that the average level of deaths is not markedly different to other years. There has not been an unprecedented die off of plague victims. The deaths that we counted as Covid deaths this year were overwhelmingly of the morbidly ill who would have, sadly it must be said, passed away over the same period from some other morbidity.

For an experiment, take out the Covid deaths from the year to date deaths, and see how the numbers compare to the past five years over the same period.

Neary provides the graph (January – June) which clearly shows that something is wrong. 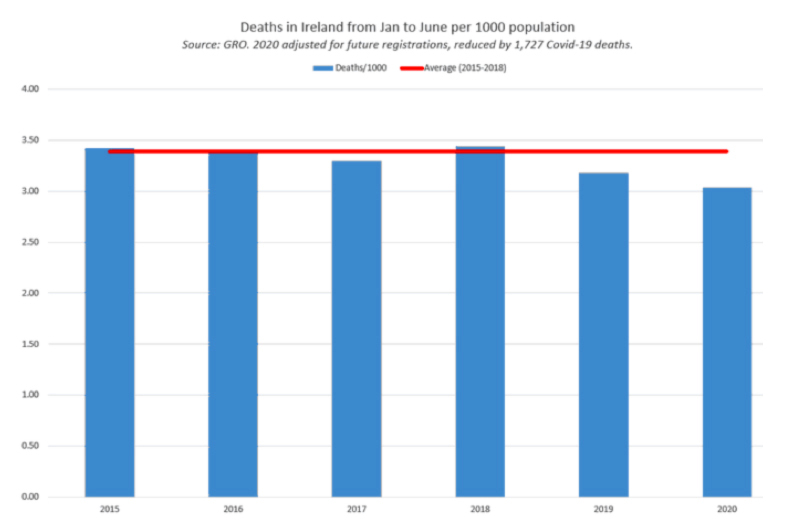 Compare this to an unadjusted (covid deaths left in) graph and it becomes clear that Covid mortalities are part of the expected mortalities.

The unintended (and very foreseeable) consequence of the lockdown though is that we have built up a massive health problem for the coming years. The damage to the economy will also contribute to this health problem as people face poverty and the stress of unemployment and lost income. It’s worth repeating: we will be seeing excess deaths in the coming years not because of the virus, but because of the response. And the longer the lockdown continues, the worse this will be.

When Donald Trump posited back in March that the cure to the pandemic might be worse than the disease, he inadvertently started a reactionary response from the left (which has been copied around the globe), whose main concern in life seems to be to do the opposite of Trump. If Trump said lockdown, they would have said never (in fact they said his original lockdown measure was zenophobic).

We have asked on these pages before what the exit strategy for the covid response was? We are still waiting for an answer, though some might answer that it is to quarantine until we can find a vaccine.

This unfortunately is not such a great plan.

Dr. Mike Yeadon, a former chief scientific officer, allergy and respiratory research at pharmaceutical giant Pfizer doesn’t seem to think so. He said: “Flu vaccines help a little, but on only three occasions in the last decade did vaccination reach 50% effectiveness. They’re good, but they’ve never been magic bullets for respiratory viruses.”

Like other experts at the time, Dr. Yeadon was supportive of the first lockdown because there was relatively little known about the disease, but he has written critically of the policies of government since. He said that: “lockdown made no difference at all to the spread of the virus. There isn’t any controversy about this fact, easily demonstrated, but I’m aware some people like to pretend it was lockdown that turned the pandemic, perhaps to justify the extraordinary price we have all paid to do it.”