Green TD who negotiated Programme for Government: “It doesn’t make much sense” 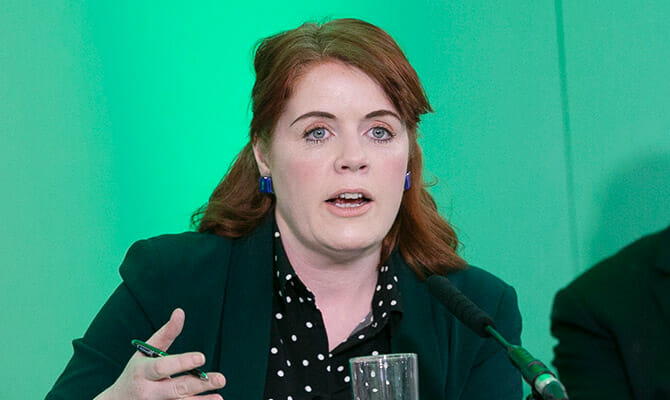 “It really doesn’t make any sense”, says Green TD Neasa Hourigan, of the economic programme which she negotiated:

Green party TD @neasa_neasa on why she abstained on vote for programme for government and her concerns over the deal #TonightVMTV pic.twitter.com/LKng5V6GpK

She is right, of course, though you wouldn’t know it to read the coverage in the newspapers. The Government her party leader wants to join is committed to ratcheting up spending and cutting taxes. You don’t have to be an economist to know that if you spend more money, and take in less, you’re going to have to make up the difference by borrowing.

Her other criticism of the programme for Government, on emissions, is something we touched upon yesterday, in an article about how the Greens were effectively conned. Here she is, basically admitting it:

'I think that's problematic' @neasa_neasa on concerns over climate emissions in the programme for government#TonightVMTV pic.twitter.com/Lk49IHiX3U

You do not have to be an economics graduate to read through the programme for government and come to the conclusion that the sums don’t add up, either on climate change or anything else. As Hourigan herself says in the first clip above, basically none of the proposals in it have been costed, and the only firm promises on revenue have been extracted by Fine Gael, in the form of a ban on increasing income taxes. There are also specific pledges for a tax cut for those earning more than €100,000, and an increase in the Carbon Tax.

But the Carbon Tax, of course, is not designed to raise any revenue. The whole point of it is to get people to change their behaviours, and to consume less petrol and home heating oil, and those sorts of things. If the Carbon Tax is raising money, then it’s not working. And besides, even then, it’s not going to raise enough to pay for all the goodies in the PfG.

The problem isn’t even that the document makes huge spending commitments and promises no tax increases – some on the left would say that borrowing, in these circumstances, is fine and dandy. No, the problem is that it makes these promises while also promising to cut the deficit every year. Here’s what it says on page 23, for example:

As the economy returns to growth and employment growth is restored, the deficit will be reduced year on year to underpin the sustainability of the public finances.

The caveat about “the economy returning to growth” shouldn’t provide much comfort, since most economists expect that to happen before the end of this calendar year.

The problem, for the Greens, then, is that nearly all of their secured spending promises are contingent on the economic promises made in the Government. You can have all these goodies, the document says, but only if we can afford them. And our main economic priority is cutting the deficit.

That tension in the document is basically unresolvable. And it means that if the Greens do enter Government, they’ll find it very hard to do anything meaningful at all.

No wonder, then, that the rest of the media aren’t paying much attention to it.

New instruction from HSE: You should be having phone and internet sex