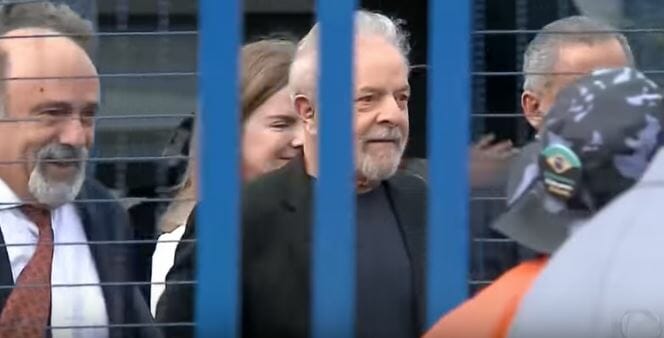 Former Brazilian president Lula’s release from jail last week shows how the establishment seems to always find a way, no matter how serious the consequences for society might be, to protect their favourites. Lula was found guilty of accepting bribes from an engineering firm to help in winning contracts with the state oil company, Petrobras. In April 2018, he started to serve his 12 years term. Why is he already out?

Because Lula is a lucky man: two judges in the Supreme Court changed their minds about their own ruling on the possibility of imprisonment before appeals are exhausted. In 2016, they decided that criminals could be incarcerated after being convicted by a court of second instance. In 2017, Lula was found guilty of passive corruption and money laundering by then judge of first instance, Sergio Moro. In 2018, the sentence was confirmed and extended from 9 to 12 years by the Federal Regional Court of the 4a Region. Lula was then imprisoned, although still appealing.

Last month, the president of the Supreme Court, judge Dias Toffoli, convened his colleagues to vote on the issue again. This time, Dias Toffoli and judge Gilmar Mendes ruled that, contrary to what they thought in 2016, convicted criminals can only go to jail after all the appeals are exhausted. With the best interests of the law-abiding community in their hearts, these two judges decided to undo what they had done and Lula was free the very next day.

Dias Toffoli worked for Lula’s Workers Party as a lawyer before being appointed to the Court by Lula in 2009. Gilmar Mendes is friends with people like former president Michel Temer and former presidential candidate Aécio Neves, who with Lula are among the many politicians implicated in malfeasances in Petrobras and other state companies under investigation by Operation Car Wash, carried out by public prosecutors and the Federal Police.

In his 2016 vote, Gilmar Mendes stressed that allowing imprisonment after the sentencing by a court of second instance would get Brazil closer to the judicial practice of civilised countries and help to undermine the prevalence of impunity. We can only wonder what motivated his revisionism.

Last Friday, the day after the Supreme Court decision, Lula was already on stage urging his supporters to emulate protesters in Chile and take to the streets to overthrow president Jair Bolsonaro. “We’ll only save this country if we have the courage to do a little more”, he said in a rally in São Paulo. At least 20 people have been killed and around 2,000 arrested in Chile since street protests against Sebastián Piñera’s government began last month.

Under Brazilian law, Lula cannot run in the next presidential election due to his second instance conviction. But he promised to lead the left in their crippling of Jair Bolsonaro’s administration. “If we manage to work right, in 2022 the left Bolsonaro is so afraid of will defeat the ultra right”, he said, adding that his comrades must take action both in Parliament and the streets. “Our representatives will have to become lions in the Congress… We have to follow the example of the people in Chile and Bolivia. To fight, to attack, and not only to defend ourselves”.

Following Lula’s release, Bolsonaro said he would not waste time on a man who “is free but remains a convicted criminal”. However, he suggested that he could avail of the National Security Law depending on how Lula carries on with his exhortations of street insurrection.

The decision that freed Lula also benefited another big shot in the Workers Party caught by Operation Car Wash: José Dirceu, Lula’s former Chief of Staff, found guilty of participation in organised crime, money laundering and passive corruption. Lula’s right-hand man said after being released last weekend: “The fight now is for us to retake the government of Brazil. And for this we need to make clear what we are: we are the Workers Party, left-wing, and socialists.”

The consequences of the decision by the Supreme Court go further: the highest judges in Brazil have potentially opened up the prisons’ doors for some 190,000 convicted criminals, including murderers, rapists, paedophiles, and all but enshrined the right to impunity for those with money and clout to delay justice into eternity through legal manoeuvering. But those happy for Lula have not expressed any concerns about that.

Ethicists double down on utilitarian framework for pandemics