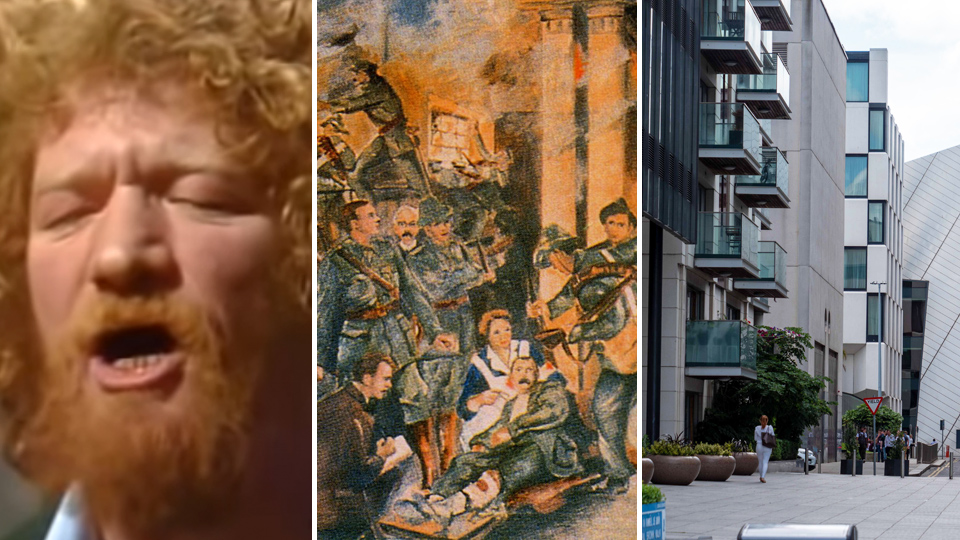 So that wealthy overseas investors could buy up the country?

Luke Kelly wrote a poem some time around the 50th anniversary of the Easter Rising lamenting the failure of the Irish state to implement the Proclamation’s pledge to “secure the right of the people of Ireland to the ownership of Ireland.”

With the exponential growth in foreign ownership of commercial and housing property, one of Luke’s lines has the air of prophecy where he pondered a future:”When we have sold enough of Ireland to be but strangers in it.”

Overseas buyers accounted for over 70% of commercial property acquisitions in 2016 valued at €7 billion. In total foreign property holdings here are now worth more than €300 billion, which is quite staggering and is one of the consequences of the 2008 crash.

A recent piece on the Dubai based Gulf News (July 19) highlighted the benefits for overseas investors in acquiring house property here. Describing Ireland as a “welcoming nation,” it emphasised that “there are no restrictions on non-residents buying property.”

As with others including Irish based property and legal facilitators, Gulf News is clearly pitching towards investors who wish to enter the rental sector rather than buy a home for themselves. It even advises how rental limits in Dublin can be circumvented by “refurbishing units and being able to prove their investment.”

The implications of all this for Irish people seeking somewhere to live are stark. Home ownership has declined to the lowest level since 1971 when many working families were for the first time able to begin to buy their own home. In 2016, owner occupation accounted for 67.6% of tenure overall, and under 60% in Dublin and some other urban areas.

That trend will continue as things stand as more working people become reliant on renting accommodation. That stood at 17% in 2016 (CSO – Census 2016) with well over half of 21 – 35 year olds now renting. Not only does that restrict their ability to acquire family homes, but the level of rents make even that a precarious situation. Ownership by non nationals including investor and vulture funds drove rents up considerably between 2011 and 2016 – with Dublin rents rocketing by 30%.

Other countries like New Zealand banned the buying of housing by non nationals in 2018. Fianna Fáil – hypocritically given their own comprador history since the 1950s – suggested this as a possible model to be used in order to tackle the housing problem. The then Minister for Housing Eoghan Murphy dismissed this as “unconstitutional” and more tellingly, given our elite’s à la carte approach to Bunreacht na hÉireann, contrary to EU law.

Also interesting was the response of the former nationalist Sinn Féin which opposed any proposal to “ban foreigners,” no doubt reacting in a Pavlovian fashion to the slightest hint of being down on diversity and all. So too did the comic opera Marxists of People for Profit, again no doubt for similar reasons.

As the Irish revolutionaries of a century ago understood, political independence and sovereignty is meaningless unless it guarantees that the needs of the Irish people take precedence over the prerogatives of economic interests that are damaging to the nation and its citizens.

We are surely in such a situation today. Turning that around would require a radical change in the priorities of the Irish state, and its relationship with the EU whose legal framework makes it virtually impossible for any member state to exercise national control over a vast range of critical sectors including property acquisition.

Unless the political will develops here to challenge that, then Luke Kelly’s vision for a deracinated state void of sovereignty and national identity will alas come to be irreversible.