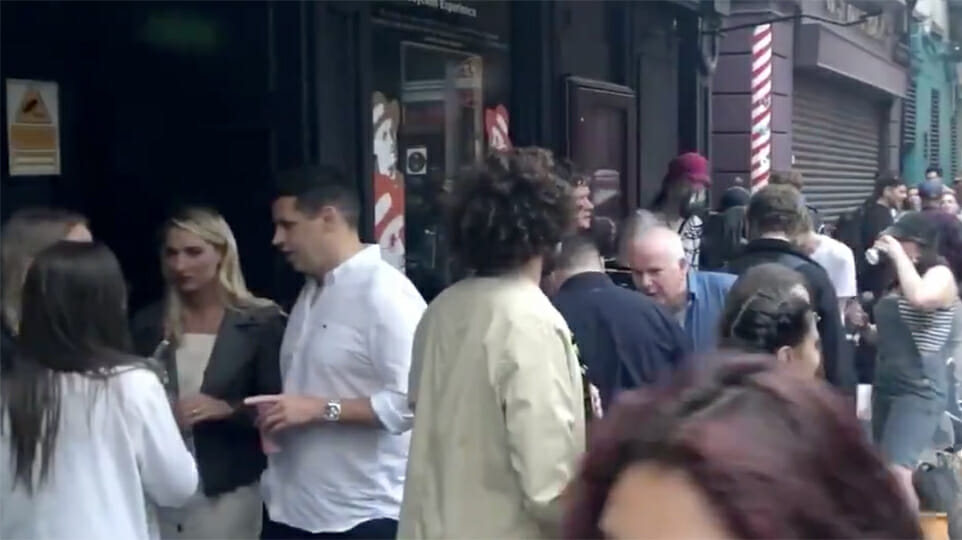 Right now, it feels as if there are two very distinct realities in this country. For a rapidly shrinking number of people, Covid-19 is still being taken seriously.  The press conferences with the Department of Health are being closely watched, social distancing is carefully practised, and the remaining lockdown restrictions are being observed.

Then for a growing number of people life is pretty much like the party scene we saw in Dame Lane at the weekend – definitely a feeling that the panic is over and that Covid has gone away, and that it’s time to let loose again.

Gardai walking around the streets in Dublin City Centre to make sure pubs are not breaking the guidelines on social distancing, serving food or time limits etc

Yet this is allowed on Dame Lane….. pic.twitter.com/4inEgsY2Rm

These two wildly contrasting views are co-existing in a strange sort of coronavirus reality, where most people seem to be quietly ignoring the official organs of the state and getting around whatever restrictions are meant to be enforced.

It’s as if the State is a very strict school principal who addresses the Assembly every morning with severe instructions as to how to behave, but then turns a blind eye when everyone but the school prefects absolutely run amok.

In this case, of course, it didn’t help that the school principal escaped to the Phoenix Park with a bag of cans for a topless picnic the moment the strict lockdown eased slightly.

Let’s be honest, from unscientific observations at least, an awful lot of people have gone back to some kind of normal. Their logic is, I assume, that Covid-19 didn’t turn out to be as deadly as we imagined, that younger people aren’t in any particular danger of being badly impacted by the disease, and (most of all) they are tired of sitting at home and missing out on having a buzz.

The beaches have been crowded since the end of May, and the usual crowds of teenagers are more visible than ever since lots of their indoor haunts are still closed, and almost no-one is wearing a mask. I’m not saying that’s the right way to behave, simply that it’s what’s happening.

It would be a mistake, however, to confuse the revellers in Dame Lane and elsewhere with a public or principled stand against a lockdown that some believe might be doing more harm than good. These people just want to party, and to hell with the consequences. They’re not at risk so they don’t care, and having a blast is more important than a second surge of the virus or the harm that might cause.

It’s easy to chalk to this up to selfishness and arrogance, but the example shown by political leaders has undoubtedly contributed to the lackadaisical attitude towards social distancing, or at very least to the hypocrisy of telling people how to behave and then acting as if its  one rule for the plebs and one for the elite.

There was Leo in the Pheonix Park, and Bill Kelleher forgetting to quarantine, and then last week the entire Sinn Féin party or so it seemed, crowding out a funeral in West Belfast. Why would anyone take these people seriously, or believe that they must to stick to the rules when this sort of hypocrisy abounds?

It’s understandable that people are sick of lockdown and of the lack of human contact. Sometimes, even when no alcohol is involved, it’s easy to forget and give an impulsive hug or a squeeze of the hand. As the fear of what Covid might bring lifts so does people’s commitment to maintaining social distancing. That’s human nature. People wanted us to behave like new Zealand when the danger seemed imminent, but they’re now all for the Sweden model when it seems the panic might be over.

This is all very tough for people who have lost loved ones to Covid-19 to take, and the anger being expressed by bereaved families and by healthcare workers at the parties and revellers is understandable. But right now, it feels like schools out for the summer and that no-one is really in charge.