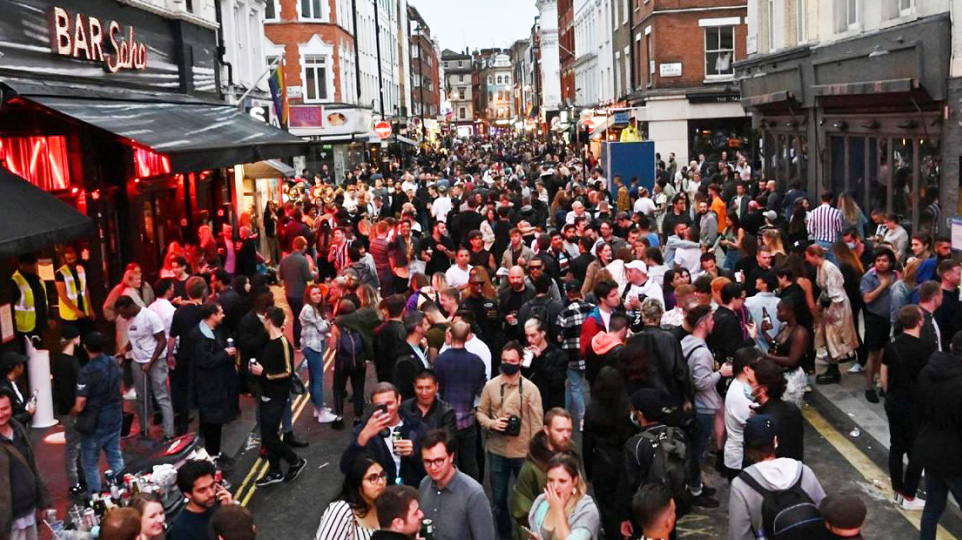 It’s tempting to say that London, in the video below, is “getting back to normal”. But that’s not quite right, is it?

It’s standing room only in Soho this evening. A carnival atmosphere.

“This is London,” one man tells me. pic.twitter.com/KdeqvQCaFN

For one thing, though the United Kingdom is many months ahead of where Ireland is at (and, if the zero Covid people get their way, many years ahead of where we are at), life still hasn’t returned fully to normal. These people are partying in the street because, well, indoor partying is still verboten under this phase of the UK’s great re-opening plan. It’ll be later in the summer before the revelry moves indoors.

For another thing, though, were these kinds of scenes ever truly normal, even in Soho, on a Monday night? It’s doubtful.

What you’re seeing there, most likely, is an outpouring of relief and joy. New Social Democrat signing Colette Browne summed it up nicely, for my money: “VE Day”, she tweeted:

VE day, of course, was celebrated after the surrender of the Germans in World War Two. Then, as now, people who had had basically no kind of normal life for six long years poured into the streets to drink and party and celebrate the end of a lengthy period of sacrifice and suffering and lost lives. Without having lived through VE day, it’s hard to say how similar this is, but it sure feels similar.

All accomplished, of course, with the Astrazenica vaccine. About half of the UK’s vaccinations have been the Astra jab – the other half have been Pfizer. On the day that the UK opened up, Ireland suspended the Astra jab for pretty much everybody. There, now, is a study in contrasts.

Of course, these scenes should give us hope. Not just because the Irish Government will get us there someday itself, but because these scenes will make it much harder for them to delay. Irish people might be unwilling to take a chance on the Texans or the Floridians or the Swedes being right, but the sight of the bloody British getting more freedoms than we have will light a fire under Irish voters that will be hard to extinguish.

It is not just one day, you see. There are going to be weeks and weeks of this. The party has started in the UK, and you can probably put good money on it lasting for most of the summer. Ireland does not presently plan to re-open hospitality until mid-summer at the very earliest, and NPHET are said to be privately shaky even about that. Ireland closed while Britain parties is a recipe for political pressure like we have not seen to date.

And of course, it’s just mainland Britain for now. What about Northern Ireland? 800,000 people have been vaccinated up there, and unionism, at least, won’t be very keen to keep the place closed to convenience the Dublin Government’s slow-coach approach to re-opening. At some point in the next few months, the Irish Government will face the problem situation where Irish people can’t go to the pub in Dublin, but can go to one in Newry or Armagh or Belfast. When that happens, they’re going to make an absolute fortune at the M1 toll plaza.

Boris Johnson lifted the worst of Britain’s lockdown yesterday. But he did more than that: Though they’ll never be able to admit it, he also set the clock ticking on Ireland’s lockdown, and the Dublin Government is going to have to act, before the people act for it.

Making sense of the assault on Capitol Hill