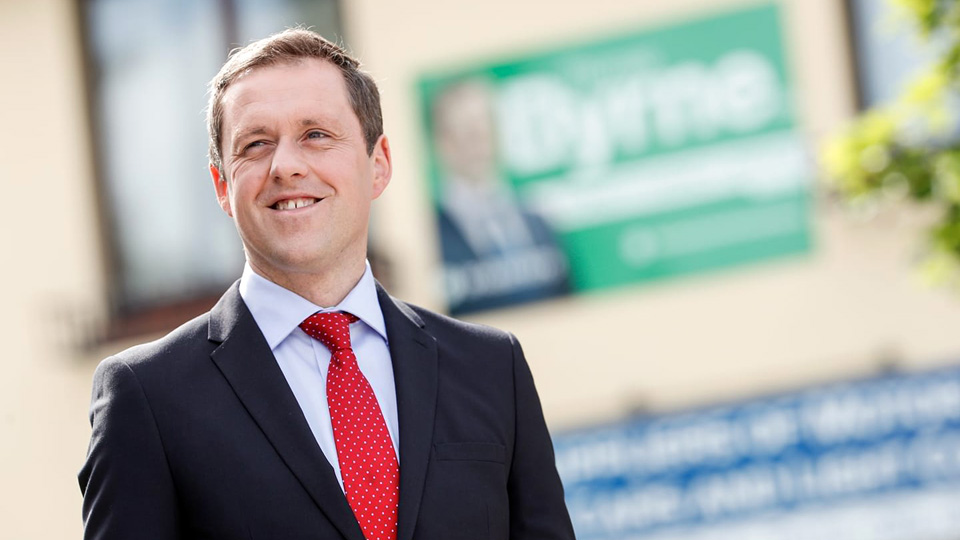 Last night, the Minister for European Affairs, Thomas Byrne, went on the Tonight Show on Virgin Media to defend Barry Cowen, the Minister for Agriculture, after the stories in recent days about Cowen’s drink driving offence four years ago, and absence of a full driving licence.

While Byrne was on the programme, Ken McFadden, a long-standing Fianna Fáil activist, released this statement:

Thomas Byrne told me in a phone call at 1.30am in the morning the night the cabinet was formed he gave the #BarryCowen story to the media, he was bitter at not making cabinet, that is the 100% truth & I will swear it on a bible in any court, Thomas Byrne is a liar #TonightVMTV

McFadden is not just an ordinary FF activist, incidentally. He has been close to Thomas Byrne for years, and worked very closely on all of Byrne’s election campaigns. If Thomas Byrne was likely to be phoning anyone at 1.30am to complain about not getting a cabinet seat, McFadden would be high on the list of people you’d expect him to be calling.

McFadden’s claim about Byrne, if it is untrue, is horrendously libellous and defamatory. Which means: It’s gotta be true, right? Why would anybody expose themselves to the expenses and stress of a certain defamation case if they didn’t 100% have the evidence? It’s also not hard to prove whether he received a call from Byrne at 1.30 on the night in question, since phones these days save logs of all calls.

And of course, if Byrne were to sue him, that would mean that all of Byrne’s communications would be discoverable as part of any law suit. In other words, for those of you unfamiliar with the process, Byrne would have to provide his own phone records for the period in question. And what journalists’ phone numbers would show up then?

McFadden is not the only one with a story to tell about Byrne either: Here’s former FF councillor Jennifer Cuffe:

@ThomasByrneTD should be very careful with his phone calls. I previously heard him denigrate me over bluetooth in a TDs car. This included calling me a “slut” and “whore”. Not nice. He should be careful who is listening 🤗 https://t.co/ymDQJODRcw

Let me break journalistic impartiality here to say something: Jennifer Cuffe and this writer have had a very close mutual friend for years, and, in the parlance of the moment, I believe her.

So how can Byrne continue in office? He’s the Minister for Europe. Cowen is the Minister for Agriculture. There might be no two ministers in the Government, aside from Finance and Public Expenditure, who work more closely together, given the importance of CAP funding to the agri sector.

And what is the alleged motive here? It seems to be that Byrne is accused of leaking the information about Cowen for no other reason other than that he was upset not to be in the cabinet himself. “I didn’t get a job, so screw you”. Additionally, Byrne may have been frustrated about the appointment of Louth’s Erin McGeehan to the Seanad by Micheal Martin, since it makes it much less likely that Byrne’s own brother will get the FF nomination there next time out. Fianna Fáil – a family at war.

One of two things is true here: Either the Minister for Europe is himself the victim of the most despicable smear by one of his longest standing friends and colleagues, or the Minister for Europe has been revealed as a terrible snake. He went on television last night, remember, to defend Cowen, after – allegedly – being the person who stuck the knife in Cowen’s back in the first place.

Either way, not a great start for Fianna Fail in Government.

Is it too early in the day for popcorn?