Eriugena: The great Irish scholar who held back the darkness as European culture came under siege 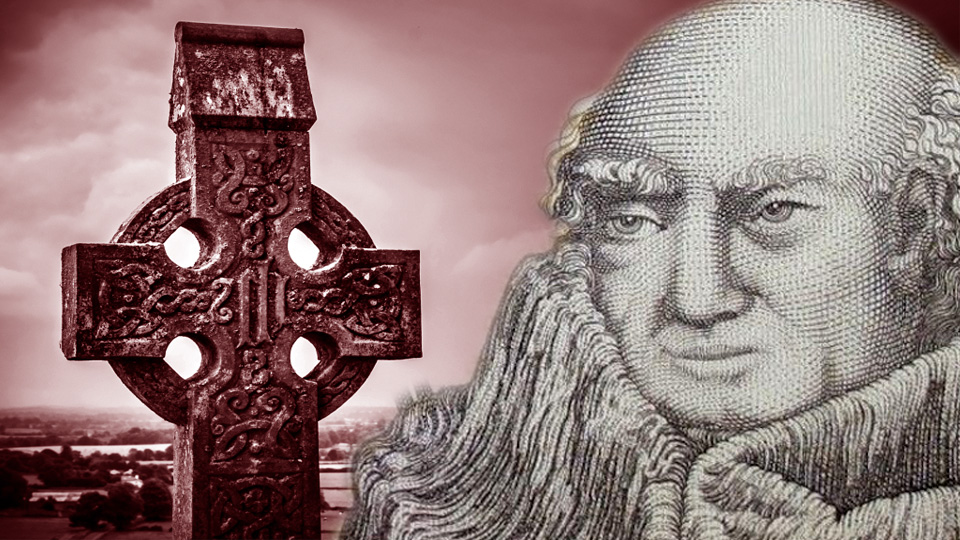 One of the most intriguing and enigmatic of great Irish people is a man only known to us as Iohannis Scotti, or Eriugena. Both names merely signify that he was Irish, his real name or what part of Ireland he was born in, are a mystery.

He was born here sometime between 800 and 825AD and his Irish nationality is confirmed not just by the name by which he was known, but the fact that he used Gaelic script in his glosses on his manuscripts.

He may, given that the 9th century was a time of Viking raids and settlements around the coast, have fled to Europe as a consequence, but there is no evidence of that. What we do know is that he was one of a succession of Irish people to have become part of the rich Christian culture that helped to sustain European culture at a time of great trauma.

The ahistorical term ‘Dark Ages’ is still applied to the time of Eriugena, but it has no veracity in terms of the pejorative manner it came to be used in later times. As one of the foremost Eriugena scholars, Deirdre Carbine has stated, the Carolingian era was “a bright period in the history of Western philosophy and culture”.

Even Bertrand Russell in A History of Western Philosophy, while lazily referring to the dark ages having “descended on Europe,” notes the part played by Eriugena and other Irish missionaries in preserving the culture for several hundred years. It is generally recognised now that the foundations of science and learning were maintained and strengthened during the Early Middle Ages, rather than Christianity having been some sort of impediment to “progress.”

What darkness did befall Europe was a consequence of the encroachments of more primitive peoples which threatened the survival of a literate culture based on values that are once again under threat. The invading tribal peoples, while sometimes romanticised as prelapsarian eco socialists, were by and large illiterate and governed by rapacious brutality.

It was the resilience of western Christian literate culture, and indeed in the east of Buddhist and Hindu monasticism and social mores, that eventually subdued the barbarians, although the Mongols, Vikings and Huns destroyed monasteries and libraries. It is no accident that contemporary barbarianism as manifested in actual totalitarian power, or in the nihilism of the aspirant totalitarian left in the west, likewise targets all manifestations of the great world cultures.

Eriugena was particularly valued as one of the foremost western experts on Greek philosophy which through Platonism had a major influence on Christian thinking. Eriugena’s erudition earned him the place of tutor to the court of Charles the Bald, the grandson of Charlemagne. Even though he may not have received Holy Orders, he was a key influence on the hierarchy and regarded as the preeminent intellectual of his time.

For that reason he was chosen to put the case for free will in a controversy with a Saxon monk Gottschalk who was inclined to what would later become the austere Calvinist position on predestination. Eriugena stated that evil was of a person’s own making and that no-one was pre-ordained as part of an Elect or a Damned.

In his Treatise on Divine Predestination, Eriugena made the fundamental point that still distinguishes the doctrine of freedom from all philosophical schools that place humans as the subjects of material forces beyond their control: “Where there is inevitability, there is no (free) will … No cause constrains man to lead a good or a bad life.” 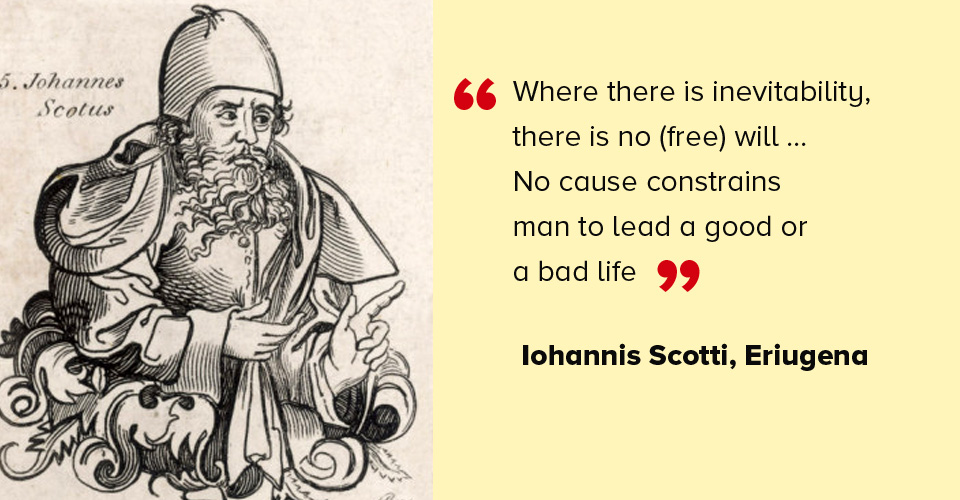 That remains a central issue in all human thought, regardless of whether the denial of free will is couched in religious or in materialist terms. The Yugoslav Communist dissident Milovan Djilas compared the stifling consequences of that found in Calvin’s Geneva to the control of the intellect in the socialist states.

Both were characterised by “dogmatic exclusiveness” which the Serbian poet Jovan Ducic claimed “made paralytics forever incapable of joy.” In contrast, Mary Brennan wrote of the “extraordinarily optimistic” view of human possibility found in Eriugena, based on the concept of Fallen humanity using its reason and capacity to overcome its own flaws, and to restore its own true nature.

To what extent Eriugena brought that from his upbringing in Irish Christianity and learning must remain speculative. Unfortunately much of the written legacy of that time was lost through the succeeding centuries of invasion and cultural assault. Ironically, some of the most valuable artefacts only survived by having been brought to Europe by the missionaries.

It is tempting to see the peregrinations of the Irish into Europe up to and after Eriugena’s time as akin to those of the Zen monks who seem to have held a similar view of the Cosmos and our place in it. As Christopher Bamford said of Columbanus and of the others, “Thus the Celtic traditions of individuality, holiness and learning became part of the European inheritance.”

In his Homily of the Prologue to the Gospel of St. John, Eriguena posited a view of creation that in later times would cast suspicion on him as a heretic. He was accused of pantheism by some. What he was proposing was that all of creation is part of the Creator. All things were present in the Creation, and inseparable from it. “Contemplate how an infinite number of lines may subsist in a single point”.

Far from that speaking of some abstract mysticism, it serves as an analogy for what we now believe we know of the act of creation, in the singularity popularly termed the Big Bang. As indeed was recognised from his study of astronomical observations in 1927 by the Belgian Jesuit Fr. Georges Lemaitre who formulated the theory.

(Not only did this prove to be a massive shock to materialist cosmology, but where atheistic materialism was in power in the Soviet Union, Stalin’s cultural enforcer Andrei Zhdanov denounced Big Bang, as well as quantum physics, as a “reactionary fairy tale” Those same reds who still become lachrymose over Galileo who was physically unharmed, blithely ignore the thousands of scientists murdered and sent to the camps by the socialist obscurantists.)

Eriugena’s greatest work was his Periphyseon – On the Division of Nature. It is an epic work, one of the great books not only of Christian but of medieval philosophy. It is an extraordinary achievement, and earned Eriugena the ultimate tribute from the Irish state of having his image placed on the old £5 note. 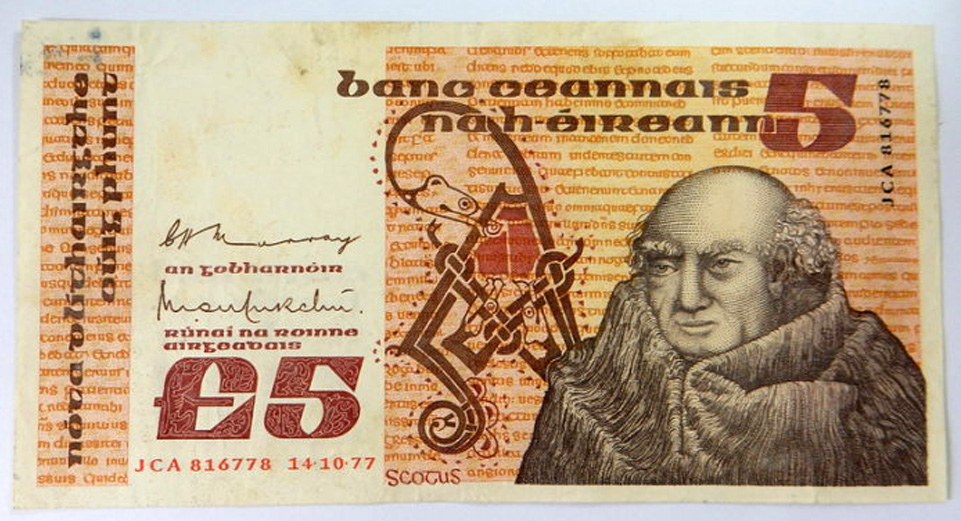 For centuries, Periphyseon was forgotten, and for a time placed on the index of prohibited books. The Sheldon-Williams translation into English was expensive and difficult to obtain. The library in Trinity College had a copy, and since 2020 it is now available in paperback published by Dumbarton Oaks. It is one of those books that can be justly described as making the reader look at the Universe in a totally different way.

In the book, Eriugena through a dialogue between the Nutritor and Alumnus cites a vast array of scriptural and philosophical sources in support of his depiction of Creation. It is too big an enterprise to do justice to here, but its most impressive aspect is the depiction of Creation as a process of Exit and Return; All things have the same origin or cause, and all things will have the same end.

Contrary to those simplistic atheists who ask profound questions like “How did God create everything in one week,” Eriugena in common with other Christian philosophers stresses the allegorical nature of scripture. The Bible describes the act of creation in ways that were meant to be comprehensible, but as Eriugena said, are beyond understanding, because we cannot know the mind of the Creator. Creation is the “manifestation of the hidden.” 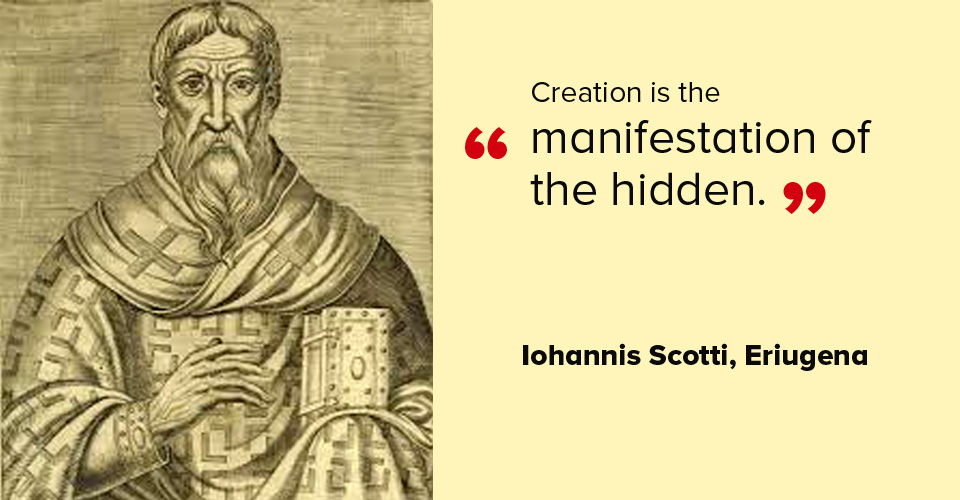 That is why crude materialism rebelled against the scientific evidence of what seems to have been the origin of the Universe. It has attempted to adjust itself to what science seems to know of that origin, which involves an act of creation of some sort no matter how it is dressed up. What Roger Scruton said of crude Biblical creationists is equally true of crude materialism. Each constitutes a “formula for translating the unexplained into the inexplicable.” The American psychedelic Terence McKenna once posed the dilemma of materialist science as “Give us one free miracle and we’ll explain the rest.”

Eriugena explores the nature of the Fall, and humanity and indeed all of Creation’s path of return through reason and understanding to its origin. Again, something that gels with theories of how not only the Universe came into being, but how it might end in another single event. There is also the hint that all of this takes place in some sort of dimension beyond time in which our material existence is illusory. It is not difficult to see why James Joyce was fascinated by Eriugena.

To return to the older culture from which Eriugena came, it is noteworthy that the early Christian accounts describe a society that was far from being the primitive communist paradise sometimes still mythologised by those following Connolly’s and other’s depiction of Celtic society. St. Brigid, for example, was born into slavery and her life illustrates how Christianity enhanced rather than suppressed the life affirming qualities of our people. As it did in replacing the barbarities of earlier cultures in Europe and elsewhere.

That is important in rejecting the cult of primitivism which goes back to Rousseau’s notion that pre-Christian, pre-civilized man was some sort of innocent unblemished by the taint of social order. The logic of that of course, as put into practise by the Jacobins inspired by Rousseau and all subsequent totalitarians, was that this “noble savagery” could be recreated “on a higher level” through egalitarianism.

Instead, as Eriugena and others have shown, human nature as it is in its fallen state is flawed. As such it is incapable on its own of creating an ideal society. Rather, the Return as described in Periphyseon, involves the use of human reason to create an order that will facilitate that Return to the Creator from which it originated. 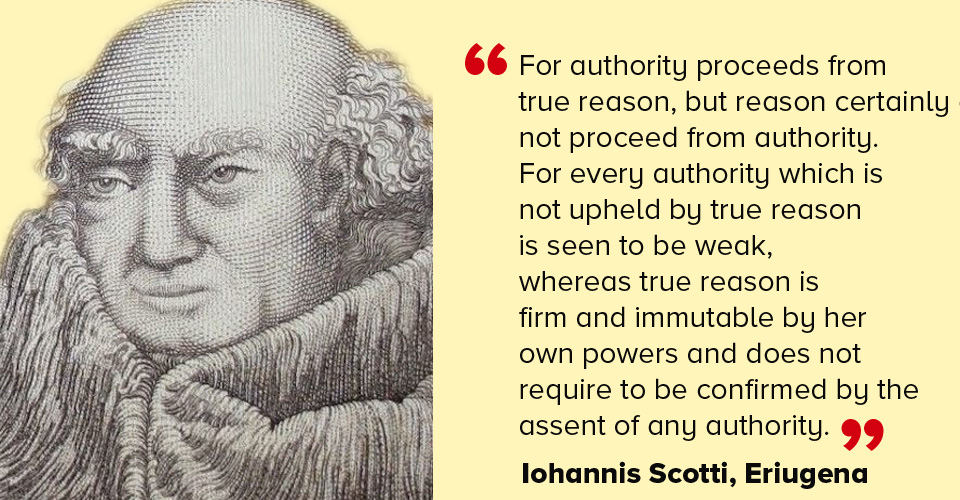 Whether a person is religious or not, or what spiritual understanding they have of our place in the Universe, Periphyseon addresses fundamental questions of existence. Christian existentialism as it were. It certainly stands as one of the greatest contributions of Ireland to world thought, and stands the test of time in a way that few works of such vintage do.

Perhaps though, the most endearing relic of Eriugena’s time is the poem Pangur Bán written by another Irish Christian scholar at the Benedictine monastery of Reichenau while Eriugena was buried in his manuscripts several hundred miles to the west.

So in peace our task we ply,
Pangur Ban, my cat, and I;
In our arts we find our bliss,
I have mine and he has his.

Practice every day has made
Pangur perfect in his trade;
I get wisdom day and night
Turning darkness into light.

We may be proud of Eriugena and the poet, perhaps one Sedulius Scottus, who held back the darkness. Especially at a time when darkness may be falling once more.

Dumbarton Oaks Books have published recently the only complete English translation of Eriugena’s magnum opus. It is available to buy here