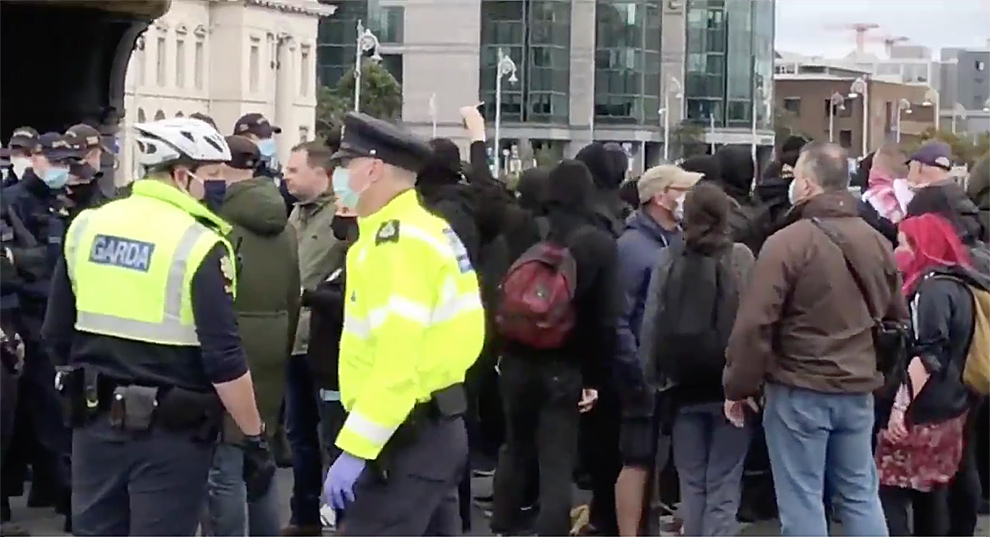 If reports are to be credited, British intelligence appears to have successfully moved against one of the aspirant IRAs – namely those claimed to be in the New IRA and those in the left-wing grouping, Saoradh.

The scuttlebutt is that MI5 recruited a leading member of the organisation in question who embarrassingly it would seem managed to obtain not only audio but video recordings of meetings of its leadership. It would appear that the recordings are to supply one of the key elements in charges against those arrested over the past number of days. Seven of those have so far been charged.

The alleged “supergrass” has been named on several social media forums along with his photograph. It would seem that he was a former member of Sinn Féin and was one of those who worked on their internet sites and media. He was involved with the party in Antrim from the early 2000s and when complaints were made about him, people were told that he not only represented SF, but the “whole republican movement.” Indeed.

He was also involved for a time as secretary with a group called Justice Watch which styled itself as a human rights NGO. He also apparently owned a takeaway and a bar in Belfast while involved with Saoradh. Which tells its own story.

A number of things are worth pondering in relation to all of this, not least for those persuaded that a revival of armed struggle might be a good thing. Firstly, it proves once again how easy it is for the intelligence services to infiltrate and manipulate secret organisations.

Without dabbling in the more extreme conspiracy theories regarding the demise of the Provos, it is clear that the IRA was penetrated at all levels and that this played a probably not inconsiderable part in its surrender, disarmament and disbandment. Which you might think would motivate others in questioning the point of attempting to create a retro Provos.

Whatever the intelligence and counter-insurgency aspects of the demise of the IRA, the decision to end the armed campaign was the correct one. It had long since ceased to be a plausible path towards a British withdrawal and the ongoing deaths, imprisonments and collateral damage were pretty much for nothing by the early 1990s.

So calling it off was the correct move. The politics of what followed are a different matter. Certainly, few republicans who supported the ceasefires could have envisaged that Sinn Féin would follow the military capitulation with the acceptance of Partition, and a role in administering the British controlled part of Ireland.

Along with that in short order came the abandonment of any pretence to be a movement standing for the sovereign independence of Ireland. Or having a plausible strategy to bring that about. The acceptance of the EU’s control over vast areas of Irish life is one consequence. The other is the headlong embrace of the mindless liberalism that will if successful make any project for national sovereignty meaningless, even in the unlikely event of it being formally ratified at some stage in the future.

So there is certainly an intellectual and historical argument against the direction which the republican movement in the main has taken over the past 25 years. There is none for reviving a failed armed campaign, which in any event is counter-productive when it does splutter into occasional life. More pointless deaths and more men and women doing jail time when they might be devoting their energies to something more productive.

The politics behind all of this are pathetic. I have seen leading members discussing Maoism. Apart from that nonsense, there is the usual left republican obsession with the past. Connolly for Dummies based on de-contextualised quotes from something written over a century ago. As though any of this has the slightest relevance to Ireland today. Like the Bourbons, they have forgotten nothing, and learned nothing.

It is surely ironic too that one of the political manifestations of the group in question, Saoradh, has been to turn out in support of Irish government ministers to clamp down on free-speech. They joined with the usual Pollyanna NGOs, professional lefties and antifa soccer casuals in support of Charlie Flanagan’s proposed “hate” legislation in a demonstration against free speech at the Dáil.

Of course, once their presence was highlighted, the Care Bears were appalled given Saoradh’s investigation by the PSNI following the killing of Lyra McKee in April 2019. Now the same state on whose side Saoradh is standing “objectively” (Marxists love that word) is doing its best to destroy them. That’s the thanks you get for “confronting the far right” it would seem.

It’s curious to see Saoradh joining with Antifa to try to attack people taking part in anti-lockdown rallies or demonstrations.  Surely those demonstrators are ‘anti-establishment’? Does that make Saoradh ‘stooges of the state’, or some such phrase they would use to describe others? Or is this more of the M15 directing operations? Who knows.

Anyone familiar with the Dublin Fenians in the 1880s and 1890s will see some echoes in the current predicament of conspiratorial armed republicanism. As the land reforms and seeming success of the Irish Party at Westminister in advancing Home Rule took hold, some in the Irish Republican Brotherhood were reduced to squabbling factions, led by the nose through Special Branch into bombing schemes and occasionally murdering one another over money and allegations of informing.

Meanwhile the coming revolution was being shaped by those who in a period of political becalment were working through the cultural organisations to re-assert a national consciousness that was under threat of extinction.

The more far-sighted among the Fenians eschewed the plotting in dingy bars for the practical work within the GAA, the Gaelic League, national minded newspapers, and economic co-operation. It was this which laid the basis for what freedoms were won after 1916.

We arguably face a similar period now, as the forces inimical to our culture and sovereignty as a people have the upper hand. Those who think it can all be solved by kindergarden ultra leftism allied to an intermittent “armed struggle” are clearly part of the problem, not the solution.