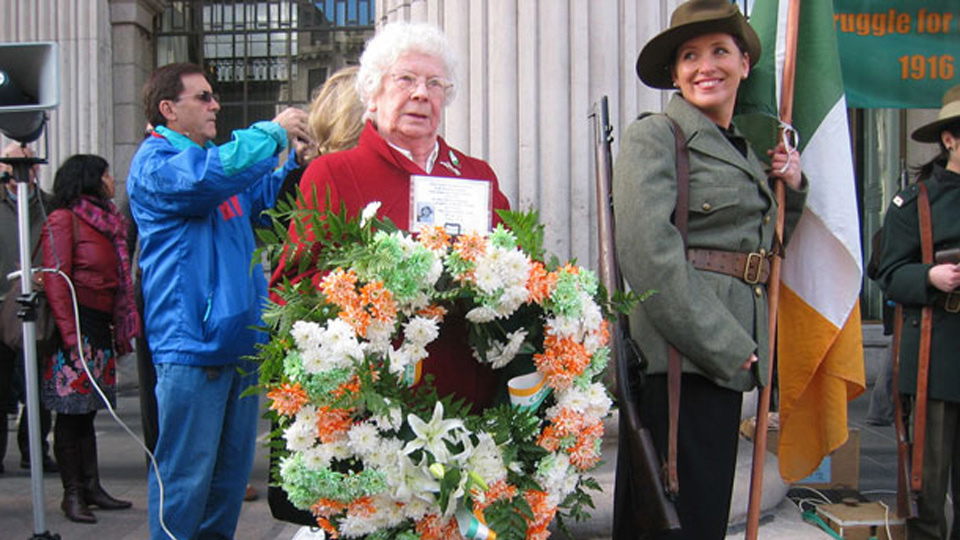 Easter is perhaps the most important time of the year to remember those who fought for our freedom, and by commemorating the past, we look forward to the future. We celebrate the various battles in the fight for Irish Freedom and recall with pride the ultimate price paid by many of those involved. For Christians, Easter is also of course a time where they celebrate the death and resurrection of Christ.  It was to those events over two thousand years ago that Pearse and the other leaders looked when preparing for their rising – they saw that the sacrifice they would make would be used to create the climate for the ultimate freedom of Ireland.

I am both honoured and proud to be a member of one of that small group of Republicans who can trace their lineage back to those historic times, my maternal grandparents were amongst the hundreds of men and women who took part in armed insurrection to obtain our freedom. My grandfather Michael Murphy was in the Irish Volunteers, and my grandmother Martha O’Kelly was a founding member of both the Irish Citizen Army and Cumann na mBan. Both served in the GPO garrison, Michael in the GPO, and Martha in the Imperial Hotel.

One of those injured in the Rising was Paddy Mahon, who was wounded in Talbot Street and tended to by Martha who had received Red Cross training from Dr. Kathleen Lynn. My grandparents were married in 1917 (after arrest and detention for their part in the Rising) having been introduced by Paddy who was Michael’s best friend. He was the best man at their wedding.

Both were active in the defence of the Republic from 1918 to 1922 and again defended the Republic in the Counter Revolution. They went on to have 17 children born alive, my mother Marion was the seventh child born in February 1927. Subsequently Martha died in 1943 and Michael in 1950.

Marion like her siblings joined the Republican Movement at an early age, the boys joining Fianna Eireann and the girls joining Clann na nGael, (Clann being reorganised as Cumann na Cailíní) before joining the Army or Cumann ná mBán at the appropriate age.

As a young teenager she was active in the 40s, often travelling to Belfast with funds on behalf of Cabhair, the Prisoners Dependants Fund, she was a regular visitor to the Mc Millens and the Cahills both in the Lower Falls area.

Following the death of her parents she was the oldest still at home and it fell to her to look after the rearing of the younger ones, some of whom were very young. Most of her brothers and sisters who were still at home at the time were involved, with the republican movement. Bertie ended up interned in the Curragh while Eamonn was jailed in Crumlin Road. During the SOS at Christmas 1956, those volunteers from down the country all ended up in her home in Leinster Avenue, including Sean Sabhat who was to die within a few days of leaving, she often talked of how Seán taught them how to play cards in Irish and also played the violin, she treasured the rosin for his bow which he left behind.

For Marion being an Irish Republican was very clearly about the type of Ireland that would emerge, she believed in the Irish Nation and all that included: our language, dance, games and music. To this end she was involved in the language movement through Conradh na Gaeilge and obtained her gold Fainne from Mairtín Ó Chadhain, she played camogie for the Maurice O’Neill Club, she was an Irish Dancer and loved Irish music. She believed that this Nation was the best in the world, and that Irish culture is superior to anything else anywhere in the world. Sadly today for having such views today’s so called Republicans would call her a right-wing fascist.

Marion was perhaps unique in Irish Republicans in that her parents, brothers, husband and son have all served time in various prisons for their involvement in Irish republicanism, likewise her home has been raided by British Forces, the Tans, The Broy Harriers and the Branch. During a raid in the 90s she commented that “you have been raiding this house for almost 100 years and you have never found anything, why do you think it will be different this time?”

Most of her siblings married into the movement as she herself did, and the wider family included members of all the different factions. She was a bitter opponent of any inter-factional fighting within Republicanism having lost many friends and comrades in internal disputes including Billy McMillen, Seamus Costello and Jim Flynn. Costello was shot around the corner from her home while Flynn was shot on his way back.  Flynn had been expelled from England in 1975 and was a daily visitor to her home and was treated as another son, his death took a huge toll on her and on Leo who was with him when he was shot.

She remained good friends with those who had gone their various ways, and this was shown clearly at her 80th birthday party where Republicans from all over the Country celebrated.

In later years she attended independent commemorations and none more so that a local one organised by the Inner City Folklore Committee, where she would lay a wreath, she was also proud to unveil a plaque in Foley Street commemorating the women from the area who took part in the Rising which included her mother’s name.

There is currently a view that the participation of women in the revolutionary period was written out of history: but this is a very simplistic view and is not one she shared. She saw her role as being in the service of the Republic to achieve freedom, her goal was the freedom of the Irish Nation from imperialistic rule be that British or European, it was not about ego or personal advancement. She was proud that her mother’s death notice stated that her mother acted to assist her husband in his duties as an IRA Captain, likewise Marion was proud to see in “The Lost Revolution” that Leo was described as “a significant but low key member of the army”.  She saw that as a fitting tribute to her family’s lifetime of involvement.

Neither Marion nor her family wanted to be in the public domain, they wanted to work away quietly and in secret to advance the cause, just like thousands of people up and down this country who have worked in the background over the decades. She believed that it is that silent majority who are the backbone of Republican resistance who will carry the torch of Irish Freedom to the next generation.

Marion passed away suddenly in November 2015, she had hoped to make it to Easter 2016, her funeral showed the respect in which she was held, during her wake her bed was adorned with the Tricolour, Starry Plough, Cumann na mBan and IRA Dublin Brigade flags, along with her beret, gloves and Sam Browne Belt while a guard of honour of four women in battle fatigues stood guard. Her funeral cortege was led by a Guard of Honour in uniform, while uniformed members of Fianna Eireann also attended. 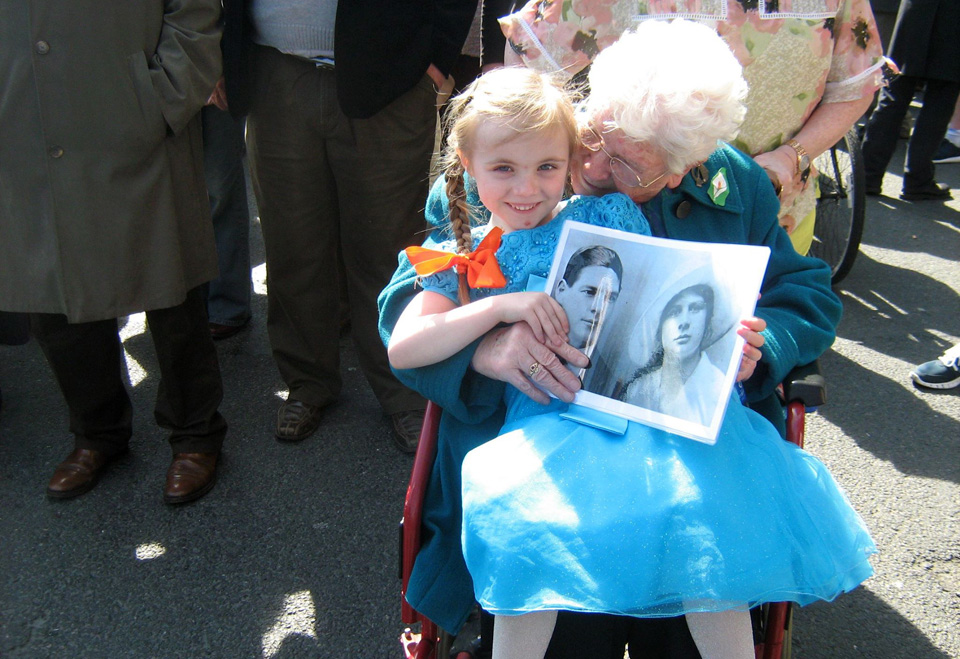 Inner City Folklore Comm, with her great granddaughter Taylor and a photo of her parents 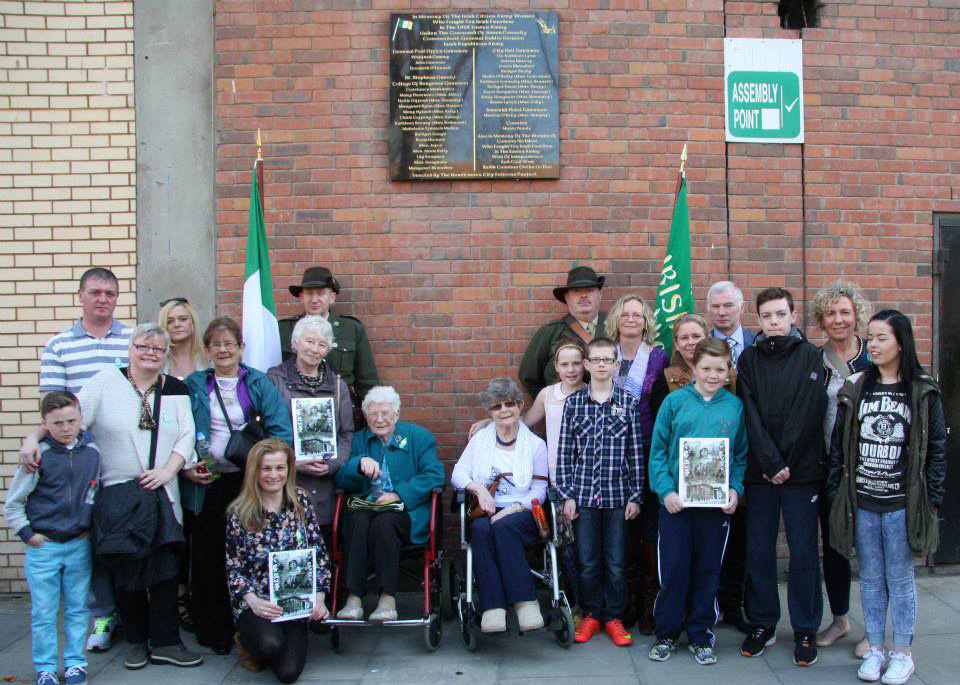 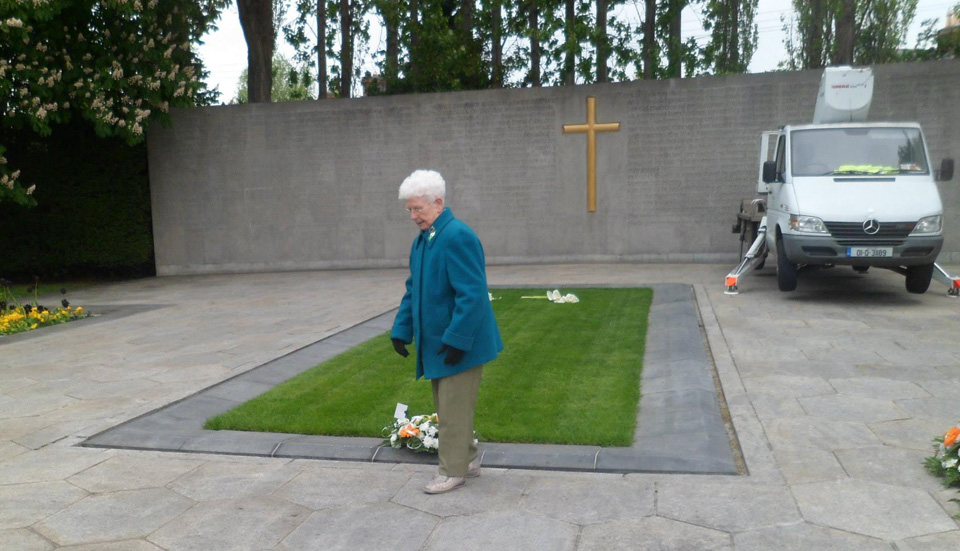 Laying a wreath at the Independent Rep Commemoration, Arbour Hill 2014

Malachy Steenson is a solicitor, criminologist and political commentator from Dublin