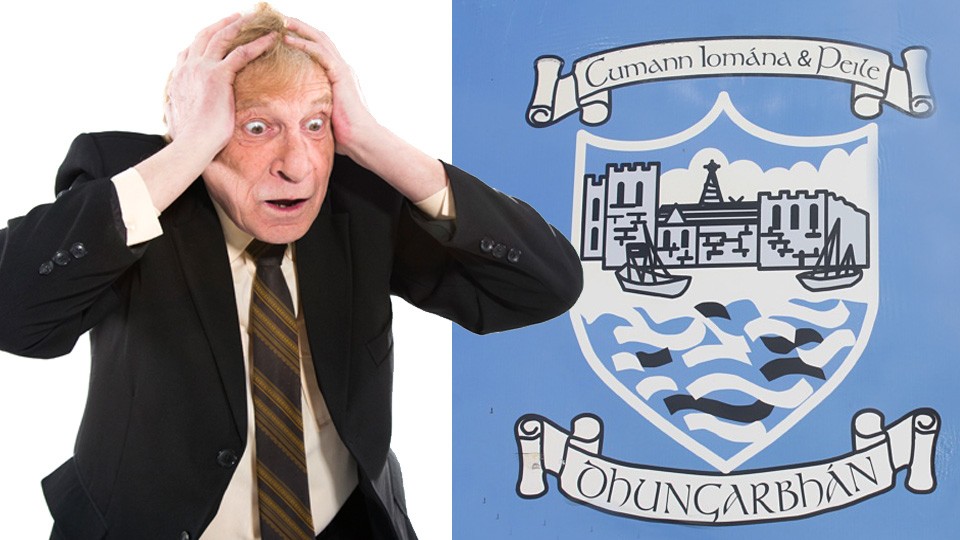 The latest episode in ‘How the ‘Gah’ infected the country with the Plague’ came with the news that Waterford County Board is proposing to strip Dungarvan GAA club of its intermediate football title.

Unlike other episodes, such as the one in which the Blackrock hurling club in Cork and it’s crazy supporters supposedly embarked on a Bidenesque coke-fuelled germ spreading Last Days of the Roman Empire par – tay, the Waterford incident was relatively minor.

The sacred Fact Check reveals that Dungarvan fielded a player who had undergone a test on the Thursday prior to the final on Saturday October 3, and was then revealed the day after the match to have contracted the virus. He had gone home after the game and not taken part in any post match celebrations.

The vital information to me appears to be that the player in question was not deemed to have the contracted the virus prior to the match, and perhaps more importantly was clearly not feeling ill during the days leading up to the game, nor on the day of the game as otherwise he would not have been selected as part of the panel for the final.

Nor does it appear that his testing positive caused him any subsequent health issues, nor infected anyone else to the extent that they required hospitalisation. And you may be certain that just as with all the other scare stories, that we would have been told had this been the case.

The rule under which Dungarvan are being penalised is 7.2 (e) which deals with “Misconduct considered to have discredited the Association.” It’s a pretty subjective rule, and there are already strict rules regarding player eligibility. But as one senior GAA official who I asked about this told me, “there are no rules” regarding the virus and how being tested impacts on players and teams.

There are, of course, state guidelines that anyone who does have a test should self-isolate pending a result. We all know I think that many people who have a test do not follow that protocol. We also probably know people who take a test without having any symptoms or contact with people with Covid in order to get a clean bill of health so they can avoid restrictions they might otherwise be subject to.

One of the nubs of the issue is how seriously people take all of this, and how dangerous the actual virus is if contracted. We do not need to go over all the evidence that shows Covid 19 is not an especially lethal condition for the vast majority of people. That applies even more considering the age and underlying health of people engaged in competitive sport.

There is also the undoubted fact that those in the media who make the running on all of this have built in biases that greatly eschew the manner in which the impact of the virus is reported. They have a judgemental attitude towards all the great unwashed and unmasked who might place themselves and their buddies in danger.

We have seen multiple examples of this. Soon after Philip Boucher-Hayes – who as a matter of interest attended a boarding school where the GAA is not part of its sports programme – had tut tutted over the behaviour of the peasants, he interviewed Barry Geragthy the great national hunt jockey. (Mutters “Go on the Moscow” sotto voce.)

Given Boucher-Hayes’ concern for public health you might have thought it would have occurred to him to ask Geragthy what he thinks of horse racing going ahead. Anyone who follows horse racing, as I do, will know from watching that restrictions on the numbers attending or indeed social distancing no more apply, nor present no more a danger than they would at a team sports event.

Claire Byrne had a poll on her TV programmes asking viewers whether the GAA county championships should be held. Did it occur to her to ask the same question about rugby, or did she or anyone else on Tverskoy Boulevard rebuke the FAI for going ahead with matches within days of squad members testing positive?

or myself, as a GAA person, I find the whole guilt thing and sanctimoniousness and double standards irritating in the extreme. As pointed out before, most of those doing most of the lecturing seem to expect everyone else to take a hit while their lives proceed with minor adjustments, and none that will cause them to lie awake at night fretting over how they are going to make mortgage and loan repayments.

Or wonder whether their job or business will survive too much more of this.

The Great Fear of 2020: Is the new lockdown an over-reaction?