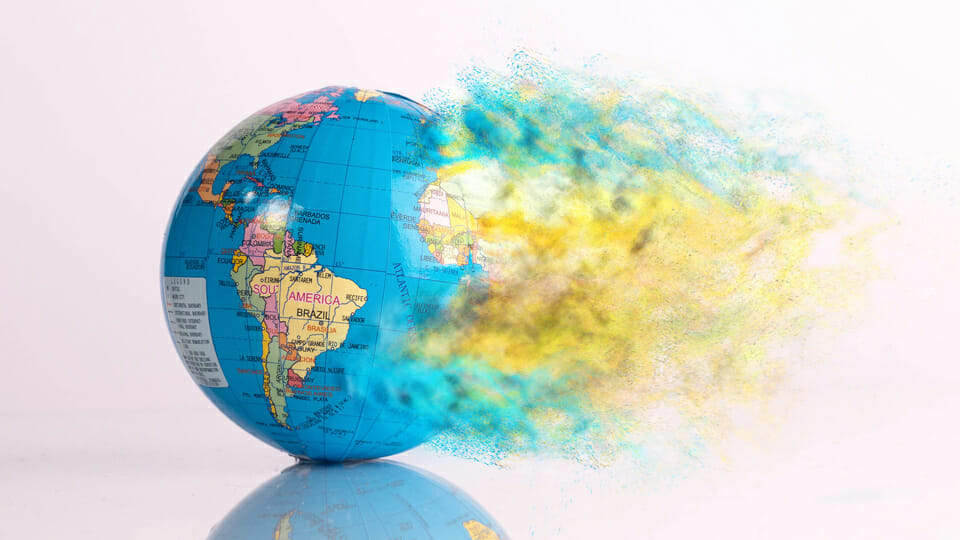 For weeks now, with the coronavirus crisis ongoing, many countries have implemented travel bans, and airlines around the world have found themselves grounded in unprecedented numbers. While this is obviously a disaster for the economy, it does present a unique opportunity: could this be scientists’ chance to prove or disprove man-made climate change?

To answer that question, we need to step back to the 12th of September 2001, when an event occured that went largely unnoticed in the chaos and horror of the Twin Towers attack.

In the 24 hours after 9/11, for the first time in decades, the skies above the USA were cleared of all civilian aircraft. From humble little cessnas, to majestic 747s, nothing moved. The shutdown lasted for just over 3 days, but that was long enough for meteorologists and atmospheric scientists to notice something totally unexpected. As the radar screens above the America cleared of planes, so the skies all over the continental USA cleared too.

As reported in a great 2016 article by Global News, Andrew Carleton, a geographer from Penn. State University, recalled: “I remember walking to and from my office (in the days after the 9/11 attacks) and thinking how incredibly clear the skies were”.

The emergency abated, and within 3 days some flights resumed in the USA. But this sudden phenomenon of a clear upper atmosphere got some people thinking, and when the dust had metaphorically settled, a geographer at the University of Wisconsin named David Travis and some of his colleagues wrote a paper arguing that the thin clouds created by jet liner contrails had the effect of reducing the range of temperatures on earth.

Subsequent studies had similar findings, with one noting that after a World War 2 air raid in May 1944 involving over 1,400 aircraft, the temperature was measurably lowered in England. Additionally, in 2004, NASA scientist Patrick Minnis noted that “increased cirrus coverage, attributable to air traffic, could account for nearly all of the warming observed over the United States for nearly 20 years starting in 1975.”

Finally, in a 2005 paper, a physicist named Robert Noland of Imperial College London even went so far as to suggest airliners be forced to fly at lower altitudes as he was convinced that the current ‘Global Warming’ phenomenon was largely contrail related.

Flash forward to 2020’s Wuhan coronavirus, and in the last few weeks, the world’s planes have been largely idle whilst its people are on lockdown. This unforeseen and unwanted event offers us the chance to test Noland’s theory that contrails are in large part responsible for ‘global warming’.

In fact, the 9/11 event shut down the skies over one continent for 3 days – the Wuhan shutdown is global, currently in its third week, and seems to have some weeks left to run. Because of the coronavirus shutdown will we see a fall in average global temperatures over the next few weeks and months? If that in fact happens, and the aim of the global community is to regulate the earth’s average temperature as climate alarmists claim, then there may be a simple solution: mandate jets airliners fly 31,000 feet in summer, and 24,000 feet in winter, as per Noland’s recommendation. On top of this, all those who fly can be charged slightly more per ticket to defray the cost of the extra fuel burned. There could be an argument for scrapping all greenhouse and carbon taxes and focus on a more practical solution.

Of course it may be the case that climate activists persist in pushing green taxes even after the evidence is in, because some so-called climate change policies have more to do with social engineering than geo-engineering.

This strange natural experiment may be a rare silver lining in the Wuhan virus cloud.

Hungary’s abortion rate plummets as new family policies are brought in: No income taxes for women with 4 kids