Controversy in Clondalkin as Bartra pushes ahead with Chinese-sponsored project 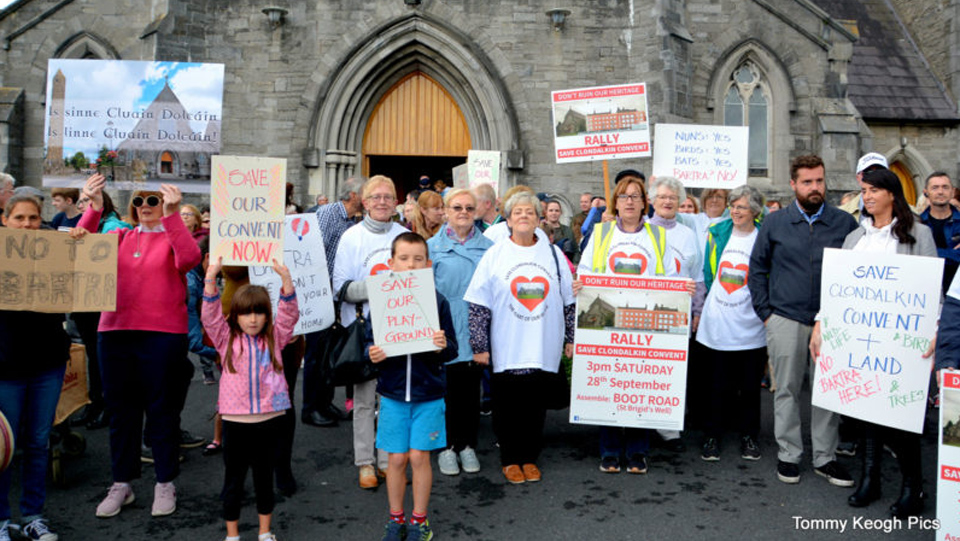 Plans by development company Bartra to build a 155-bed nursing home and assisted living units in Clondalkin village continues to attract opposition. A local group Save Clondalkin Convent has attracted a wide range of support, including from local elected representatives of all parties. There were a number of well attended protests in the village prior to the Covid restrictions.

Work began on the site last November following approval by An Bord Pleanála, after the land was sold to Bartra by the Presentation Order in 2019. The order has been in Clondalkin since it opened a school in the village in 1857 and those opposed to the multi story high density development are concerned about the impact it will have on the community.

Objectors have claimed that An Bord Pleanála allowed the proposal because the convent has not been properly designated as an archaeological protection site. That meant that the proposal was approved with provision for the developer to make changes to the older buildings and to completely change the appearance of the convent grounds and buildings.

One of the proposals, to allow for the use of stone from the old wall along Convent Road in the construction of a “plinth wall” appear almost kitschy. Likewise the reference to “sustainable transportation modes” seems somewhat gratuitous given not only the interference with a cultural site, but given the dubious sustainable and social benefit of nursing facilities of this type.

The whole issue of confined high-density accommodation for older people, as proposed in the Clondalkin venture has been highlighted by the Covid crisis. Given the vastly disproportionate number of deaths “linked to Covid” that have taken place in such nursing homes, is it really a model for the future? Let alone a lucrative target for non-productive capital?

These high density “social housing” builds are the core of the Bartra investment model. As we have highlighted before, Bartra’s nursing home and social housing projects have probably attracted the bulk of Chinese investment as part of the Irish state’s Immigrant Investor Programme. That scheme basically sells residency rights to wealthy investors who put at least €1 million of their money into such projects. The fact that much of this comes in the shape of purportedly beneficial developments helps to distract from the nature and motivations of the investment.

The notion that Bartra, owned by Richard Barrett who was one of those to contribute through his former company Treasury Holdings to the financial disaster of the noughties, is prioritising a new-found passion for social benefits might be taken by many with a grain of salt.

Treasury Holdings was wound up in 2012 with debts of €2.7 billion, €1.7 billion of which was owed to the National Asset Management Agency.

The rest of us, of course, continue to pay the tab for the gambling of high fliers who were born into money. They are far from being the “buccaneers” born without an arse in their trousers of fly-boy myth.

Barrett has since established his development company, Bartra, which facilitates the wealthy elites in China who are seeking overseas outlets for their cash. The role of the Chinese Communist Party in what are meant to be private businesses operated by its citizens in that country is no secret, and has been the subject even of EU concern which in October last established a screening programme to trace the origin of Chinese Communist Party (CCP) investment funds. That’s not to say the CCP are operating through Bartra, but that the authoritarian Chinese government retains control and influence over what even its wealthiest citizens can do.

Interestingly, the Irish state which would normally be the first to implement even the maddest of Brussels decrees has refused to take any steps to bring this into domestic legislation. Again, the supineness of the entire Irish political class with very few exceptions means that little or no scrutiny let alone criticism of Chinese involvement in Ireland ever sees the light of day.

Just this week, an initiative by Senator Ronan Mullen to call for a boycott of the Winter Olympics in China in 2022 secured just six signatures of independent Senators, including his own. This contrasts strongly with a growing international move to condemn the Chinese state’s policy of genocide against the Ugyhurs. The Canadian Parliament supported a motion to that effect in February against the wishes of the allegedly “rights focused” Trudeau, and the British Parliament is to debate a motion soon.

Here, there is barely a whisper about the ongoing fate of Dublin businessman Richard O’Halloran who is being forced to stay in China against his will. His plight has gained little attention.

The motivations for the massive scale of Chinese investment are also interesting. Writing in 2008, the French commentator Guy Sorman believed that it was a means of the Communist Party plutocracy hedging its bets in fear that their days were numbered, and that like other corrupt and brutal dictatorships that one day they might be forced to flee abroad.

That changed with the advent to power of the Xi faction in 2012. Xi, believed to be worth billions himself with much of it in overseas bank accounts, was having none of that namby pamby stuff. He has revived the more brutal totalitarian aspects of party rule, and curbed any hint that other wealthy parts of the apparatus might either lose their nerve, or think about challenging the leadership.

He has also “re-imagined” (to use the phrase much beloved of his degenerate leftie and corporate admirers here and in the other western countries) the purpose of overseas investment. This has been formalised in the Belt and Road Initiative. While its driving force remains the trousering of vast amounts of money for the party bosses and their brats, it now has a sharper ideological aspect.

As the EU and the Trump administration came to realise, what the west is facing is no normal investment programme by an economic elite, but a project by that elite, which is often inseparable from the Communist Party, to expand Chinese political and ideological power across the globe.

The more naïve western pathics of the CCP used to try to delude the world and maybe even themselves that Chinese “gangland capitalism” would smooth the rougher edges of a regime that is based on the corpses of tens of millions of its victims. A regime that is still based, contrary to the fluff propagated by the China Ireland Institute and others, on the mass impoverishment and brutalisation of its own people.

Like Stalin’s Soviet Union the basis of economic development was and is the basic servitude and extortion of the rural population. To that the CCP is in the process of adding the unending debt servitude of the peoples of Africa and elsewhere.

Is that what our elite wish us to buy into?

Is Josepha Madigan the right person to advocate for children with special needs?

Green TD who negotiated Programme for Government: “It doesn’t make much sense”