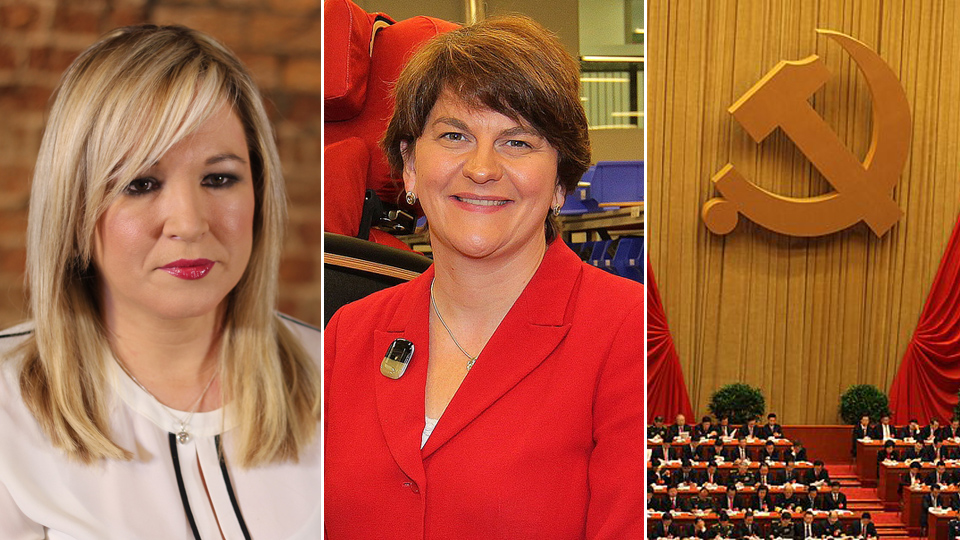 Serious questions have been raised about  a conference call between the First Minister Arlene Foster and Deputy First Minister Michelle O’Neill, and the Beijing Consul General Zhang Meifang, where it is alleged both politicians indicated support for the current repression of Hong Kong by the authoritarian government in China.

The Consulate claimed that during the meeting Zhang had read a statement from the Chinese government outlining their position on the crackdown in Hong Kong and claimed that in reply Foster and O’Neill had indicated that: “Northern Ireland cherishes friendship with China,” and more to the point “understands and respects Hong Kong’s national security legislation.”

Not unnaturally this came as a bit of an embarrassment to the Executive which responded by stating that the Consul report did not accurately reflect what was said. The above statement was removed by the Consulate after the Irish News broke the story.

On Tuesday, Foster stated that she would be writing to Zhang outlining her support for the British government’s position regarding Hong Kong, but it was not clear if O’Neill would sign on behalf of Sinn Féin. There have been calls for the minutes of the conference call to be released and for the Executive to condemn the Chinese repression in Hong Kong and of the genocide against the Uighurs.

If O’Neill did endorse the Chinese position on Hong Kong she was adhering to a consistent pattern of Sinn Féin support for the regime. As reported previously on Gript  at an August 2019 meeting between then Sinn Féin spokesperson Seán Crowe and the Chinese Ambassador to Dublin He Xiangdong, the Embassy claimed that support had also been offered for the regime.

The embassy stated, with no denial from Sinn Féin, that Crowe had welcomed the Ambassador’s clarification of the situation in Hong Kong and expressed the hope that it would be “back to the right track as soon as possible.”

A large number of MEPs from across the various groupings signed, but none of the Sinn Féin MEPS, and only one member of their GUE/NGL group of 39 did. Indeed, in April 2019, the Sinn Féin group described criticism of China as reverting back to the “Cold War era,” and that China was in some bizarre way immune from criticism on the basis that it had not created “colonialism and imperialism.”

This might come as news to the people of Tibet which was subject to genocide following the Chinese annexation in 1950.

It will be interesting to see what more emerges regarding the meeting with the Consul, and whether the Northern Executive will follow other elected bodies in openly criticising the current stance of the Chinese.

Sinn Féin ought also be put on the spot as to why, especially given their insufferable virtue signalling on all manner of issues, it should be so sympathetic to the totalitarian monster of the Chinese Communist Party.

Of course they are not unique in this, as many western states and parties have displayed a similar obsequiousness towards Beijing. Much of this is motivated by economics and the search for investment capital and investment opportunities.

While such matters are claimed to be beyond the final say of the Stormont Executive as a “devolved matter,” Sinn Féin’s entrepreneurial wing has never let such things interfere with its own financial interests.

Ireland Facing the Harsh Reality of an EU, Minus Britain