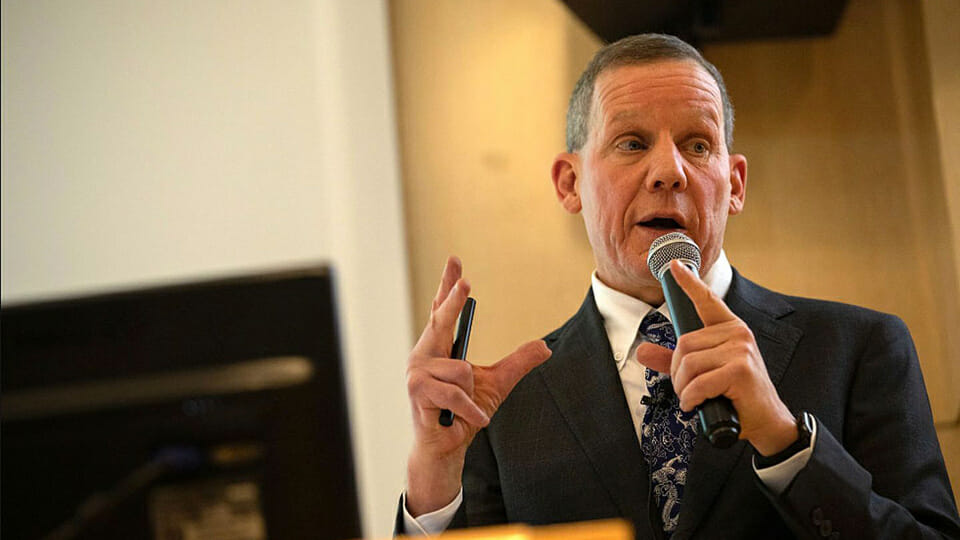 The uncovering of an espionage plot at the heart of a Harvard advanced research lab, might be just the “tip of an iceberg” says retired American air force General, Steve Kwast.

In a long ranging discussion on the technological arms race betwen the USA and China, covering issues from 5G to the emerging strategic domain of Space-Force, retired 3 Star General Kwast, hinted that China’s theft of intellectual property and research findings, was widespread.

The United States Department of Justice (DOJ) announcement at the end of January that it had arrested Dr. Charles Lieber, Chair of Harvard University’s Chemistry and Chemical Biology Department, on charges of “aiding the People’s Republic of China.”

The arrest of a Chinese agent in a US Government funded laboratory harks back to Cold war espionage, and that is exactly what it is, except that it is part of a wider economic and cultural war between China and the West which is being carried on in plain sight for the most part. This war has seen China steal technological patents, buy up infrastructure, and in a more  sinister move, buy influence within the academia of its competitor nations.

The charges against Dr. Charles Lieber, a pioneer in the field of nanoscience and nanotechnology who was recognised as the leading chemist in the world in the decade 200-2010 by Thomson Reuters, is one case in point.

Dr Lieber was recruited by China’s Thousand Talents Plan – a strategy of enticing the expert personnel of western universities and industry to China. It includes aggressive recruitment, but also the type of espionage and alleged intellectual theft that saw Dr. Lieber charged with “making a materially false, fictitious and fraudulent statement.”

Lieber, who is Principal Investigator of the Lieber Research Group at Harvard University, has received research grants of more than $15m in federal grants to carry out his research. With his reputation he would have been a major prize for China’s talent and knowledge acquisition program.

Unknown to Harvard and the government granting organisations (which included the Department of Defence, DOF) Lieber became a “Strategic Scientist” at Wuhan University of Technology (WUT) in China, and was a contractual participant in China’s Thousand Talents Plan. Lieber denied these facts at the time of the DOF granting process. Lieber, it later transpired, was in receipt of $50,000 per month from WUT. The DOJ announcement also revealed two lab workers were charged with conspiracy and attempting to smuggle vials of biological research to China.

This case highlights a wider strategy of acquisition and influence by China, by any and all means. Chinese student enrolment in American and Australian universities bring a welcome cash injection to financially flailing academia. American cash-strapped universities for instance have benefited from Chinese investments of $436M since 2011.

The establishment of Confucius Institutes, ostensibly to foster cooperation and exchange, but which are seen as propaganda and monitoring institutions, are part of this investment by the Chinese Communist Party. There is a Confucius Institute in UCD.

What do the Chinese government get in return for this investment? Academia in the US and Australia (and Dublin) might see it as a solution to the astronomical inflation in third level fees and the corresponding problem of student debt (estimated at $1.5 Trillion in the US). It is hardly to be expected that an authoritarian state should pour money into the intellectual infrastructure of its competitors from a sense of altruism. It is more likely that this is a continuation of the Belt and Road initiative of Chinese economic expansion through infrastructure, and now through culture.

Thinkers such as Peter Thiel (joint founder paypal and technology investor), have warned of the effect of China’s growing economic power. He says that the 1990’s optimism that China would democratise after it benefited economically from opening its markets has proven completely wrong. China, despite growing GDP and personal wealth, has not become a more free society and in fact is using its competitive advantage to reinforce its brand of communist repression.

Early entrants into the Chinese market such as Motorola have paid dearly for not realising this. They entered the Chinese market in 1998 and handed over their intellectual property rights as a condition of entry. Six years later they were bankrupt and the Chinese communication company, Huawei, had risen from their ashes.

The recent protests in Hong Kong, and revelations of Uyghur repression in the Xinjiag province, have highlighted the shocking and repressive nature of the Chinese Communist Party. Thiel says that, watching the fall of the USSR, what China learned and implemented was that to avoid the fate of communist Russia, “they must have Perostroika without Glasnost; get rid of the Marxism and not get rid of the Leninism.”