Carers protest: ‘government is exploiting us and we are in crisis’ 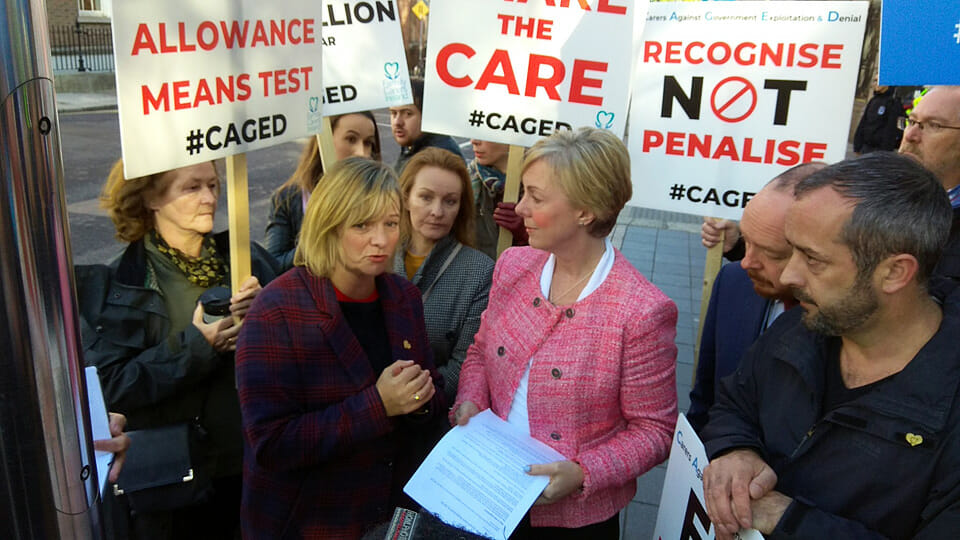 Family carers are protesting outside the Dáil today to voice their upset at the Budget’s failure to deal with what they term as a “home care crisis”.

They point out carers are saving the State some €10 billion in costs annually, but say those providing care are not getting the support they need.

“Family carers feel that Government has ignored them and denied them. We’d go as far as to say Government is exploiting family carers, ” Catherine Cox of Family Carers Ireland said.

Family Carers Ireland's Catherine Cox has presented Minister @ReginaDo with a petition with 1,500 signatures outlining family carers anger & disappointment with #Budget2020 and highlighting the urgent need for action. You can still sign our petition here:https://t.co/KHZTLXcxK7 pic.twitter.com/J5a6iV7PLa

Carers are particularly upset that Paschal Donohue’s Budget 2020 did not address the pressing issue of the Income Disregard Allowance  – how much money a carer who works extra hours in another job can earn before having their carer’s allowance cut.

Family Carers Ireland say this could lead to carer’s losing income when they try to ensure they might have a career or a job to return to after caring duties may come to an end.

They point to a recent survey of family carers which showed that almost 2 in 3 carers are providing more than 100 hours of care per week.

Some of the findings have been described as shocking and worrying.

They say carers are at the mercy of a “postcode lottery” with huge disparity in services depending on where a family lives.
Family Carers Ireland also says thousands of carers are reaching burnout. “It’s a crisis and we’re being ignored by the government,” Catherine Cox said.

Two Irish test positive for coronavirus, two others not screened on return to Ireland